The construction boom at BGSU shows no signs of slowing down. The next several years will bring major changes to campus with the addition of new buildings and renovations to existing structures. 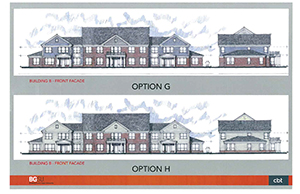 This month the demolition of the Greek housing units along Wooster and Thurstin streets will begin, making room for an improved townhome-style development to be built along Wooster where the current Conklin Greek units now stand.

The $30 million project will consist of 10 buildings housing 33 different chapters. The buildings will be broken up into three types — units with four bed levels, 12 bed levels and 18 bed levels, for a total of 426 beds.

"We did an extensive look nationwide at other universities that had done Greek villages and many are getting away from single chapter houses," said Steve Krakoff, vice president for capital planning and campus operations. "This is going to be a very classical-looking Greek village.

"The layout will have an urban townhome village feel — courtyards, walkways, green spaces, hardscape, a very elegant development that will be an important part of the University as you approach from I-75."

The townhomes are expected to be ready for occupancy in the fall of 2016.

Krakoff said one of the major focuses on campus is the revitalization of the academic core. This involves changes to eight academic buildings. 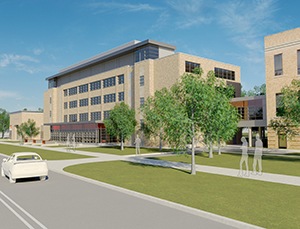 The South Hall upgrades are currently underway. When they are completed, South Hall will be the new home for the School of Media and Communication. The building is getting a gut renovation along with an addition on the western edge. The interior demolition will start this month, with the hope of having faculty and staff moved into the building by fall 2016.

The addition will include video and production facilities, while the first floor will feature a convergence lab geared toward training people in many types of media. Student media will call the new space home as well.

Once the transition to South Hall is complete, West Hall, the current home of the school, is slated to be demolished.

Moseley Hall will be also be getting a gut renovation and will become the location for undergraduate science labs. Sections of chemistry, biology, anatomy, physiology and other science disciplines will utilize the space for high volume classes. In addition, the Medical Laboratory Science Program will be relocated to the first floor of the building.

'The mission of that project is to serve as sort of a teaching lab home for undergraduate science majors, health profession majors, and a broad cross section of our general undergraduate student population that needs to take a science lab course," Krakoff said. "It will probably serve more than half of our student body when it's done."

Krakoff said he hopes to start the design of this project by the end of the year.

Hanna Hall will become the home of the Visual Communications Technology program. The hope is that moving it closer to South Hall and the School of Media and Communication will help foster collaboration between the two programs.

Eppler Hall will be become the academic home for all the human development programs in the College of Education and Human Development. Krakoff hopes to begin renovations to that building in 2015.

Over at Olscamp Hall, the building will get a number of classroom and public space upgrades to give it a fresher look. The Center for Faculty Excellence will also move into that building.

Renovations will also be done on the Health and Human Services building formally occupied by the Health Center. Renovations made on the first floor and basement will provide much needed space for advising, faculty offices, classrooms and research labs. Additionally, the Food and Nutrition Program will be physically located in the building. The project is currently in the design and development stage.

Krakoff said the University has yet to finalize the schedule for the business building. When finished, it will dramatically change the look of campus from Wooster Street and provide students an educational experience unlike any other on campus. 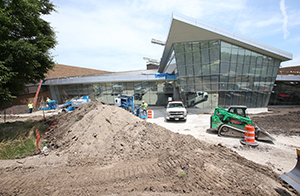 The new building is expected to occupy part of parking Lot A, near Carillon Place dining hall and behind Kohl Hall, and will focus on the idea of innovation and collaboration among faculty and students.

"We are going to bring faculty units closer together to promote different levels of interaction and collaboration among faculty groups," Krakoff said. “The design also will have a lot of spaces to foster student-to-student collaboration and faculty-to-student collaboration. It's about bringing people together and driving creativity. We will have cutting-edge classrooms in the building, but also learning spaces that function like design studios to promote creative business thinking.

"When you look at some of the design precedents we incorporated, you will see a lot of examples from some of the most creative companies out there like Pixar and Microsoft. We want to create an environment that is more like the progressive businesses of the future." 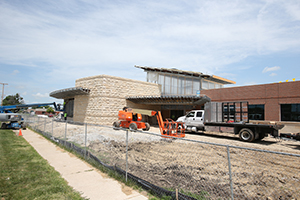 Additional projects wrapping up this fall and at the end of the year are the renovations to the Student Recreation Center, the opening of the new Bureau of Criminal Investigation building and the construction of a new aviation center and hangar.

Heating and air conditioning upgrades to the Moore Musical Arts Center will also be completed, which will allow BGSU to become a Steinway piano-certified University.

Major projects slated for the next several years include the demolition of the Harshman Quadrangle Residence Hall, the Administration Building, West Hall, and Family and Consumer Sciences. Krakoff said those changes will drastically alter the look of campus, opening it up to the city and significantly improving the edges of the University and its gateways.