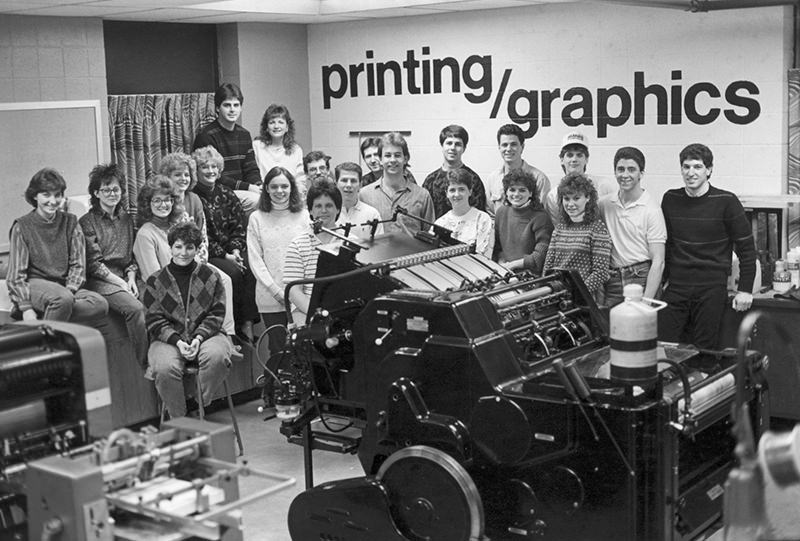 Students in the VCT program in the ‘70s and early ‘80s focused a lot on printing and graphics, before the Macintosh computer was introduced in 1984, significantly changing the industry and the curriculum.

Dr. William Travers Jerome III was a change agent when he arrived in 1963 as the sixth president of BGSU.

For one of his initiatives, Jerome hired Dr. Jerry Streichler to lead a major effort to develop and implement curricula that would more truly reflect the technology (processes and organization) of various categories of industry. The goal was to replace the “shop teacher” education programs with curricula that would better prepare teachers for the schools and also prepare specialists to serve in leadership positions in diverse industries.

The success of those curricula led to significant growth in the department and to its becoming a school, and then a college. It also earned a new building whose innovative classrooms and laboratories facilitated the effective offerings of the innovative curricula. The work to develop the Visual Communication Technology (VCT) program is illustrative of the successful approach.

“We realized that the old printing press and typesetting system needed significant updating,” Streichler said. “These were clear evidence of failure to keep up with developments in industry. It didn’t take much to connect the changes in printing and photography and marry them to television, the computer, and new means of publication. Adapting and putting them together in innovative ways produced a unique, exciting and rewarding (to students, and professors) curriculum.

“The remarkable team that we fortunately assembled in 1970 deserves much credit and recognition for their extraordinary creativity and vision. The innovative team included Dr. Dick Swanson, Dr. Gene Poor and Dr. Dick Horton.”

Poor came to BGSU from Kent State to finish a doctoral degree. He joined forces with Swanson and Horton to bring the program to fruition.

“The goal was to create graduates whose education was meaningful to U.S. industry, in part by emphasizing activity in laboratory learning and the practice of it in an industrial setting via the cooperative education program that was developed alongside,” Streichler said. “Gene was instrumental in creating the VCT program.”

Through some consulting work with big-name companies, Swanson and Poor realized there were communications problems at those companies. “I could tell, based on who I was talking to, what the problem was and what their solution would be,” Poor said. “Photographers would resolve the problem with photography; film people would create a film, and graphic or print folks would create a brochure.

“We decided we needed a program that produced generalists in technology across all media. It had never been put all together like that.”

In 1973, Streichler and Poor created the concept of “gifted generalist” as the foundation for the program. A matrix was created that covered media, film, television, photography, print and multimedia. Students might be interested in careers in sales, marketing, design, production or teaching.

It was decided that the curriculum would take an original approach by providing a general overview of each of these categories, and then allow students to choose from a cluster of classes in the areas that interested them most.

“Adding to our students’ value in the workplace was that they could serve as intermediaries between various special disciplines,” Poor explained. “They could function between engineers and designers, between managers and line personnel, between sales and purchasing.”

Students developed these abilities through the hands-on learning they experienced in the laboratories and classrooms and their mandatory internships before they graduated.

The novel concept caught on quickly, in the classroom and in industry. Enrollment skyrocketed from zero to 200 students in a short time, and graduates were getting jobs. As the program grew, the need for additional faculty became necessary. Barry Piersol and Chuck Spontelli came on board and helped drive the growth of the program to more than 300 students.

The biggest change to the program came in 1984 when the Macintosh computer was introduced.

“That changed our lives because, then, everything could be done on the desktop,” Poor said.

“The VCT program was good in 1973, but it became a great program in 1984,” as evidenced by the consistent enrollment of approximately 500 students in the program, he added.