There are fans, and then there are those rare “super fans” who support their team through the good times and the lean years, and display a perpetual, unconditional and unwavering loyalty.

Few can match the allegiance of John Kunstmann.

The retired geography professor has season tickets for BGSU men’s and women’s basketball, hockey and football. His football attendance dates back to 1964 when the Falcons played in University Stadium in the heart of the campus.

His seats were in the back row there, against a concrete wall, but when Doyt Perry Stadium opened in 1966 with a lot more room, Kunstmann opted to stay up high in the seating chart.

“I wanted a better view than the coach had,” quipped Kunstmann, who admitted he came to BGSU as a self-proclaimed “sports junkie.”

He had attended a high school in his native Chicago that did not have a football team, and the University of Chicago dropped its program when he was very young.

“I guess I was starving for football when I got here,” he said.

Kunstmann was one of the first season ticket holders at Doyt Perry Stadium, and he still has those season tickets today, nearly 50 years later.

“We stuck with them and we’ve supported that team for a very long time,” he said. “We’ve met a lot of very nice people over the years, and we’ve really enjoyed the players and the coaches. We’ve seen a lot of change, that’s for certain, but we’ve remained loyal fans through the years.”

Kunstmann’s wife, Jane, joined him at the Falcon sporting events after they were married, and they did not let foul weather deter them until recently. 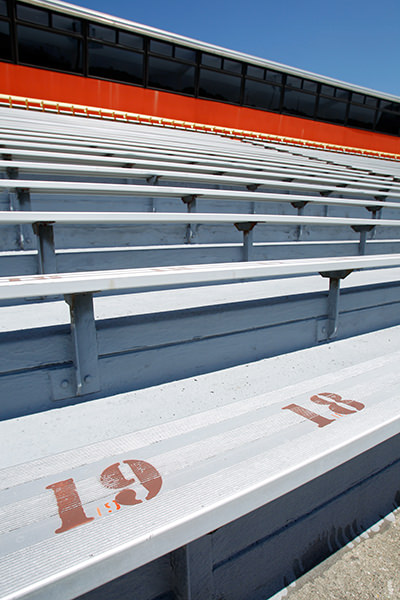 “I was a football fan, too, and I’ve always enjoyed going to the games,” she said. “We went whether it was hot or cold for a long time, but since we’ve gotten older, I guess we’re more fair-weather fans. But the support is still there.”

Kunstmann recently purchased another pair of football season tickets closer to the field at Perry Stadium, since that location is easier for his wife to reach, but his son now uses the seats in the original location.

“We kept them in the family,” Kunstmann said. “We’ve seen many, many games over the years and quite a bit has changed with the campus and the football team, but we held onto those seats – Section 16, Row 27, Seats 18 and 19. There are some things you just don’t give up.”

Holding those season tickets since the facility’s debut has enabled Kunstmann to see all of the signature historic games at Perry Stadium, including the 13-0 win over Dayton in the first game played there, on Oct. 1, 1966. He also recalls the MAC record crowd of 33,527 jammed into the stadium for the 1983 game with rival Toledo, and the sellout crowds in 2003 for the Northern Illinois and Toledo games.

Kunstmann still shakes his head and winces as he recalls another crucial meeting with Toledo when the wind “had been blowing like crazy all game” but mysteriously die down just as BG’s rival went to kick the winning field goal.

“I saw it with my own eyes, but I still can’t believe that happened,” he said. “It must have made it over the crossbar by about an inch.”

Kunstmann said the different personalities associated with Falcon football have been interesting to observe, and a joy to watch. He got to see Perry in his final season, in 1964, when the legendary coach led the Falcons to a 9-1 record and a fifth MAC title in his decade as head coach.

He also recalls in detail the up-and-down 10 years Gary Blackney spent as coach of the Falcons, and the two years under the dynamic Urban Meyer. Kunstmann said he is excited to see the fast-paced offense that new head coach Dino Babers has brought to the program.

“If things move as fast as he wants them to out on the field, I’m not sure my eyes will be able to follow it all,” Kunstmann joked. “But there’s always another level of excitement when a new coach comes along. We’ll probably see some new star players emerge this season, once this system gets rolling.”

“Over the years, the coaches have changed, the players on the field have changed, and the people in the seats around us have changed, but the overall experience is still enjoyable. We’ve always enjoyed going to the stadium for a game.”

Kunstmann also has witnessed numerous renovation projects at the stadium, and seen the addition of permanent lighting, a video board, a FieldTurf playing surface and the Sebo Athletic Center all enhance both the facility and the fan experience.

Kunstmann, who taught at BGSU for 32 years, said there was a considerable buzz surrounding the opening of Perry Stadium back in 1966.

“A new stadium was really needed, and I remember that when it was finally completed, people were amazed at how nice it was,” he said. “I had a friend come for a game, and he said it looked like the home of the Cleveland Browns, it was so good. It was truly state-of-the-art for the Mid-American Conference.”

As a loyal follower of all things in athletics with the Falcons, Kunstmann has traveled to many away games over the years, and joined the BGSU hockey team in Lake Placid in 1984 to see the Falcons win the national championship in a four-overtime thriller.

“I’ve always felt that it’s very important for the faculty, staff and the students, and the community, to support those teams,” Kunstmann said. “You get to know the players and the coaches, and you develop a real appreciation for all of the hard work they put in. They are representing Bowling Green, and that’s something we should all take pride in.”