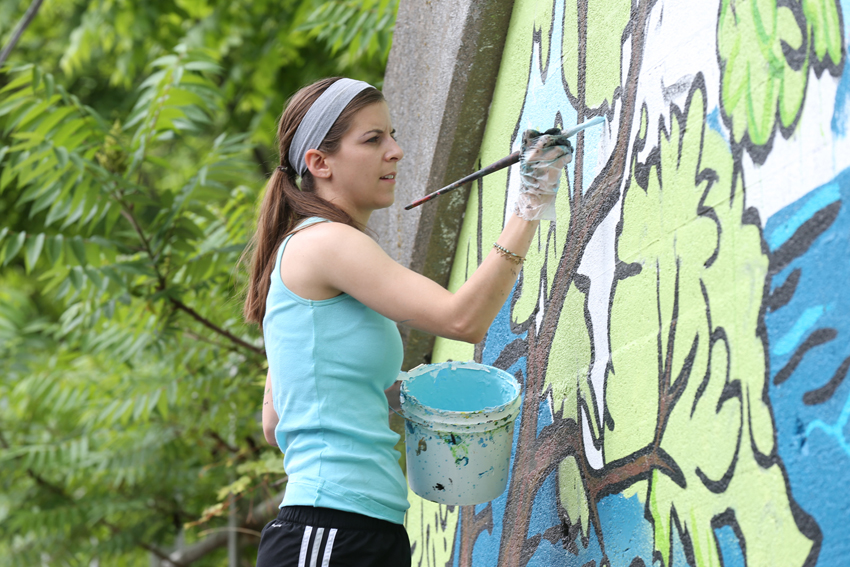 In parts of Toledo where beauty is in short supply, murals painted over the years by dozens of BGSU students and volunteers are bringing back a sense of neighborhood pride.

For the past four years, Gordon Ricketts, director of the Arts Village, has run a summer art mural workshop. This year, his class of 13 students was involved in five murals of various sizes scattered around the Old South End and East Toledo neighborhoods.

Ricketts started the class after working with the Sofia Quintero Art and Cultural Center to design and paint a mural along a viaduct in the Old South End. 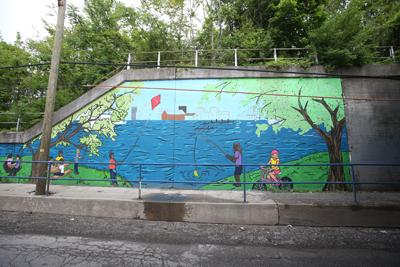 “Before we were even done people came out and used it as a backdrop for all sorts of events,” Ricketts said. “I decided it would be a good class and coordinated with the College of Arts and Sciences dean and Katerina Ray, director of the School of Art. We’ve painted close to 20 murals.”

This year’s murals were designed by Mario Torero, a San Diego artist who has been involved from the first mural, and Maura Meyers, a BGSU graduate and Perrysburg Junior High School art teacher.

Meyers’s design was painted along a busy stretch of East Broadway Street in East Toledo and depicts children enjoying the outdoors along the Maumee River. The East Toledo Family Center and GLISSEN, which works toward water conservation, had input in the design.

“We’ve had amazing feedback from all the neighborhood people,” Meyers said. “A lot of people have stopped by and brought us water and admired it. It feels really good that art is making a positive contribution to this neighborhood – making them feel good about where they live.”

Over on Broadway Street in the Old South End, Torero designed murals depicting the faces of Martin Luther King Jr. and Cesar Chavez. Students had to use a lift to complete the painting on the faded brick of a tall building.

“Students get to learn how to work with a large-scale space in a collaborative way,” said Ricketts. “They do develop painting skills, but they are also integrated into a culture and learn about the issues of public art. It’s not always art, and it’s not always clean.”

Collaboration is a large part of these mural projects. This year, students from nearby schools came out to help as well as the alumni of previous mural classes and community members. 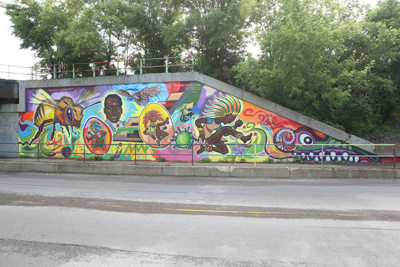 These communities have truly embraced the projects, Ricketts said. Three businesses in the Old South End have already contacted him about painting murals on their buildings next year.

“Nothing had been going on in this area that was visible. This is positive evidence that things are going on—to make it a place that people want to come and see the work. That should certainly promote businesses and community pride.”

Ricketts told the story of a teenage girl who watched the first mural go up during the drive to school with her father. She found Ricketts’s contact information and wrote him a letter.

“She said this was the first time anyone had done something positive in her community and that it made her proud to be a Latino girl. She was invited to visit BGSU and she’ll be a sophomore this year.”

This year’s murals were made possible through the help of BGSU’s Ethnic Cultural Arts Program, the School of Art, Arts Village, and College of Arts and Sciences, along with the Sofia Quintero Art and Cultural Center, Maria and Duane Winter, and the East Toledo Community Center.