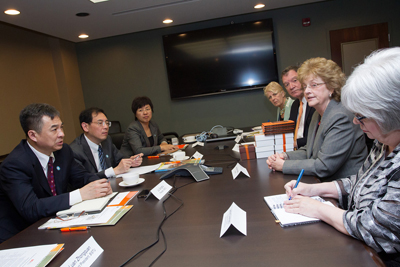 The academic partnership between the two universities was formulated by the two institutions’ previous presidents, so the day was an opportunity for the current leaders to get to know one another, said Timothy Chambers, director of undergraduate studies for the College of Business Administration, who is overseeing international programs for the college.

Of the five BISTU students now at BGSU, three are in the “three-plus-one-plus one” Master of Accountancy program, in which they spend the first three years of their undergraduate program in China, the fourth at BGSU making the transition to the American system and a further year in the master’s program. Another two students are management majors who began at BISTU and then transitioned to BGSU’s full-time MBA program.

“We’re hoping to expand our partnerships with BISTU,” Chambers said. The day’s agenda included opportunities for conversation between peers. Dr. Venu Dasigi, Dean, Interim of the College of Technology, Architecture and Applied Engineering, talked with Li Ning, dean of the BISTU School of Computer Science.

Dr. Michael Ogawa, vice president for research and economic development, and Dr. Maureen Wilson, chair of the higher education and student affairs department, are exploring the possibility of a partnership in College Student Personnel with the Chinese university.