A spring break trip in a warm climate with diverse people, food and culture sounds like an exciting vacation. But for four University students, their trip to India was also a valuable learning experience that will further their education and careers.

“I have always wanted to be a part of a project that involved collaborating with others from different cultural backgrounds, and this project was exactly that,” said Preston Stevenson, a senior environmental science major. 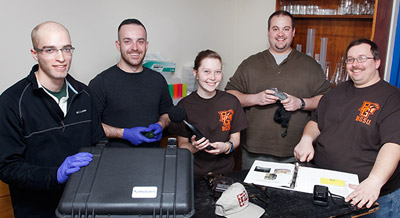 The trip, led by Dr. Andrew Gregory, assistant professor of spatial ecology in the school of earth, environment and society, was part of a multinational research project to investigate the effectiveness of conservation corridors, areas of habitat designed to connect and help preserve wildlife populations.

“The goal of conservation corridors is to provide for long-term gene flow and demographic stability by linking reserve areas,” Gregory said.

Gregory and Stevenson, along with environmental science majors Elliot Cantwell, Dave Baum and Emma Spence, traveled to the northwestern Ghats region of India. A 19-hour flight took them to Mumbai. From there, they traveled about six hours to a private wildlife reserve outside the small village of Umare, located near the Amba Tiger Reserve.

“This area is comprised of dry tropical forest and is one of the most biodiverse regions in the world,” said Gregory.

Gregory is working with the Applied Environmental Research Foundation (AERF) to collect measurements about forest health. Over the course of the next year or two, AERF will monitor the people and wildlife on the reserve to see how well conservation works. The ultimate goal is to maintain and stabilize the ecology so it can support more people.

“People are depopulating the countryside due to a lack of environmental concern, lack of care for the ecology, deforestation and overuse of the land,” said Gregory. “Sterilization of the soils over multiple generations has led to the land not supporting the people anymore, so they have to leave.”

On this trip, Gregory and his team set up cameras to capture how the people and wildlife are using the forest and what they are doing there.

“We were very successful in collecting good data on the structure of the forest and how, when and what people are using in that forest,” he said.

While they captured many people on the cameras, they also had pictures of a wild pig, porcupine, jungle fowl and wild peacocks. They were hoping to document more species but due to the current drought and hot summer months, many animals had traveled to the lower areas near streams and rivers.

"We were very successful in collecting good data on the structure of the forest and how, when and what people are using in that forest"“The areas where we were working had a lot of human presence, and some of your more charismatic carnivores such as tigers and leopards tend to avoid humans as much as they can,” Gregory said.

During the summer, India is extremely hot. When the team left Bowling Green, temperatures were in the 20s. But when they arrived in India, they experienced extreme humidity with temperatures reaching nearly 120 degrees.

“It was ridiculously and dangerously hot,” Gregory said.

Gregory’s team had to make sure they stayed hydrated. But having clean water available at all times was a challenge.

“I learned that water is far more important than I gave it credit for,” said Stevenson. “Coming from a country that can have clean, drinkable water right out of the tap, I can honestly say that I will never undervalue clean water again.”

Besides the extreme temperatures and lack of readily available clean water, students also had to deal with life in a foreign country.

“I definitely went through some culture shock,” said Spence. “It’s one thing to see the images of poverty and devastation but it’s another to experience it firsthand. It hits you hard.” 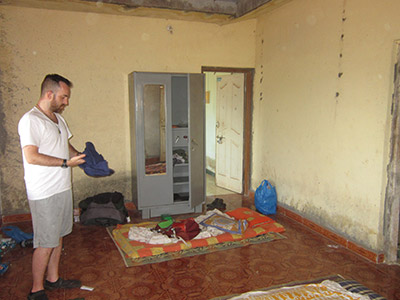 Gregory and his students stayed in a cabin that had the very basics: a mat on the floor to sleep on, a sink, bathroom and shower. They also had their meals prepared for them. But after eating the same meal of dal over rice for seven days straight, they decided to venture out to a restaurant for something different.

“We ordered three tandoori chickens, two big bowls of fried rice, assorted mixed vegetables and garlic naan, and in 15 minutes, it was gone,” said Gregory. “Others in the restaurant were watching all of this take place with a look of shock on their faces!”

That was one of many favorite moments for Gregory. Stevenson said communicating with the locals was a highlight of his experience.

“The locals knew we were trying our best to explain what we wanted and more than once the situation ended with both parties laughing and smiling at the frustration of it all. It was then I learned that a smile is universal,” he said.

Not only did the students learn lifelong lessons, they cherished what they learned in the field.

“The experience really solidified my desire to work in the environmental and ecological field,” Cantwell said.

“I learned invaluable lessons in regards to fieldwork during this trip which will benefit my career path in a multitude of ways,” said Stevenson.