BOWLING GREEN, O.—It’s a rare person who possesses sterling qualities both personally and professionally, but Carroll Feasel is one such person. Her colleagues in Bowling Green State University’s College of Health and Human Services want the rest of the world to appreciate her as they do.  Their nomination earned Feasel the 2014 Michael R. Ferrari Award — the highest honor given to administrative staff. 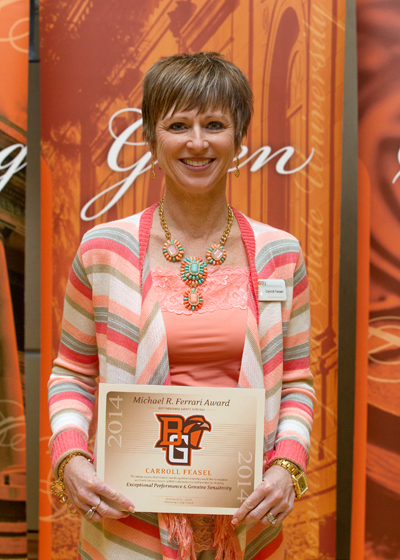 Feasel, executive assistant to the dean and college budget director, received $1,000, a reserved parking space for a year and plaque in her honor that will hang in the Bowen-Thompson Student Union, presented at the Administrative Staff Council annual reception April 24.

Named for former interim president “Mick” Ferrari, the award recognizes those who represent the values he exemplified: demonstrated excellence in one’s work while also promoting harmony, having strong relationships with the University community and being committed to the growth and betterment of BGSU and its students.

Dean Marie Huff said that Feasel’s qualities quickly became apparent to her when Huff arrived on campus last January to serve as dean, and she has already developed a “deep respect and appreciation for the work Carroll does in behalf of the college and the University.”

Huff and other nominators noted the stability Feasel provided for the college during the transition between the last dean, two interim deans and two interim associate deans.

Associate Dean Nancy Orel, who was appointed acting dean in August 2013, said her regard for Feasel grew even more during that time. “Carroll Feasel is by far the most conscientious, dependable, resourceful and competent person I have worked with in my 20 years of being an administrator and my 14 years in Academe,” Orel wrote.

Along with her many other responsibilities, Feasel has also without complaint assumed additional duties since the departure of a secretary in January, Huff said, often arriving early and leaving late, even responding to emails at night and on weekends.

Even though she is frequently “bombarded with requests from college faculty, staff, students and others, she always responds to those requests in a timely and professional manner,” Huff wrote, and has positive and pleasant interactions with everyone.

“Amazingly, Carroll always has the correct answers to any questions as well as the appropriate solution to any problem anyone would ever pose to her,” Orel said.

She not only provides guidance to those with questions or who need help, said Dr. Steven Lab, chair of the department of human services, but takes it upon herself to do for them whatever is necessary.

“Whether it be budget, curriculum or hiring, I know that Carroll will have an archive of information and the mechanisms for locating it quickly anytime I need it,” said Dr. Lynne Hewitt, chair of the Department of Communication Sciences and Disorders.

All her nominators mentioned that their own jobs would be infinitely harder without her help.

Although many might be impatient or frustrated by Feasel’s workload, “I have never heard her utter a disparaging comment about anyone,” Huff said.

Feasel has a firm grasp the complex nature of the college, which consists of three departments and offers two programs in conjunction with the University of Toledo. She is able to help faculty stay in compliance with the myriad state and federal grant policies and guidelines, which was very helpful in the departments and universities’ making it successfully through the accreditation process, Orel noted.

She takes great initiative in her work, which Huff said has been extremely supportive, and, as the college budget director has saved the college thousands of dollars by her careful assessments. She is responsible for managing the $3 million college budget, the $1.7 million operating budget, the $150,000 foundation budget and the grant budgets. During times of budget-cutting, Feasel has deftly worked out new ways of doing business in the college, streamlining operations and rearranging responsibilities across offices so as to keep things running smoothly, said Lab.

“Carroll’s knowledge of fiscal policy and her ability for budgetary planning and monitoring are critical for the college’s ability to provide quality programs and services to faculty, staff and students,” Orel said.

She has a good understanding of the faculty collective bargaining agreement and has become the “go-to” person for related questions.

Feasel served on two committees to recruit and hire the new dean, noted Dr. Hans Schmalzried, chair of the department of public and allied health, which required considerable time and effort. “Carroll played a very instrumental role” in the success of the process, he said.  She has also been instrumental in planning a variety of college initiatives that directly benefit faculty, staff, students and the community at large, from homecoming to commencement and continuing education to working with donors and the College Advocates Board.

“Carroll is able to maintain close working relationship with all these individuals because of her genuine sensitivity and insightfulness,” said Orel.

The list of her tasks and accomplishments is exhausting, but all her nominators referred to Feasel’s happy, kind, positive, confidence-inspiring and humorous personality, which, Hewitt said, “contribute to workplace efficiency and effectiveness” and make her, all in all, “a superlative colleague.”