Graduate students in Dr. Jolie Sheffer’s interdisciplinary American Literary Realisms class last fall drew on a rich trove of information and images that deepened their understanding of the pivotal historical time period they were studying, 1880-1940.

Class members also left a legacy of their research for other scholars and the public with digital galleries they curated, using material culled from the University Libraries, Center for Archival Collections, Browne Popular Culture Library, the Music Library and Sound Recordings Archives, and Government Documents.

“We are curating materials that haven’t been generally available before to people with no background in ethnic or literary studies,” said Alexandra McCollum, who graduated in December with a master’s degree in German. “In addition to the descriptions we’re writing to contextualize the images, we’re also providing a bibliography and suggested reading list.”

The overall topic of the student galleries is “Constructing Race in America,” from which students chose specific areas to research. Some of the topics selected by the class involve popular representations of Native Americans, Asian Americans, and African Americans.

“The digital galleries are a supplement to the coursework,” Sheffer explained, “and the audience for them is different than for the academic essays the students write for me that contextualize the images. They also write brief descriptions for the images in their galleries, and all require critical thinking and clear writing.

“By drawing from separate stores of knowledge, they create a historical record that is greater than the sum of its parts.” 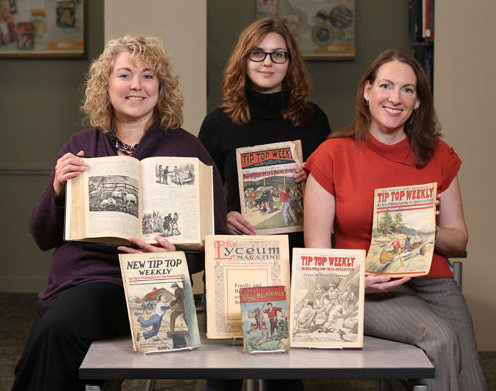 Showing some of the materials students used in their digital galleries are (left to right) Stefanie Hunker, Alexandra McCollum and Jolie Sheffer.

Because some of the pieces are old and fragile, many of the collections are closed to the public, but thanks to the class project, more are now available digitally, said Stefanie Hunker, digital resources librarian. “It’s a benefit to us to bring attention to some of our little-known and little-used collections. Students often aren’t aware of what we have that’s not digitized, but there’s a wealth of interesting materials hiding in our collections.”

Sheffer, who teaches in both English and American culture studies, also had students in the class from a variety of other departments, including theater, German and popular culture. The students worked both individually and in groups, and received generous assistance from faculty and staff from a number of areas, Sheffer said.

“The librarians have really thrown open the doors and given us so much support,” Sheffer said. “They’ve worked with the students to help develop topics and identify subjects and in some cases have scanned materials for the galleries,” which are now available on the libraries' digital gallery site.

“It’s a very unified project,” said Kevin Calcamp, a second-year Ph.D. student in theater whose study of the “cakewalk” is part of the group project on the construction of blackness in representations during the era. Using illustrated sheet music covers (including two published in this region), he depicted the evolution of the cakewalk from a mockery by slaves of plantation owners’ dance parties to a competitive component of racist minstrel shows.

“Even though there might be several ‘authors’ of a gallery, there has to be cohesion in our research and it all has to flow and sound like one voice,” Calcamp said. “Plus historically we have to show the progression. We have a theme but then subpages, such as spectacle and performance, and law and government, that all have to flow seamlessly. That’s been a challenge, but working with people from different disciplines has been a joy.”

McCollum was part of a group studying visual representations of Asian immigrants in such materials as advertising trade cards and “nickel weeklies” popular fiction.

“I’ve been surprised by some of what I’ve found,” she said. Comparing materials representing Asian Americans, she discovered a difference in the way they were depicted depending on whether they were the protagonist of the story, as in the case of detective Charlie Chan, who is shown wearing Western-style clothes and with more Caucasian features, or a secondary or evil character, in which case their Asiatic features are exaggerated. Likewise, an advertisement for laundry starch contrasts a white American woman in a modern home with a Chinese man doing laundry by hand, McCollum noted.

The American Literary Realisms class covers a time that saw the birth of a new literary form with authors from Mark Twain to Henry James and Edith Wharton, and the birth of new social sciences such as psychology, sociology, anthropology and journalism. The photography of people like social reformer Jacob Riis visually exposed the lives of the poor, and Jane Addams also advocated for the poor and for women’s rights. There were World’s Fairs in 1893 and 1904 that showcased the variety of human existence, and a new interest in folklore.

“The notion of realism shaped other disciplines as well,” Sheffer said. “The desire to know and study the reality of human, cultural and individual experience suffuses every aspect of American culture of the period.”

To conduct their historical and secondary research, students had to learn to use the artifacts to determine whether their theses were valid. “In archival research, the archive has to talk to you,” Sheffer said. “It can teach you to shift your thinking and ask different questions if what you are finding does not support your premise.”

In doing this cutting-edge digital humanities work, Sheffer said, “the students are also gaining a usable set of skills that will help them in the future,” and, Boff added, “something tangible that they can include on their resumes.”

McCollum said she appreciated having a new avenue for research. “Anything that’s a new way of seeking out new information and contextualizing it will be useful in a number of environments,” she predicted.

Colleen Boff, associate dean of University Libraries, provided the overall project management for the galleries portion of the class, and Hunker took the lead in working with several other librarians to set up a “libguide” for the students, with links to the various collections and the Omeka software used to create the digital galleries. She also worked most closely with the students.

“Stefanie Hunker was incredibly helpful in pointing me to materials I didn’t know existed,” McCollum said.

Dave Widmer, a Web applications developer with the libraries, was crucial to helping participants learn to use Omeka.

Susannah Cleveland, chair of archival collections and branches and head of the Music Library and Sound Recordings Archives, helped students find additional material and locate items such as illustrated sheet music. Carol Singer in the Department of Library Teaching and Learning and a Government Documents expert helped with a project on changes in Census language related to racial categories. Samantha Ashby of the Center for Archival Collections has contributed her expertise.

“This project is a true collaboration in that nobody has ownership of it,” Sheffer said.

“The project is very labor-intensive but it’s exactly what we should be doing and it’s the future of libraries,” Boff said.