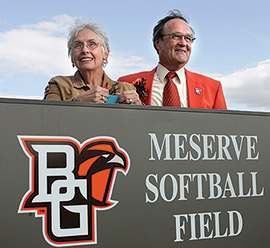 BGSU's 18 intercollegiate sports are blessed with some of the world's most supportive and enthusiastic fans. Even so, Lee and Marge Meserve have stood out for their faithful - some would say extraordinary - attendance across multiple Falcon sports for the past several decades.

That "sheer attendance" alone would make the Meserves a favorite among student-athletes, coaches and administrators. But, add to that Lee's 40 years as a professor of biological sciences and his 16 years of dedicated service as the Faculty Athletics Representative, helping to bridge the too-often-disconnected worlds of academics and athletics. Add their status as inaugural Champions Circle donors, annually contributing the equivalent of one year's tuition and fees to help an individual student-athlete year after year. Combine that with their endowing the Meserve Scholarship, given to the senior male and female student-athletes of the year.

The list goes on, but as it turns out, the Meserves were just getting started. The next chapter of the couple's dedication and incredible generosity was announced at the Stroh Center just before the women's basketball team played (and handily defeated) the Akron Zips on Wednesday, Feb. 20. The newest, historic gift from the Meserves is valued at more than $650,000. Coupled with a planned deferred gift to endow a biological sciences professorship, the overall impact will be nearly $1 million, making it one of the largest from a faculty member in BGSU's history.

"The students have been great, the colleagues have been great, and the support of the two of us has been great. Since each of us is an only child, we appreciate the sense of family that we have received," Meserve continued. "We are more than honored to be able to give back to our family."

"We often hear how BGSU impacts the lives of students," Director of Athletics Greg Christopher said. "Marge and Lee personify BGSU, and their relationship with our students has impacted thousands. Their gift today is an amazing gesture and will insure that future generations of student-athletes benefit from the BGSU experience."

The Meserve's gift impacts BGSU athletics in several ways. Current and future Falcons will benefit from scholarships being established with their gift. The Meserve Women's Athletics Scholarship and the Janna Blais Scholarship will support deserving student-athletes for years to come. Notably, the former is aimed at "walk-ons" who compete through love of their respective sports without traditional athletic scholarship support.

"Their gift today is an amazing gesture and will insure that future generations of student-athletes benefit from the BGSU experience."In addition, the couple has decided to provide the resources needed to install lights at Meserve Softball Field, with construction set to begin in the spring. They also intend to continue their support of individual student-athletes through the Champions Circle program for the next 20 years. Finally, it was announced that a biological sciences professorship in Lee Meserve's name will recognize his dedication to teaching and allow former students of the long-time educator to honor him through their gifts.

Lee Meserve began his teaching career at BGSU in 1973 after receiving his Ph.D. in zoology from Rutgers University and working at Vassar College. During his time in Northwest Ohio, he has served as an assistant professor, associate professor, professor and distinguished teaching professor of biological sciences.

He holds membership in numerous honor societies including Omicron Delta Kappa and Sigma Phi Omega. In 1990, he was the recipient of the Hollis A. Moore University Service Award. Two years later, he was honored with the BGSU Master Teacher Award. Dr. Meserve was also the recipient of the BGSU Distinguished Teaching Professorship in 1993, received the BGSU Honorary Alumnus Award in 1997 and was given the BGSU President's Advising Award in 2001.

Marge Meserve retired five years ago after a career of over 30 years as a medical technologist at Wood County Hospital, where she was supervisor of the blood bank. Besides BGSU athletics, she is currently deeply involved in gardening and is an enamel-on-copper artist. She has been involved in the Black Swamp Arts Festival in Bowling Green for each of the 20 years since its inception.