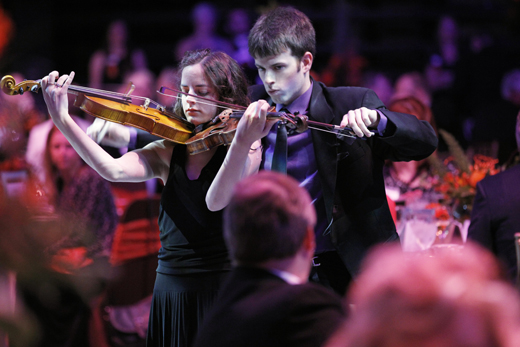 BOWLING GREEN, O.—Music is the connection that brought Sally Williams and Mark Minnich together, and it is music that is at the heart of their relationship.

They will become Falcon Flames when they marry this summer before heading to Penn State University. Minnich plans to work on a master’s degree in violin performance and Williams will pursue a master’s of education.

Their initial encounter did not lead to true love. In fact, Williams recalls, she thought Minnich was “somewhat socially awkward.” They met again at a strings camp between her freshman and sophomore years at BGSU and before his freshman year.

Eventually, in the small, tight-knit community of the College of Musical Arts, where both were students of BGSU professor Vasile Beluska, they became friends and then became inseparable in their love of music and one another.

In 2008, they joined musical forces to create Revamped, playing at concerts, events, receptions and weddings. Their performances go beyond a traditional musical duet. Together they bridge the gap between the precision of classical violin and the energy of popular music by incorporating tricks and techniques that mesmerize their audiences.

As part of their classical music performances they may improvise by adding an interlude of music from “Star Wars” or “Mario.” Often Minnich will hand his violin to Williams and she gives him her bow. They play the instruments together, with her creating the pitch and him doing the bowing. Their passion for music and one another is visible during their concerts.

“We also would like to continue our duo professionally, as well as performing in other ensembles together. As much as possible, we’d like to not distinguish what we do for fun and what we do to pay the bills,” Minnich said.

See them perform during the recent BGSU Leadership Gala at http://www.youtube.com/watch?v=CHUvPOzEWUY&feature=youtu.be.