A Guy, a Girl and a Guitar 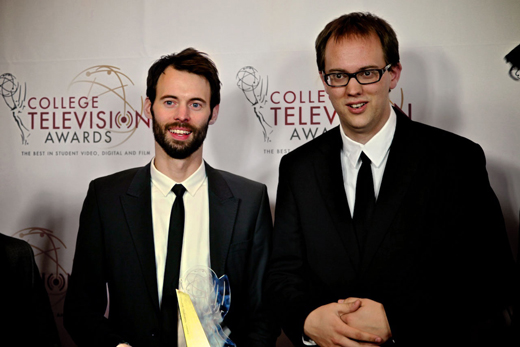 Justin Edwards (left) and Michael EdwardsBOWLING GREEN, O.—They’re Bowling Green State University alumni, brothers and award-winners. Earlier this year, Justin and Michael Edwards received a prestigious College Television Award for Best Use of Music in a Film.  The award is presented by the Academy of Television Arts and Sciences.

“Come Back to Me" tells the story of a young man who seeks to win back the love of his life by learning the guitar and singing his way back into her heart. Justin served as screenwriter and producer and Michael composed the musical score and was a song collaborator.

“Our ‘use of music’ was up against every student film in the nation,” explained Justin. “This would include all the heavily endowed schools like USC or UC-Berkeley where they have separate film scoring master’s programs that churn out dozens of students to score all their thesis films. But the award went to two self-taught midwestern brothers who got their master’s degrees in learning design from the College of Technology at BGSU.”

Justin produced the film as part of the requirements for his Master of Fine Arts from the American Film Institute (AFI), which he received in 2011.

Michael, who is currently a senior instructional designer for the University of Colorado-Denver, participated from a distance.

“Justin had written the script, and had at hand a couple of song demos he had recorded for it, just to help pitch the film,” Michael said. “When we found out we got ‘green lit’ at AFI, he brought me on board to complete the score and produce it for the film."

Michael took several courses in musical recording from BGSU’s College of Musical Arts during his undergraduate program, though he received his bachelor's degree in math and physics. The brothers credit the nurture and encouragement they received from their College of Technology faculty mentors for preparing them for their success.

Justin and Michael are the sons of Dr. Bruce Edwards, who is a professor of English and Africana studies and associate vice president for academic technology and e-learning services, at BGSU.