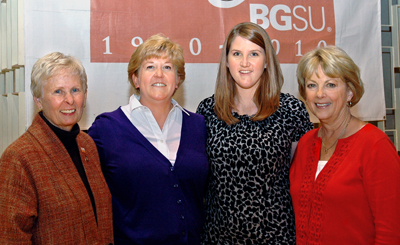 Together at an Oct. 2 Athletics reunion were (left to right) Janet Parks, Addie Muti, Jennifer Joseph and Ann Bowers.

BOWLING GREEN, O.—Long before women’s sports were governed by the NCAA, long before Title IX changed the face of school athletics, women at Bowling Green State University were energetically and enthusiastically participating in sports, from basketball and swimming to field hockey and fencing.

Readers will find the names and backgrounds of such BGSU luminaries as Gertrude Eppler and Dorothy Luedtke, after whom facilities are named, as well as many others who have gone unremembered for too long. Pulling the information together took the efforts of numerous contributors, said Parks and Bowers. They credit Muti’s master’s thesis, “A History of Women’s Sport at Bowling Green State University: 1910-1972,” for laying the groundwork for much of the book.

Designed by Bowling Green native, Jennifer Joseph, “Forward Falcons” is filled with photos and copies of newspaper clippings, bringing to life the lively women’s sports scene at the University that thrived despite a lack of significant institutional support.

While those who grew up in the post-Title IX era tend to view women’s athletics in relation to men’s, this was not the case originally, Parks said; the book provides a new perspective as seen through the eyes of those who coached and played. “Forward Falcons” tells the story of a time when women’s sports were largely administered and coached by women, and sports were more closely tied to academic programs than to the reputation of the institution. In fact, the first women’s basketball teams at BGSU, formed in 1918,were outgrowths of two literary societies: the Wilsonians and the Emersons. The book also sets BGSU’s story in a larger context, providing a concise national history of women’s sports. “We were nationally known and considered very progressive,” Bowers noted.

“Forward Falcons” documents the era from 1914 through 1982, the year that BGSU’s women’s program fully joined the NCAA and more thorough records began to be kept. “There were times when women’s sports, though very active, weren’t considered very important and weren’t covered,” Bowers said.

Another challenge of reconstructing that history was that a huge number of documents were destroyed in a flood under the bleachers of Doyt Perry Stadium following the merger of men’s and women’s varsity intercollegiate sports programs. The authors had to rely largely on the memories and scrapbooks of coaches and athletes as well as accounts in The Key and articles in news outlets. Honors student Jackie Giammara in 2009 provided significant help by conducting a survey of former athletes and coaches. A website has been created for further sharing of memories and information, at http://www.wix.com/jjosephdesigns/forward-falcons.

To order the book or CD, visit http://lulu.com or http://www.wix.com/jjosephdesigns/forward-falcons.