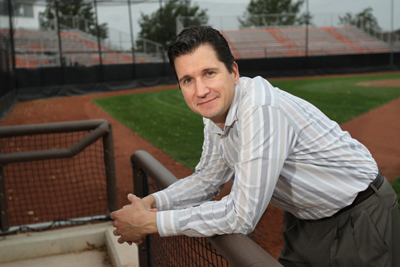 BOWLING GREEN, O.—Long considered America’s “national pastime,” baseball can also be used to define the country’s identity post-9/11 and during the ongoing War on Terror. That’s the focus of a new book by Dr. Michael Butterworth of Bowling Green State University. “Baseball and the Rhetorics of Purity” was published last month by the University of Alabama Press.

“It’s a project that goes back to when I started my doctoral studies in 2002,” explained Butterworth, an assistant professor of communication. “As a lifelong baseball fan I paid attention to the game no matter what, but like any other American I was riveted by what happened on Sept. 11, 2001. I found myself watching what happened with baseball when it resumed play six days later. The initial response I thought was compelling and it made sense. Baseball brought people together and served a healing function; it’s the best part of what sports can do. But the following summer I was struck by how quickly the response in the nation had changed from a come-together message to a belligerent, ‘let’s go get them’ message – ‘you’re with us or against us.’”

Butterworth says in-game ceremonies that initially honored those who lost their lives quickly turned to celebrating the military and the ongoing war efforts in the Middle East. “Baseball and sports in general, because of the mythology and identity as America’s pastime, became a symbolic place for Americans to come together and pound the drumbeat toward war.”

The book looks at steroids in baseball — the mention of it in President George W. Bush’s 2004 State of the Union address and the subsequent congressional investigations. Butterworth also explores the National Baseball Hall of Fame traveling exhibit, “Baseball as America,” the return of baseball to Washington, D.C., after 9/11 and the creation of the World Baseball Classic, a move he says showed Major League Baseball’s “imperialism,” an accusation also leveled against the United States for its policy the Middle East.

“Baseball and the Rhetorics of Purity” is available on Amazon and through the University of Alabama Press.