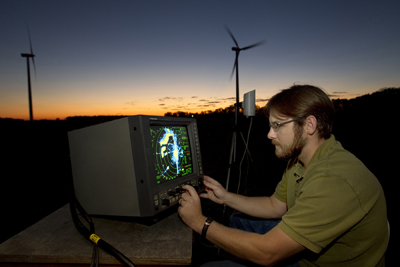 Jeremy Ross examines radar data in the shadow of the wind turbines.


BOWLING GREEN, O.—Just six miles outside Bowling Green, off Route 6, four wind turbines rise into the sky. They are the largest turbines in the state that feed into an electric grid, and the focus of a massive collaborative research project between Bowling Green State University and the University of Toledo. Faculty and students from both schools are looking at the effects of these turbines on bird and bat migration.

When the conditions are right, about 10 students and faculty members from both schools come to this location at dusk to set up thousands of dollars worth of equipment in the shadow of two turbines. The prime migrating period runs from the last two weeks of September to the first two weeks of October. According to Dr. Verner Bingman, a BGSU Distinguished Research Professor of biology, the turbines are potentially more of a challenge for nocturnal migrants.

The team from UT is affectionately referred to as “research and development,” focusing on the automated detection of birds and bats using radar, thermal imagery and microphones that capture flight-call vocalizations to determine the types of birds in the area. BGSU’s emphasis is developing software within the context of automated detection, plus field deployment of the technology with the ultimate goal of creating a database of what these fliers are doing.

“We’ve been working for about a year and a half,” said Dr. Mohsin Jamali, a professor in the UT College of Engineering. “We have grant money to go for three years, but we will look at funding to continue past that. This will be a long- term project.”

Jamali hopes to eventually have remote sensors on the turbines that will send data wirelessly back to computers in their lab. He says what their research uncovers could go beyond wind turbines and also help monitor bird strikes on planes.

The multinational group features students and faculty from India, Canada, Iran, Pakistan and Turkey. The team is typically outside for several hours, monitoring the data. Inside a white trailer, a computer monitor shows the pictures coming from the infrared camera. If you watch closely enough, you can make out the flapping of wings.

A high-powered marine radar shows the migratory track of birds, bats and even insects. A yellow dot moving in a relatively straight path across the screen indicates a bird. Jeremy Ross, a BGSU Ph.D. student in biology from Manitoba, Canada, says they are working on improving how data from the radar are being collected and stored, with hopes of field testing in the fall and full deployment during the spring migration.

While looking underneath the turbines, Bingman’s students made a surprising discovery. They found dead bats that had obviously been hit by the turbines, while others were in perfect condition. “Those bats have been sent out for analysis,” noted Ross. “But it looks like a change in barometric pressure around the turbines caused their lungs to collapse, while birds are better equipped to handle pressure changes.”

Bingman says Ohio’s legislators are excited about the prospect of putting wind turbines just offshore in Lake Erie, but there are many environmental factors to consider. “We can’t just throw them up,” Bingman explained. “We’re in a major migrating area and it’s a big concern, especially in the western basin of Lake Erie. We need to know if these turbines are any more dangerous to birds than a new building going up in downtown Toledo.”

“Pre- and post-construction assessments of these turbines are necessary,” said Ross. “On a night with a high bird migration, these turbines could be turned off. We also need to look at ways to encourage birds and bats to avoid the turbines.”