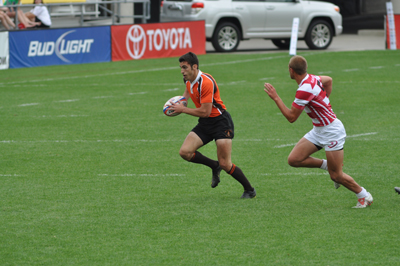 BGSU wing Rocco Mauer takes off down the sideline against Indiana

BOWLING GREEN, O.—Bowling Green State University’s rugby team proved they are one of the best in the country. On June 6, the team won the consolation round of the National Collegiate Sevens Rugby Tournament in Columbus, beating Arizona State 32-12 in front of a national television audience. The win put them in third place for the tournament.

The Falcons began competition with a win on June 4, beating Penn State 22-12. Injuries to key players on June 5 proved to be too much for the team in losses to Ohio State and eventual tournament champion Utah.

The Penn State victory was enough to put BGSU in the consolation round. The team started June 6 by edging Army 15-12 and crushing Indiana 27-0 in the semi-final. In the consolation final, the Falcons held a slim lead against Arizona State and then broke the game open, scoring 25 unanswered points.

Senior wing Rocco Mauer of Parma was the tournament’s leading scorer and was voted most valuable player.