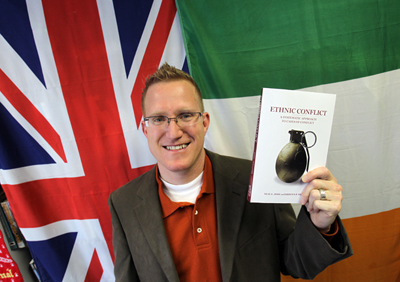 “This book is unique for two reasons,” Jesse explained. “First, its approach. The use of the ‘levels of analysis’ framework to look at the international, domestic and individual level sources of ethnic conflict brings together a great deal of literature that was not previously speaking to each other. Second, the comprehensiveness of the case studies. Most previous studies have only looked at one country or alternately taken a multinational approach that didn’t really explain any particular case. We do both at the same time.”

This is the first time a book has merged the two disciplines. Jesse felt the lapse was due to the wide scope of the topic, which requires an expert in each subfield.

“Kristen is steeped in international relations theories and knows a great deal about constructivism, gendered nationalism and political psychology,” he said. “On the other hand, I study institutions, domestic level sources of conflict and political parties. Finding the perfect mix of two scholars who each bring complementary parts to the project was key for us.”

Jesse and Williams worked on their doctorates at the same time at UCLA, but were studying very different topics. At a conference a few years later they realized they were both working on ethnic conflict. One article and another book later, the pair produced their second book, Ethnic Conflict.

It is available at a number of online book retailers and directly from the publisher, CQ Press.