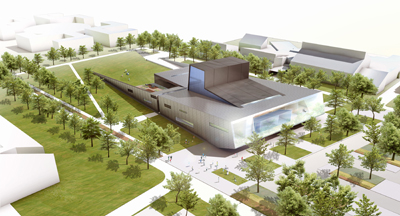 Wolfe Center for the Arts

BOWLING GREEN, O.—The new building is taking shape, and architectural circles are starting to notice. Bowling Green State University’s Wolfe Center for the Arts has been named the second most notable new performing arts facility in North America in the Winter 2009 edition of Architype Review, an architecture publication that recognizes innovative design.

The review listed the Wolfe Center, designed by Snøhetta, just behind the Dee and Charles Wyly Theatre in Dallas, by Rem Koolhaas (of REX OMA), and ahead of Alice Tully Hall at Lincoln Center, by Diller Scofidio Renfro.

Said Architype of the building, “. . . Bowling Green State University moved to create a provocative new collaborative art school that would redefine the art studies program at the school.

“The Wolfe Center has at its very core a unique program that unites a diverse range of art studies into a socially enterprising facility meant to encourage lively interaction among students and faculty alike.”

Architype Review also listed Snøhetta in the international category for its Oslo Opera House design. Other commissions of the firm include the new library on the site of the ancient library in Alexandria, Egypt, and a memorial on the World Trade Center site.

To put the Wolfe accolade in context, says architect Dr. Katerina Rüedi Ray, director of the School of Art, “Rem Koolhaas is a household name among architects, who along with Frank Gehry is considered the top architect in the world at present. Diller Scofidio Renfro is, as an architectural firm, as—if not more—important as Snøhetta is for the Norwegian opera house, and thus their ‘company’ is central to the recognition the Wolfe Center is already beginning to receive.”

At the opening of a Snøhetta exhibition in New York last month, the Norwegian ambassador was heard saying about the Wolfe Center: “That is a very good Snøhetta building. Where is Bowling Green? There must be good people there.”