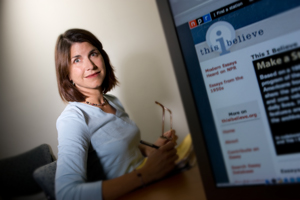 BOWLING GREEN, O.—Three years ago, Amy Rybak was driving to work at Bowling Green State University early in the fall semester when she heard someone reading what sounded like a student-written essay on National Public Radio.

Thinking it seemed like something she would want her students in BGSU’s General Studies Writing Program to do, the excited instructor went to her East Hall office and looked up “This I Believe,” the NPR program airing the essay.

The series invites people—some famous, most not—to share personal philosophies and core values that guide their daily lives. Rybak immediately decided to try the idea with a class, whose reaction she likened to “light bulbs coming on.” The students wrote down ideas and, “in 50 minutes, they were all able to write this essay,” which was new, different and, perhaps most significantly, something they enjoyed, she said.

After two years of tweaking, Rybak had all of her English 111 students submit “This I Believe” essays to NPR last spring. Seven of the essays were posted on NPR’s Web site, along with others written by students of Dawn Hubbell-Staeble, a lecturer in General Studies Writing. And this fall, Rybak is teaching one section of a pilot First-Year Seminar course and planning to use “This I Believe” as part of the capstone assignment.

Now entering her 10th year as a full-time instructor at BGSU, Rybak had always required a diagnostic essay from her students at the beginning of each semester to gauge their writing ability. Until last spring, that is, when the “This I Believe” assignment got her English 111 class off to a good start.

After multiple drafts and peer review of their papers, the students began to see that what mattered to them could also have meaning to others, Rybak noted. They were proud of their work, which ranged topic-wise from curling to suicide. In the latter case, writing about a friend’s death was cathartic for a student, she said. “Writing can heal. We know that,” she added. “Writing can be a great way to find peace.

“Some students think they’re not writers, but then they write about something they care about and things just spill out of them that no teacher could change,” she said.

She hopes the students in First-Year Seminar will be similarly motivated by “This I Believe,” the NPR version of which is based on a 1950s radio show of the same name, created and hosted by legendary journalist Edward R. Murrow.

Another of her colleagues, instructor Stacey Osborn, will teach the other two sections of First-Year Seminar, which is designed to explore transition-to-college issues while also keeping an academic focus, Rybak said.

Pointing out that students’ values can now often be seen on Facebook, she plans to have those in her class maintain a blog dealing with feelings and transition issues. “That will become a sort of pre-writing for them,” feeding into the capstone “This I Believe” essay, she explained.

“I feel like this class is who I am,” said Rybak about First-Year Seminar, an idea advanced last year by Dr. Mark Gromko, senior vice provost for academic programs.

“The This-I-Believe essay is an excellent culminating experience for the First-Year Seminar,” Gromko said. “It engages students, emphasizes academic skills, and showcases the University’s distinctive emphasis on critical thinking about values.”

The essays also give new college students “a permanent record of what they were feeling at that very important time of their lives,” in addition to helping them see writing as valuable and potentially meaningful to multiple audiences, Rybak said. Submitting work for a wider audience, she said, is “a major success for a first-year student.”

“We have tended to sell personal writing short,” she added, noting the difficulty for some new students of jumping into academic writing. “It’s a great place for my students to start.”