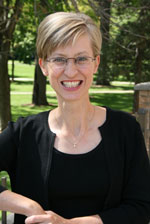 Dr. Miller is frequently interviewed by local, regional, national, and international media. She has appeared in/on CNN, ABC News, Fox News, Al Jazeera, The New York Times, The Guardian,  and The New York Review of Books, among others. In recognition of her extensive commitment to public engagement, Dr. Miller was awarded the 2018 Community Engagement Award by BGSU’s Faculty Senate.

Dr. Miller frequently collaborates with her students on research projects. Many of them have used this experience to launch their own projects for presentations at student research symposia and inclusion in job and graduate school applications.