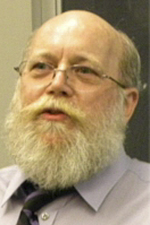 Neal L. Carothers (November 16, 1952 - January 29, 2018) was Professor and former department Chair, joining the department in 1987 and retiring from BGSU in 2011, after 24 years of faithful service to the department and university. Neal received the Ph.D. from Ohio State University in 1982. His career was characterized by a rich intellectual aesthetic, quiet professional achievement, and a deep sense of service.

Dr. Steven Seubert wrote, “It is with the greatest sadness that I have learned of the passing of Neal Carothers. I am indebted to Neal not only on a professional, but a personal level as well. He was a gifted mathematician, exceptional educator, and expositor of the highest degree. I not only learned a lot of mathematics from him (and from his book ‘Real Analysis'), but learned a lot about how to share it with others; his love of and passion for mathematics was evident and infectious and he had a profound effect on my career. No doubt this was also true for the generations of students he trained at BGSU.

He amassed the usual research credentials publishing more than a dozen refereed research articles in some of the most prestigious journals in his field and he supervised three students who earned their PhD under his tutelage. He was a popular speaker delivering over a dozen invited addresses and wrote two books.

On the administrative end, Neal served the department in all of the most important capacities, as a member of its Advisory, Personnel, and Promotion and Tenure Committees, and from 1999-2007, as its Chair and with impressive results. A hallmark of his leadership was to have nurtured strong graduate programs and fostered strong relationships with departments and programs all across campus by his presence at the college and university levels.

I am certain that one of Neal’s most cherished accomplishments would be his reputed text ‘Real Analysis’. I am including below a copy of one review for this exceptional text which compares it to several other well-known books by some of the most revered of all mathematicians of our era. When the review states that Neal’s book ‘will sit happily alongside classics such as Apostol’s Mathematical analysis, Royden’s Real analysis, Rudin’s Real and complex analysis and Hewitt and Stromberg’s Real and abstract analysis,’ it is acknowledging Neal as a supreme expositor and master of his trade.’

You will be sorely missed, my friend.”