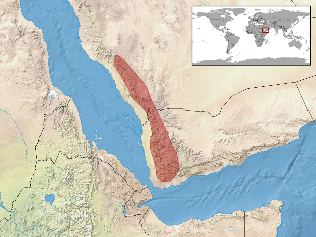 (Tail accounts for 1/2 of their body length).

Captive Care:  Arboreal cage with 1/8th inch wire mesh, minimum of 18L*18W*40H. House singly.  The cage should be high enough that the animal can climb above human eye level; real or fake plants for climbing.  Chameleons have been known to eat vegetation, so live plants may need to be replaced regularly.

Temperature:  Between 85-95˚F at the basking area of the cage during the day, and the cage may be left at room temperature at night so long as it does not go below 50˚F.

Diet:  In captivity, vegetation and insects.  Collards, mustard greens, turnip tops, dandelions, hibiscus, edible fruit and vegetables, flowers, and leaves.  Hanging leaf lettuce from a clip suspended from the top of the cage works well.  The animals will lick the water droplets from the leaf and end up eating the leaf itself.  Insects: crickets, king mealworms, wax worms, cultured roaches, silkworms, trevo worms, flightless houseflies and non-toxic wild caught insects such as moths.  Hydration is important and most veiled chameleons will not drink from standing water, so heavily mist the cage twice a day so the animals can drink the droplets off of vegetation.

Breeding:  Females should be at least 10-14 months.  Introduce the female into the cage with the male.  If she displays gravid colors (dark green with paler spots), remove her from the cage and do not breed her this month.  If she does not, allow them to mate, watching to make sure the male does not become violent.  Remove the female from the cage immediately after mating, reintroduce her later that day and several times throughout the week.  When the female is pregnant she will display dark colors and display threatening behavior toward the male.  Chameleons are capable of laying 15-70 eggs per clutch and 3-4 clutches per year.  Incubate the eggs in moist vermiculite, sand or perlite.

Notes: Chameleons have many distinct features.  They have a prehensile tail that allows them to have extra support to keep their balance in the trees.  They have zygodactyl or mitt shaped feet that allow them to grip small branches.  Males are easily detectable because unlike the female they have spurs on their hind feet.  Chameleons will develop a bony casque on top of their head as they reach adulthood.  It is believed in the wild that this collects dew at night and directs it to their mouths.  In captivity they respond best to regular misting for hydration.  Chameleons are capable of changing colors to warn or to hide from enemies and communicate with other chameleons.  The chameleon has a long sticky tongue which it can use to catch food with from far distances.  Chameleons have binocular eyes which means that they are able to swivel around 180 degrees in their sockets, allowing chameleons to see practically everything around them without moving their bodies.