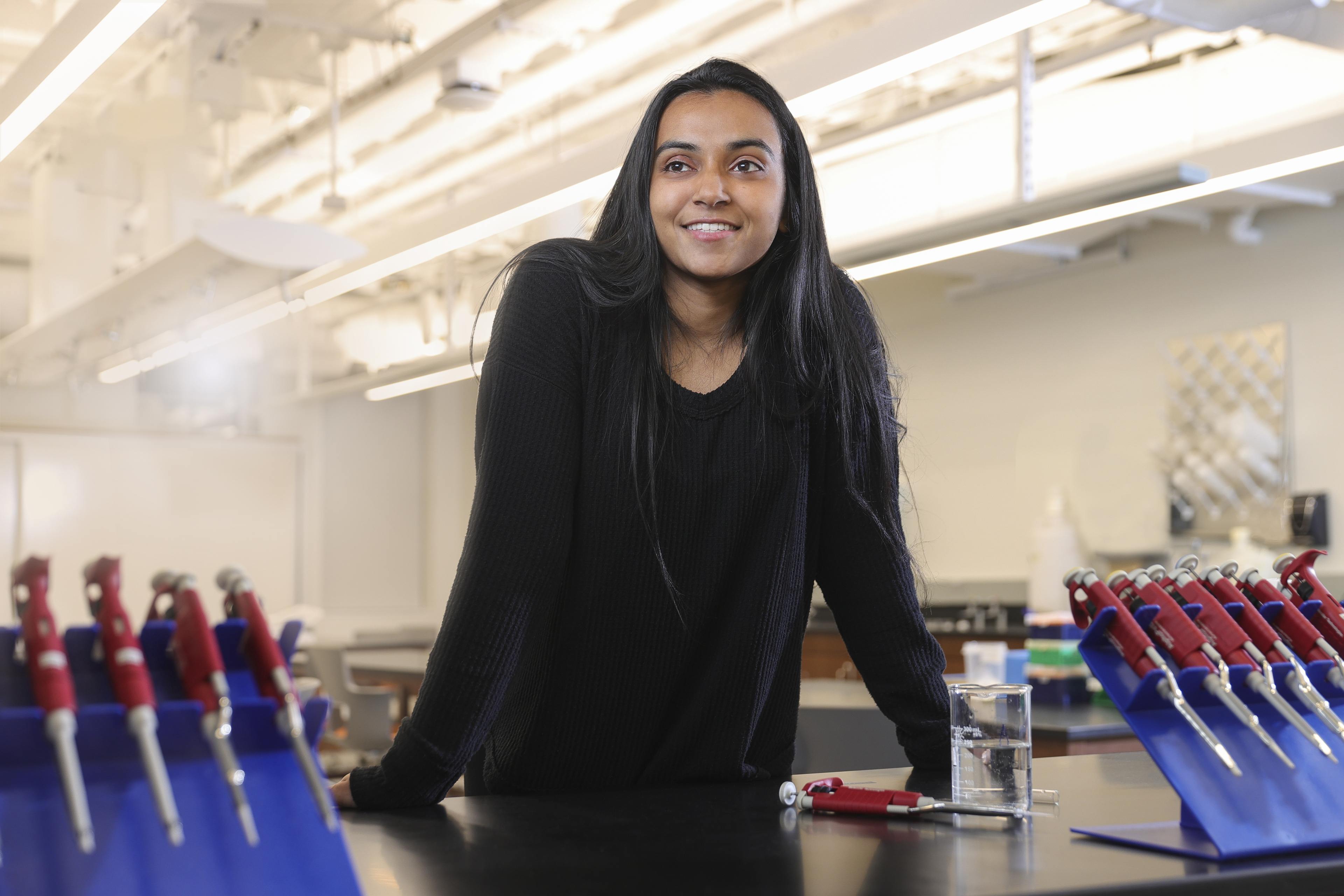 Nikhita Jacob has always excelled on the soccer field, so it’s no surprise that she’s used to competing in the classroom as well.

Jacob played on the highly successful Bowling Green State University Women's Soccer team, winning three Mid-American championships and twice qualifying for the NCAA Tournament. She served as team captain for the 2020 season, even though she was sidelined because of knee surgery.

Jacob, who graduated from Pioneer High School in Ann Arbor, Michigan, was awarded the Alumni Laureate Scholarship (ALS) upon her enrollment to BGSU. The scholarship is only given to four Honors College students per year and covers the cost of any educational expenses up to the cost of full-time in-state undergraduate tuition, for eight uninterrupted fall and spring semesters, and includes a $1,000 book award each year.

“Even though a large part of my experience at BGSU was through athletics and soccer, the ALS program is one that I hold close to my heart because it allowed me to connect with students outside of athletics that I otherwise may not have met,” said Jacob, who completed her Honors project on the importance of optometry and eye health. “This program is a group of BGSU Honors students who take part in leadership workshops, community engagement activities and alumni events.

“The scholarship is funded by specific BGSU alumni and I want to specifically thank Paul and Margo Hooker for their belief and investment in me. They are genuine caring people and have been so supportive throughout my time at BGSU.

“I am grateful for this program and the people in it because it helped me prepare for each year at BGSU and think about the goals I wanted to accomplish. From start to finish, my ALS experience was one for which I will be forever grateful.”

“Getting to work with Nikhita during her senior year as she finished her Honors work, I was able to see how diligent and dedicated she is with her work, academics, athletics and campus organizations,” said Christine Shaal, assistant director of Student Mentoring in the Honors College. “She is passionate about her professional field and educating others on the importance of being proactive about their own health. This is evident through her Honors project research and her current work with an area optometrist.” 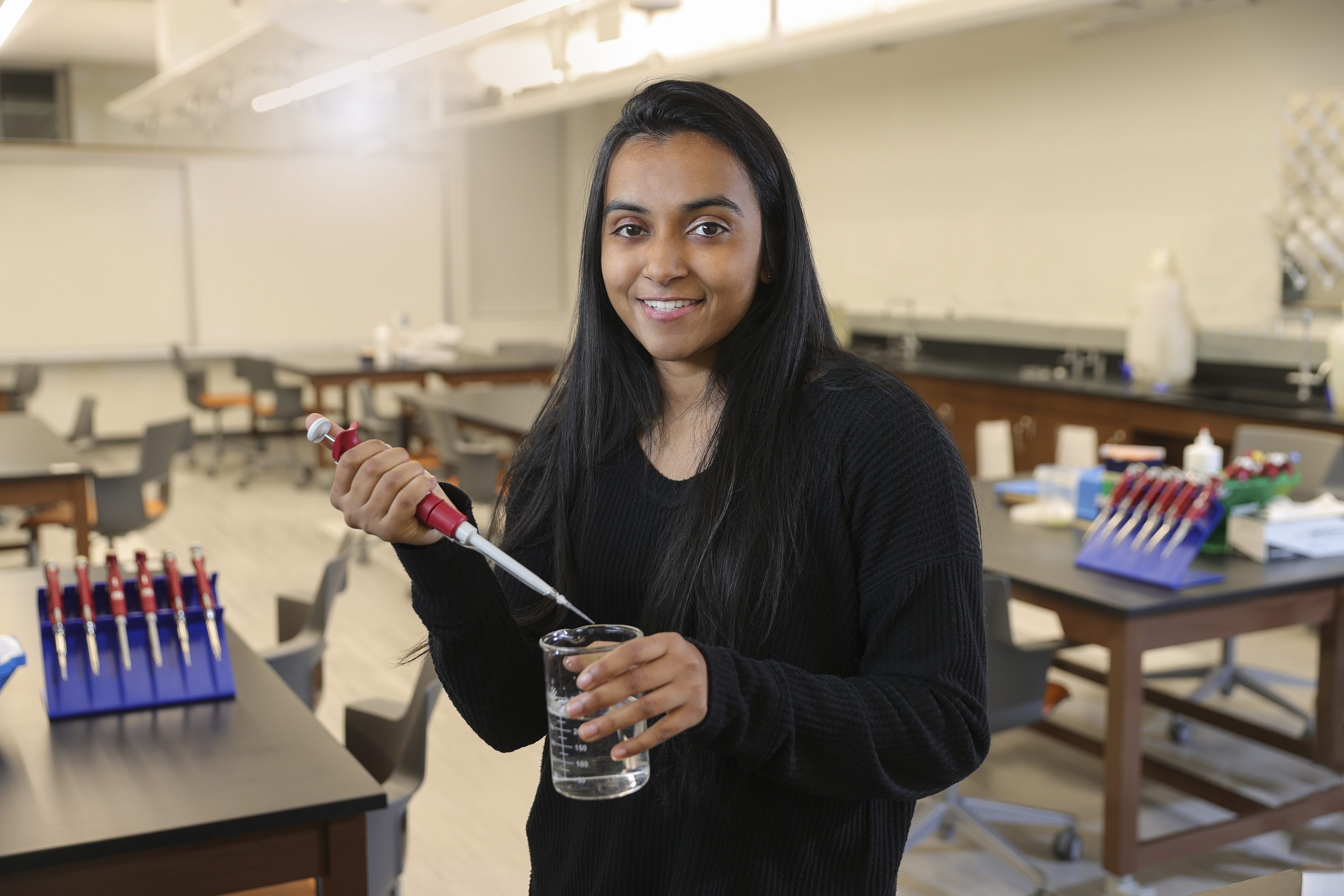 Jacob is graduating with a Bachelor of Science in Biology, and plans to attend optometry school in the Midwest and eventually become a doctor of optometry.

Now that she has completed the biology program, she will have many more opportunities when applying for jobs, especially in the health-care field.

“It can be difficult to find job opportunities without at least a bachelor’s degree,” she said. “Now that I have completed the biology program, I have a solid science background and have the ability to pursue another degree and open up more possibilities for my future.”

Jacob said the BGSU Department of Biology has an amazing faculty who are very passionate about the work they do.

“I really enjoyed my immunobiology class with Dr. Ray Larsen,” she said. “I took this class during the COVID-19 pandemic and found it very relevant and interesting as we learned about different diseases, immunity and vaccines. All my classes, especially my anatomy and physiology classes, gave me a great foundation and opened my eyes up to many different areas within biology. I particularly enjoyed Dr. Julia Halo's genetics class as she was fun and energetic and taught in a way that was hands-on and applicable. Dr. Daniel Wiegmann also had a great class focusing on population and community ecology. All my classes taken through the Department of Biology made me more cognizant of the world around me and the issues that we are currently being faced with.”

"When I was recruited to play soccer, I never would have imagined having the success that we did and that I would be on a team that would make program history," she said. "My freshman season in 2017 was the year we made it all the way to the finals of the MAC Tournament but ended up losing to Toledo. That loss fueled our fire for the next seasons.”

Even though there was a lot of success during her time on the team, from championships to making the all-freshman team and tournament MVP awards, there were also hardships.

“I had minor injuries here and there but was able to get a lot of playing time my freshman, sophomore and junior seasons,” Jacob said. “During my senior year, however, after the start of the pandemic, I had a knee injury and had to have surgery. As a captain, it was hard to make the adjustment of not being able to play and trying to motivate my teammates when I was not actually on the field.”

She had planned to rehabilitate and come back for a final season this past fall but had three retinal detachments from soccer injuries that also influenced her interest in optometry. Because of the severity of her surgeries and importance of her vision, she had to stop playing soccer completely.

“It was heartbreaking to have to give up soccer earlier than expected, but I was grateful for the time that I did have on the team,” Jacob said. “The soccer program gave me a group of motivated and hard-working young women I could trust and spend time with from Day 1 on campus. The program gave me a whole new understanding of discipline, teamwork, commitment and dedication. The ups and downs I went through with teammates, having to step out of my comfort zone and learning to push myself helped me grow as an athlete and as a person. The lessons I have learned from my time on the team will stick with me forever.” 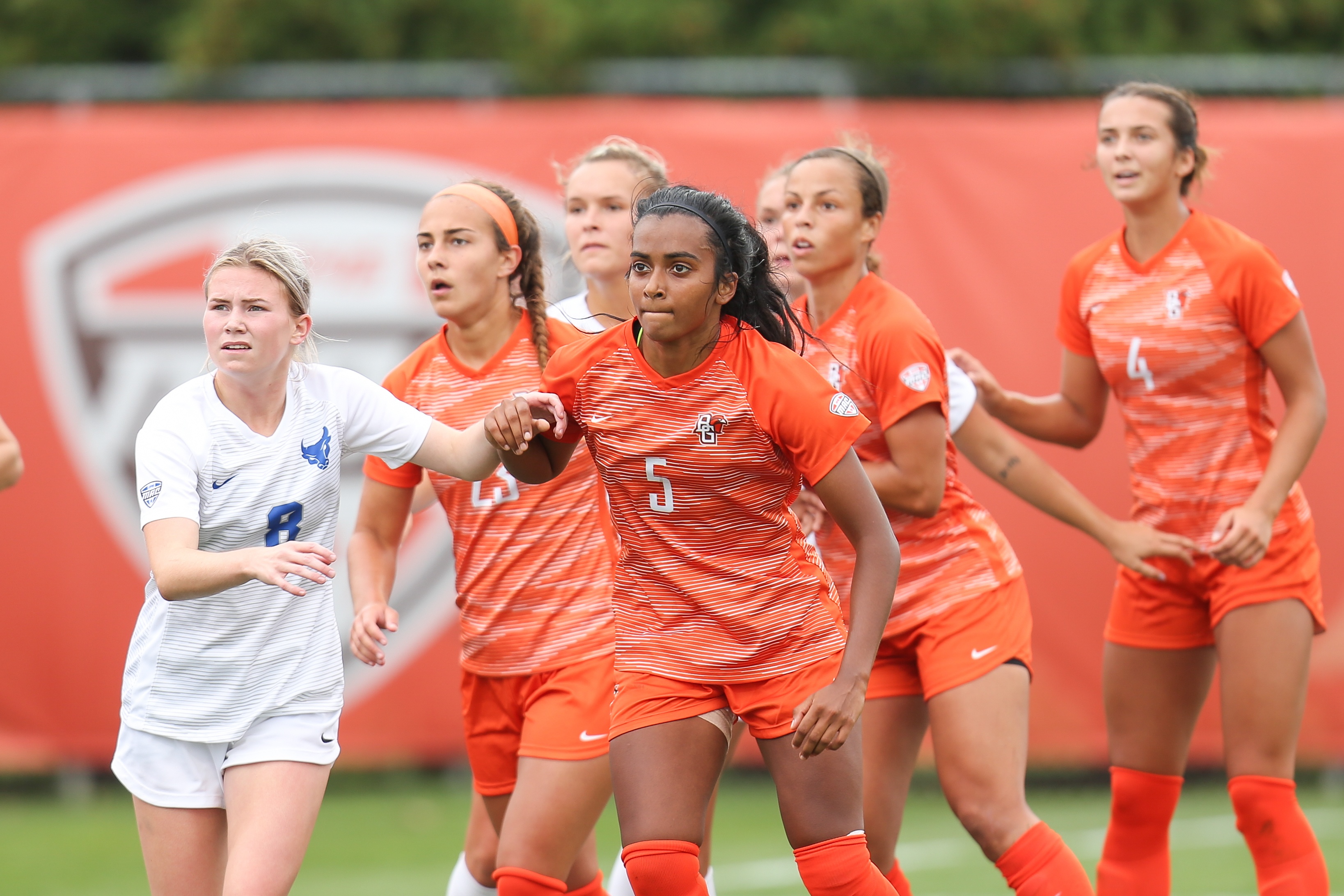 Jacob always knew she wanted to go into the medical health-care field.

During her fourth year, the Pre-Professionals Program reached out to current members about a job opportunity as an optometric technician at a local optometry clinic, Premier Vision Group.

“Besides a couple days of shadowing, I had very little optometric experience,” said Jacob, who also was a member and eventual president of the Pre-Optometry Club. “I applied for the job and I have now been working there for over one year. All the optometrists, opticians and technicians I am working with are passionate, hard workers and great people. It has been an eye-opening experience and the passion they have for patient care and optometry is contagious.

"Without the Pre-Professionals Program at BGSU I would probably still be trying to figure out what to do with my career. Now, I have no doubt that I want to go to optometry school and devote my career to preserving and protecting people’s ability to see.” 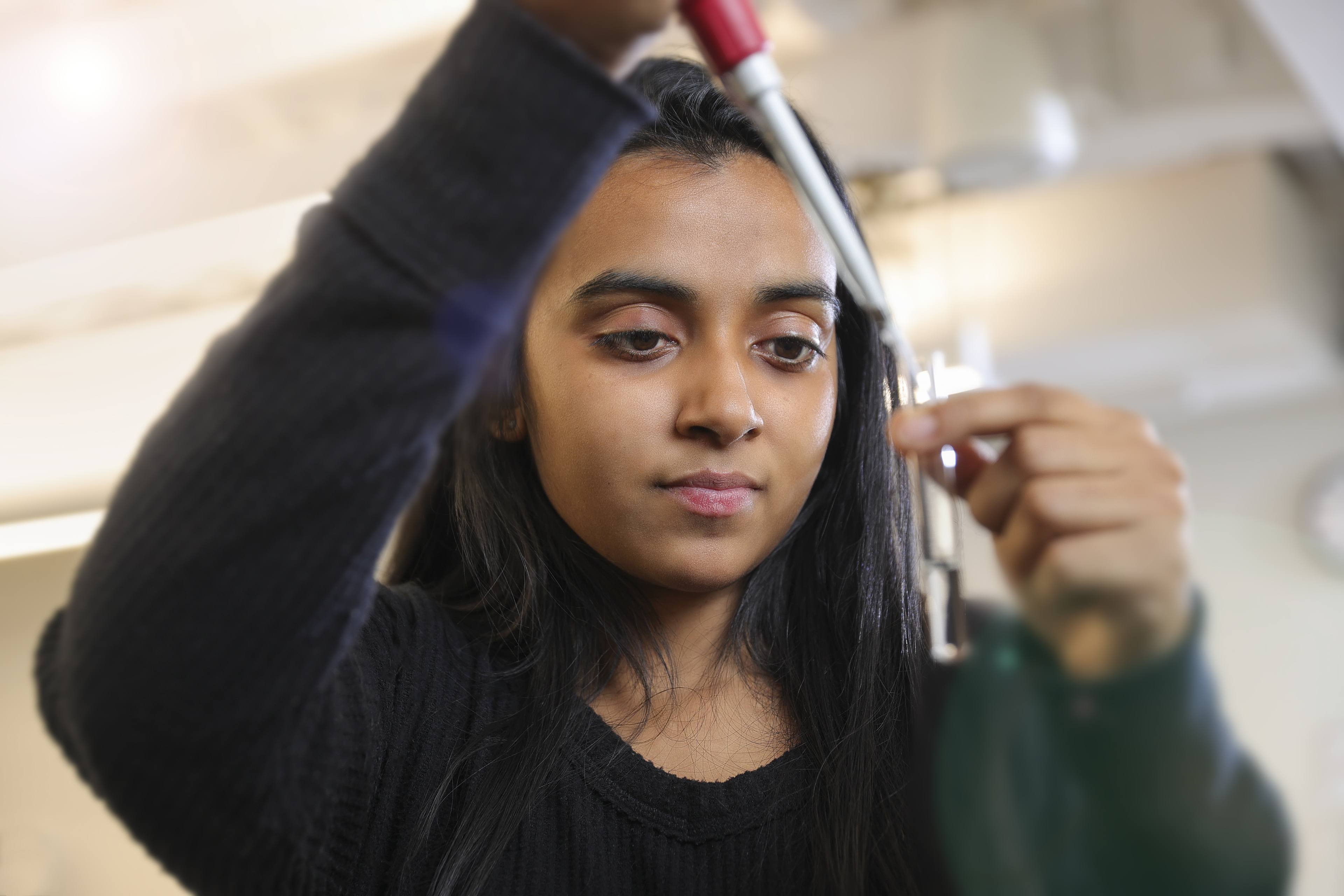 Jacob, who is leaving BGSU on a career path to create public good in the optometry field, will never forget all the life-enhancing experiences she has had.

“Little did I know, the University would eventually become my second home,” she said. “BGSU has allowed me to play my favorite sport, it has helped me figure out what I want to do with my career and, most importantly, BGSU introduced me to my best friends. I’m extremely grateful for all the opportunities BGSU has provided me and the support from older students, faculty, coaches and alumni.

“I can’t put into words how much I have enjoyed my time at BGSU, but I am so grateful for everyone at the University. I don’t think I could have asked for a better college experience.”