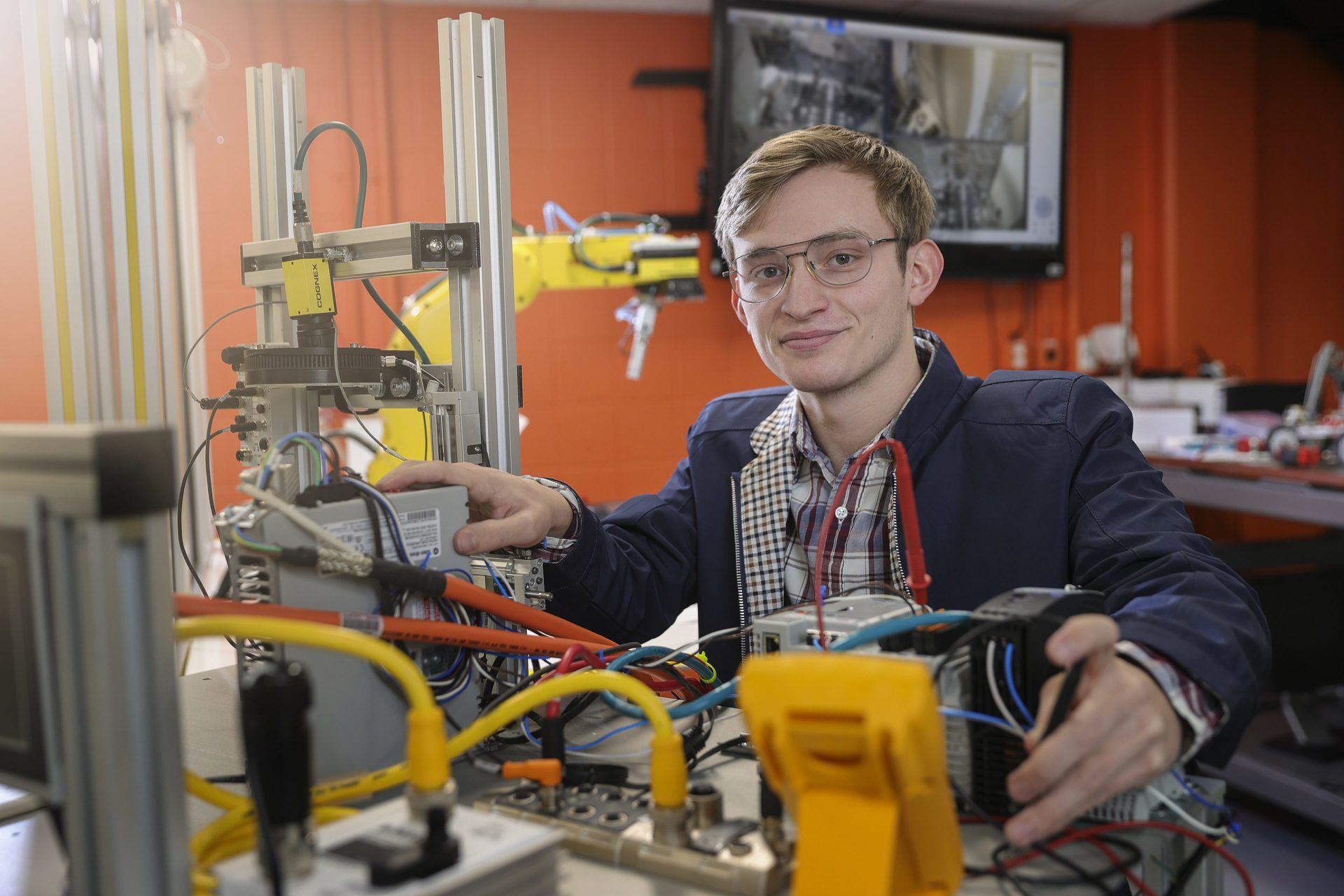 Ian Kennedy to begin career in robotics after graduating from BGSU 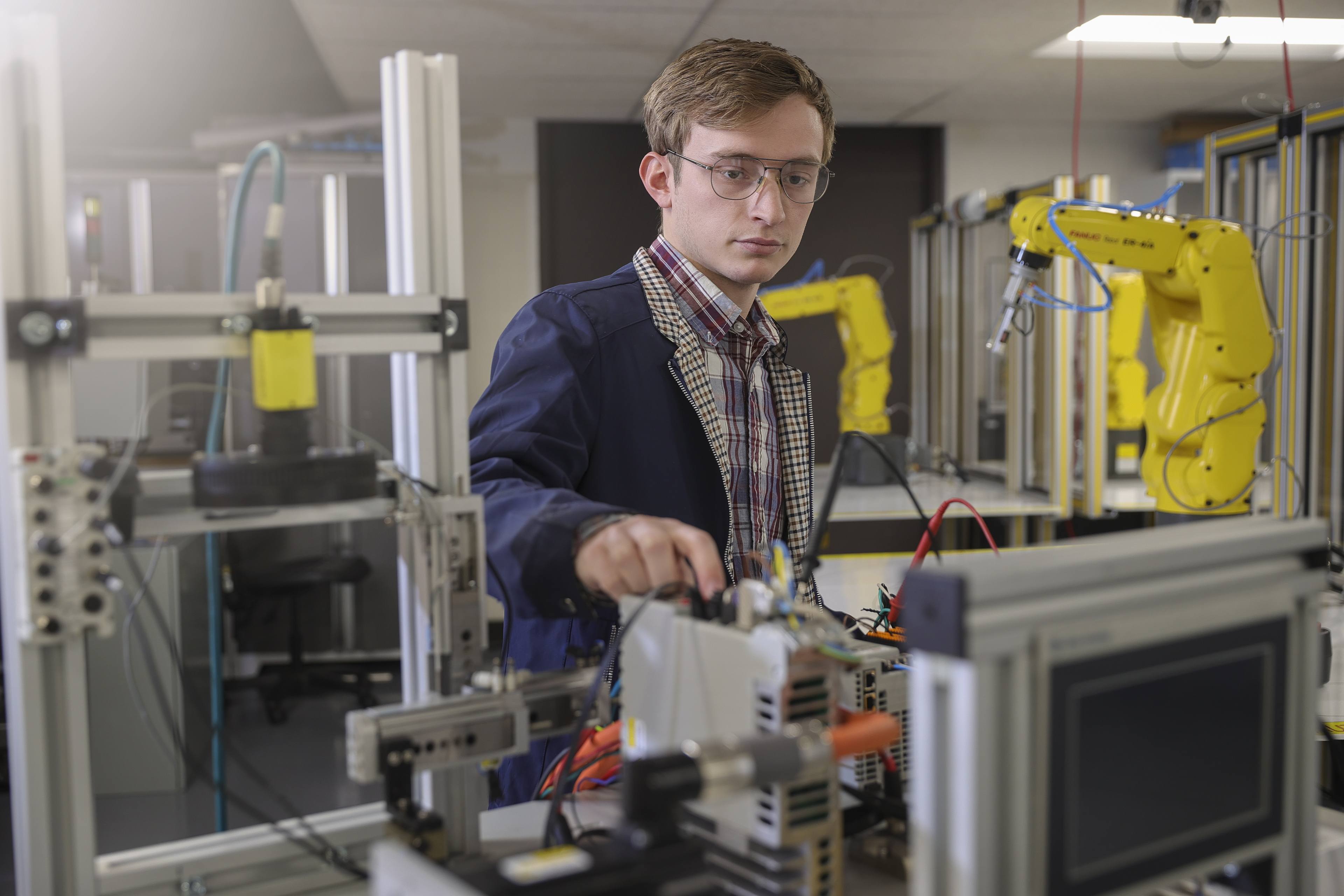 When some people picture robots, they think science fiction. When Ian Kennedy thinks about robots, he sees the future of Ohio’s industrial workforce.

The senior, who is set to graduate from Bowling Green State University this month, recently shared his thoughts on the topic of Ohio's automated workforce with the governor.

He was on “pins and needles” when he gave a robotics demonstration to Ohio Gov. Mike DeWine in the Stephen and Deborah Harris/RIXAN Robotics Laboratory earlier this fall at BGSU.

Kennedy, a senior majoring in mechatronics engineering technology in the College of Technology, Architecture and Applied Engineering (CTAAE), was chosen for the exhibit to show the governor his senior project and because of his extensive experience working with robots. 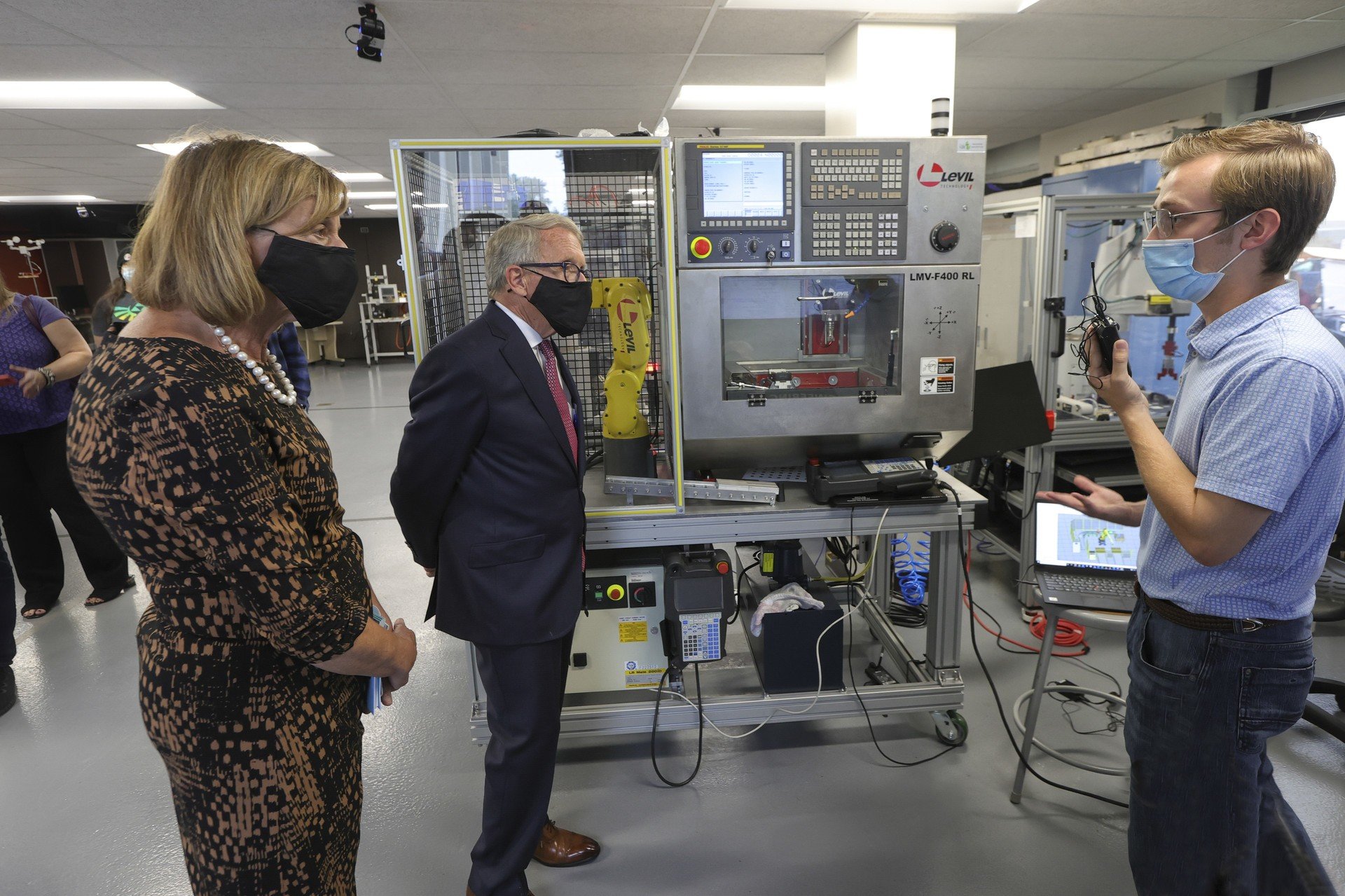 “My goal is to become a robotics engineer and master-certified in FANUC,” he said. “I thought I was well suited and well prepared, but it definitely was still nerve wracking. He asked how my classes here at Bowling Green and my work in the lab have helped me progress out in the field or on the job site.

“I actually got to talk to him a decent amount of time — I think I went a little bit over. I went on to talk about the actual manufacturing system that I was working on and how important it is that hands-on work with this type of machinery is significant because Ohio is a massively industrialized state and robotics have an ever-increasing role.”

The mechatronics engineering technology program at BGSU is an interdisciplinary field that prepares students to work with emerging technologies in robotics and advanced manufacturing. This in-demand field includes the design, development, implementation, automation and management of robotics system technologies such as industrial robotics manipulators, automated guided vehicles, navigation and inspection, assistive robotics, device technologies, human-robot interaction and many other exciting applications.

Kennedy, who attended the Millstream Career Center in Findlay City Schools, developed an interest in robotics and robot competitions while in high school. He was drawn to BGSU because the University had just unveiled its mechatronics engineering technology program and lab at the time.

“I was given a tour prior to the start of the program opening, and they had a bunch of Mitsubishi Delta SCARA robots in that lab that I really got interested in,” said Kennedy, who will graduate in December. “Plus, it was a four-year program — I really wanted the background knowledge of engineering so that when I go out into the industry, it's not just about the robot. I will understand the other components, equipment and what the robot interacts with and communicates with.”

Kennedy spent the summer as an intern with Perrysburg-based RōBEX, a precision integrator of industrial robots that designs, builds and installs custom robotic systems that improve productivity and safety through industrial, collaborative and autonomous mobile robots.

Kennedy was offered a job at RōBEX at the end of his internship and is working part-time during his final semester at BGSU. He will start working full-time after he graduates.

“It is always satisfying to have our graduates find immediate job placement in the robotics and automation industry,” said Dr. Mohammad Mayyas, professor of robotics and mechatronics engineering technology. “The mechatronics engineering program offered Ian practice on state-of-the-art, integrated manufacturing equipment during his senior capstone project. Together with his interest and extensive co-op preparation, Ian was able to grow hands-on skills while in the College. This made it easy for him to secure a job at RōBEX upon graduation.

"Today, Ian’s commitment to learning has become an example to his employer for what the workforce market needs.”

“Ian came into his internship with RōBEX with extreme confidence and a high level of composure with regard to his expectations of the position and the various requirements that would be expected of him,” Bowers said. “The educational foundation BGSU and the mechatronics engineering technology program provided truly prepared him for ultimate success in his role here. We incorporated a variety of projects that needed collaboration, expertise, clear understanding and patience to reach the goals set by the team, and Ian exceeded every expectation we set for him.”

Kennedy gave credit to the mechatronics lab at BGSU for preparing him for a career in robotics.

“After I graduate from Bowling Green, I will continue to work at RōBEX. Currently, I'm an automation engineer. My goal is to work my way up, learn robotics as much as possible, specifically FANUC and MiR applications, and then possibly become a robotics engineer.”

Bowers pointed to the importance of having the BGSU mechatronics engineering technology program in northwest Ohio.

“The ‘workforce of tomorrow’ is going to be one that is very competitive, highly skilled and extremely focused on complete understanding of a broad spectrum of efficiencies within so many industries, especially in the world of automation and advanced manufacturing facilities,” said Bowers, a BGSU alumnus. “BGSU’s mechatronics engineering technology program has risen to a very high level of excellence in the overall preparation and core competencies for the graduates who come through the program each year. RōBEX looks forward to providing unique insight and an invaluable partnership with BGSU moving forward.”

BGSU is putting students who aspire to work in the robotics field in an envious position, Kennedy said.

“Bowling Green has these types of robots that you can train on and learn about them,” he said. “You can go on and step on any industry floor here in Ohio and other states and with just a little bit of updating on how to operate their machinery. How cool is that?

“I think the whole machine shop that they have there is incredible. A lot of that is, I think, very crucial in knowing how parts and how things are created when you design or model them.”

Kennedy said the faculty in the program are great to work with, and have expertise in many areas.

“I really appreciated working with Resmi KrishnankuttyRema (assistant teaching professor in CTAAE),” he said. “She's my mentor; I’ve had her for most of my electrical classes, and I've been able to learn a lot from her.

“Dr. Mohammad Mayyas has been significant to the engineering technology program in general here at Bowling Green because I think with the industry in Ohio there are thousands and thousands of robots that are used throughout the state. With him coming in and starting this robotics program, it will pay significant dividends within the near future.”