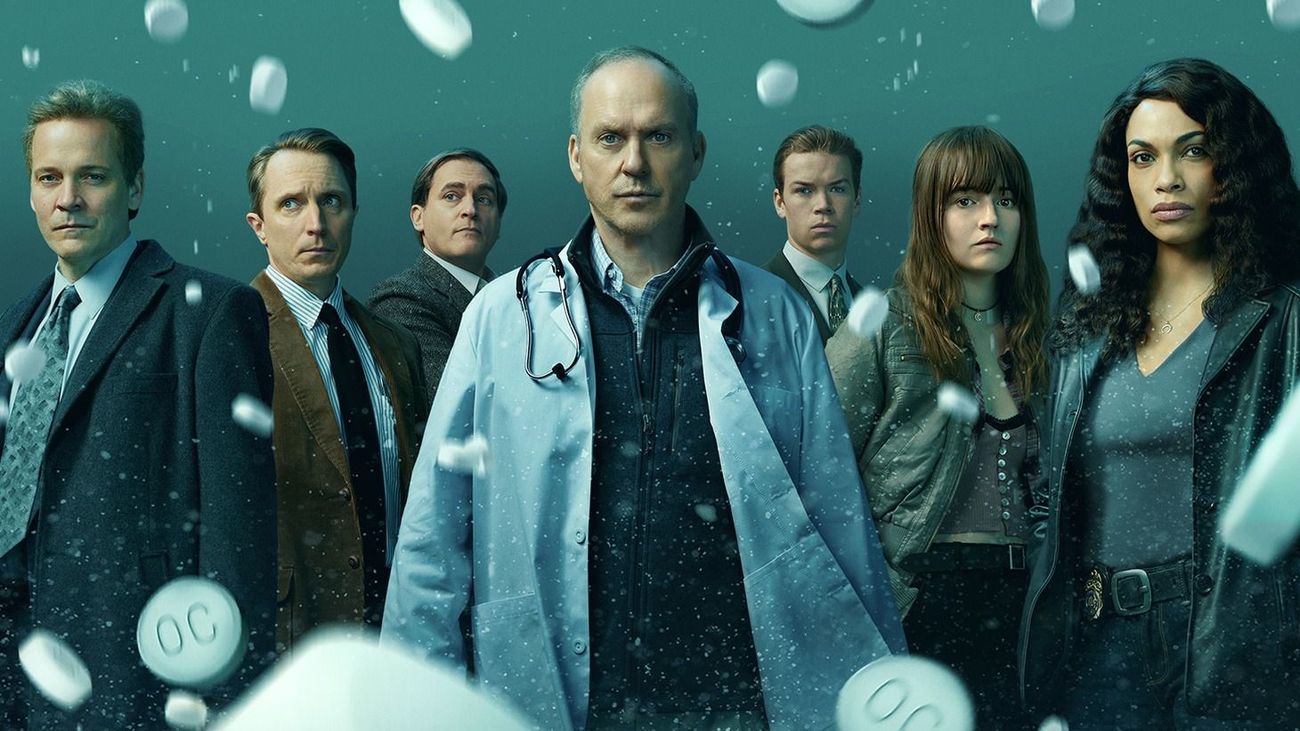 The star power of actors Michael Keaton and Rosario Dawson are meant to grab the viewers’ attention in the new streaming series “Dopesick,” which premiered on Hulu in October.

Academy Award-winner Barry Levinson even directs the first two episodes of the series that examine how one company, Purdue Pharma, triggered the worst drug epidemic in American history.

But it’s Beth Macy ’86 who laid the foundation for the eight-episode limited series, which is inspired by her New York Times-bestselling book, “DOPESICK: Dealers, Doctors, and the Drug Company That Addicted America” (Little, Brown and Co., 2018). “Dopesick” won the L.A. Times Book Prize for science and technology and was short-listed for the Kirkus Prize and the Andrew Carnegie Medal.

Macy, who also received writer and executive producer credits on the series, drew upon 30 years of reporting from southwest Virginia communities, as she did in previous books “Factory Man” and “Truevine.” 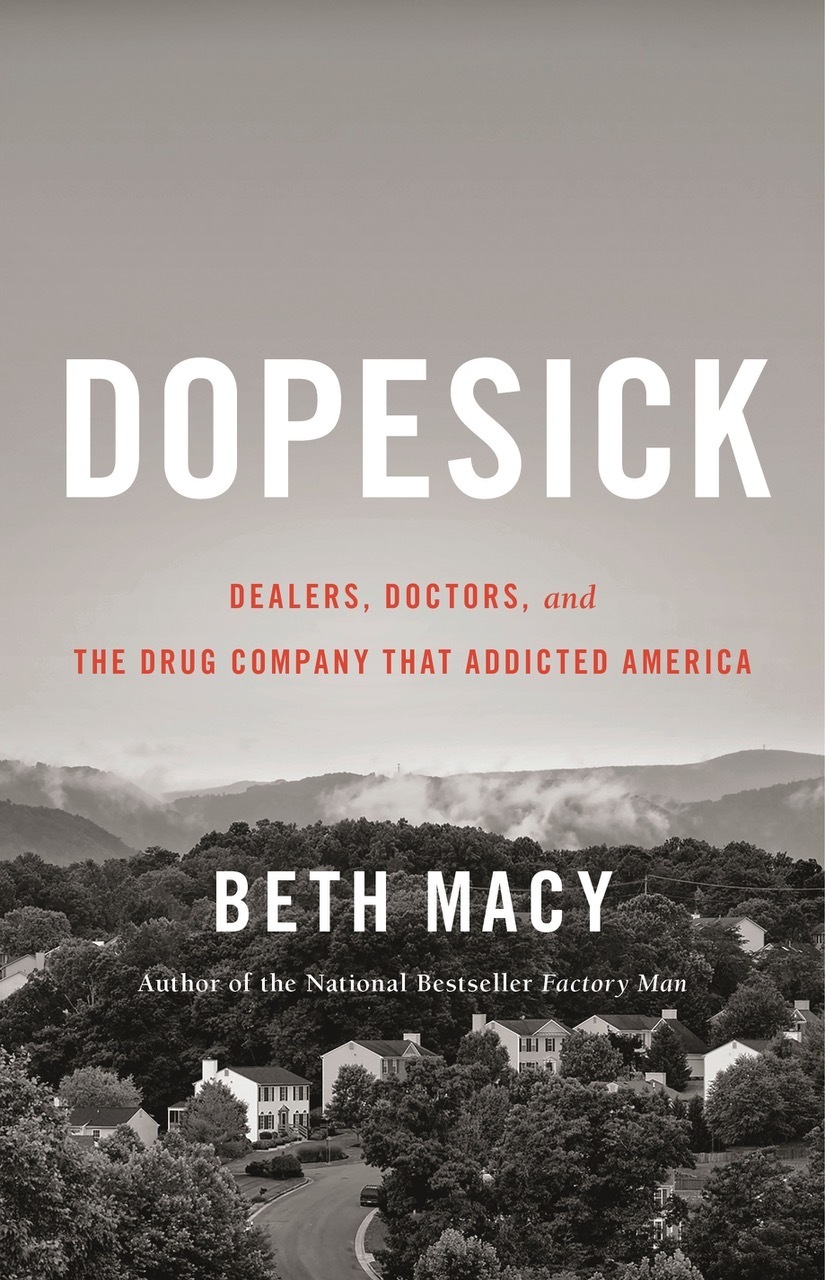 From book to Hulu series

After her book debuted in 2018, there were several offers to option “Dopesick.” Ultimately, Macy went with Warren Littlefield, who also produces “The Handmaid’s Tale” for Hulu.

“I really liked his vision for it because he saw right away that it would help chip away at the stigma of being addicted to opioids, which is still the No. 1 barrier to turning the crisis back,” she said. “Systemic stigma. Personal stigma. Community stigma. Policy stigma.

“He kept saying that more people will watch the show than read my book. He really got that it was a cause for me.”

Then, Macy was paired with show runner Danny Strong, best known for creating the Fox drama “Empire” and writing two screenplays for the “Hunger Games” franchise.

“He had another opioid project already going and our visions matched a lot,” said Macy, who earned a Bachelor of Science in journalism from BGSU in 1986. “He has a lot of experience bringing nonfiction projects to the screen, including ‘Game Change,’ ‘Recount,’ ‘The Butler.’ He wrote all of those, and he knows how to take a true story and turn it into a docuseries.

“Working with him was wonderful. We were a very good team. We did a lot of research together that went far beyond my book. We used other books and we did interviews as people leaked us documents. It was very much a kind of a reporting team endeavor, but he was in charge of the creative. He has the mastery of how to make that come alive on the screen.

Macy said Strong swung for the fences, landing some of Hollywood’s heavyweights.

“We got so lucky,” she said. “Danny got Barry Levinson to direct the first two episodes and that helped Michael Keaton come on board. And then once Michael Keaton was on board, who wouldn't want to work with him? Keaton lost a nephew to a fentanyl overdose, so this was really personal for him. I spent a week with the cast the week the series came out, and they're just so knowledgeable; they had really done their homework. That was really heartening.” 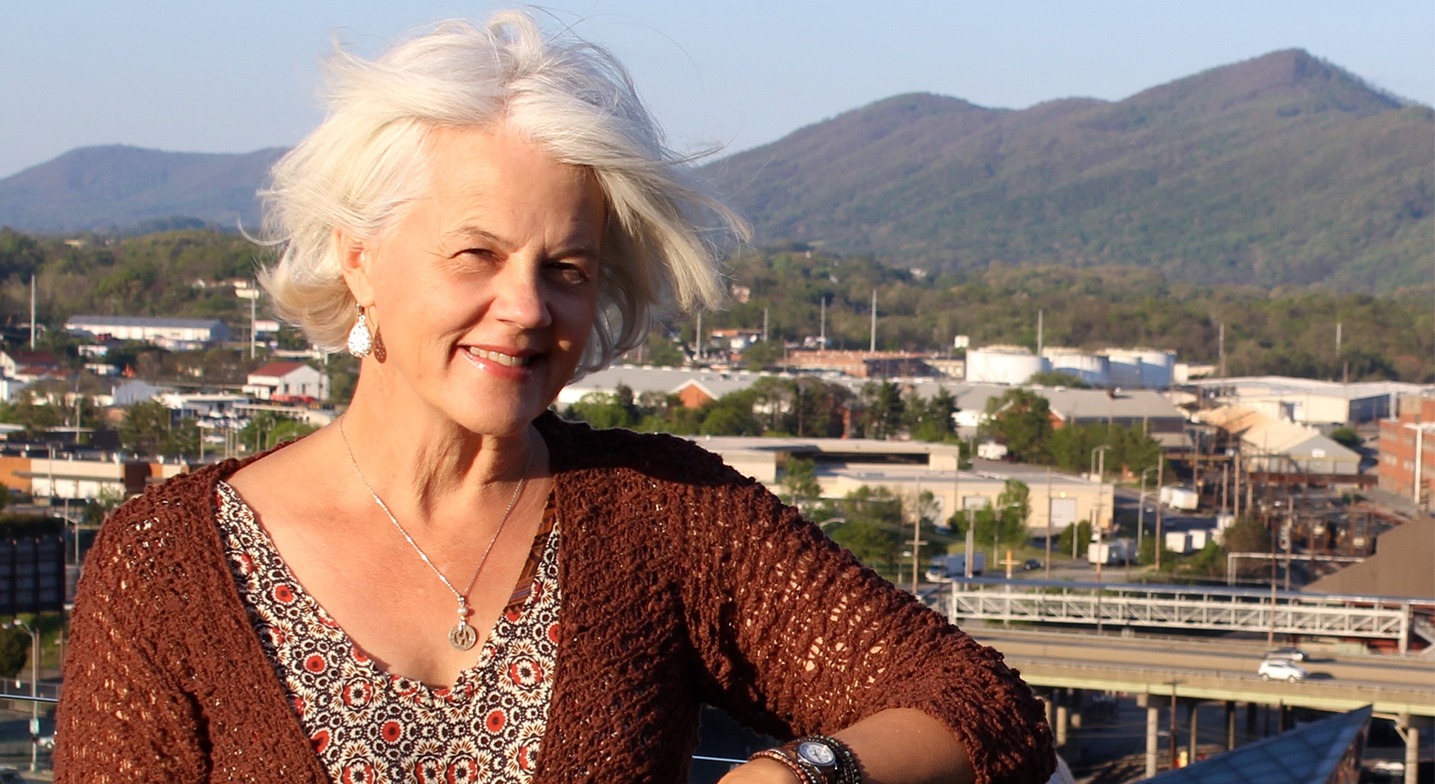 ‘A warning to the rest of the world’

Macy, whose work has long sought to bring attention to outsiders and underdogs — the largely voiceless people left behind by growing inequality, technology and globalization — insisted that “Dopesick” was shot on location in Virginia, including parts of Appalachia impacted by the crisis.

As an award-winning reporter at the Roanoke (Va.) Times for a quarter of a century, her journalism has impacted lives in Virginia and Appalachia. She has gained a larger influence as a successful book author, but with “Dopesick” now being featured on Hulu and soon on Disney+, she happily has become an advocate for the victims of the opioid pandemic.

“It's really crazy,” she said. “We’ve done interviews for hours with journalists in Italy, Germany, Malaysia, New Zealand, Australia, and they're just starting to watch the series because it's a little later airing outside of the United States. They actually have regulations on opioids, so they don't have problems as bad as we do. In some ways, the series serves as a warning to the rest of the world that this can happen, and you need to be advocates for your own health care.

“I’ve operated from Virginia for 32 years, but all three of my books were national in scope, and even international for the first one, so I'm used to becoming a kind of quasi-expert on the topics I take on, but just to have the work brought before so many more eyeballs is really exciting.”

Macy hopes the series helps the nation finally understand the intricacies of the opioid pandemic and, by shining a light on the subject, that a solution isn’t that far off.

“People are watching the show who didn't read the book and then are reading the book,” she said. “I have a new book coming out next August, which is more about solutions. It's called ‘Raising Lazarus,’ and it goes into further detail. The last two episodes of the show have a really strong storyline about treatment: what works, what doesn't work and how stigma holds people back from getting treatment. The series is told so beautifully and dramatically that you really see how people are stigmatized who have this medical problem and how they're discouraged from seeking the treatment.

“Science is the best path out of opioid use disorder. If people just come away with that understanding, I'll be really happy.”

‘We’re all just one fender bender away’

Macy said the opioid pandemic still flies under the radar in our country. The fact that the series can draw people who don't even know about this problem is uplifting, she said.

“Think about it: We're all just one fender bender away from possibly being offered opioids,” she said. “American doctors are still prescribing too many of the things, and then they're cutting people off who are on them long term and who are not misusing them — and that's not good either. There's just a lot more training and education that needs to happen. We're hoping the show will serve as a prompt for some of that as well.”

Macy is proud to be a trailblazer for this cause.

“That's why we get into this as journalists, right?” she said. “We want to hold power accountable, and we want to write things that move people and move them to action. I would be thrilled if the Department of Justice decided to prosecute the Sackler family (the owners of Purdue Pharma) because they basically are walking free while in bankruptcy court. They're going to end up richer than they are right now, and somebody needs to hold them accountable. And if the show can put pressure on Congress and the DOJ, I'm all for that.

“All the Sacklers are walking free and didn't have to sell a boat or a house or anything. That's criminal to me.” 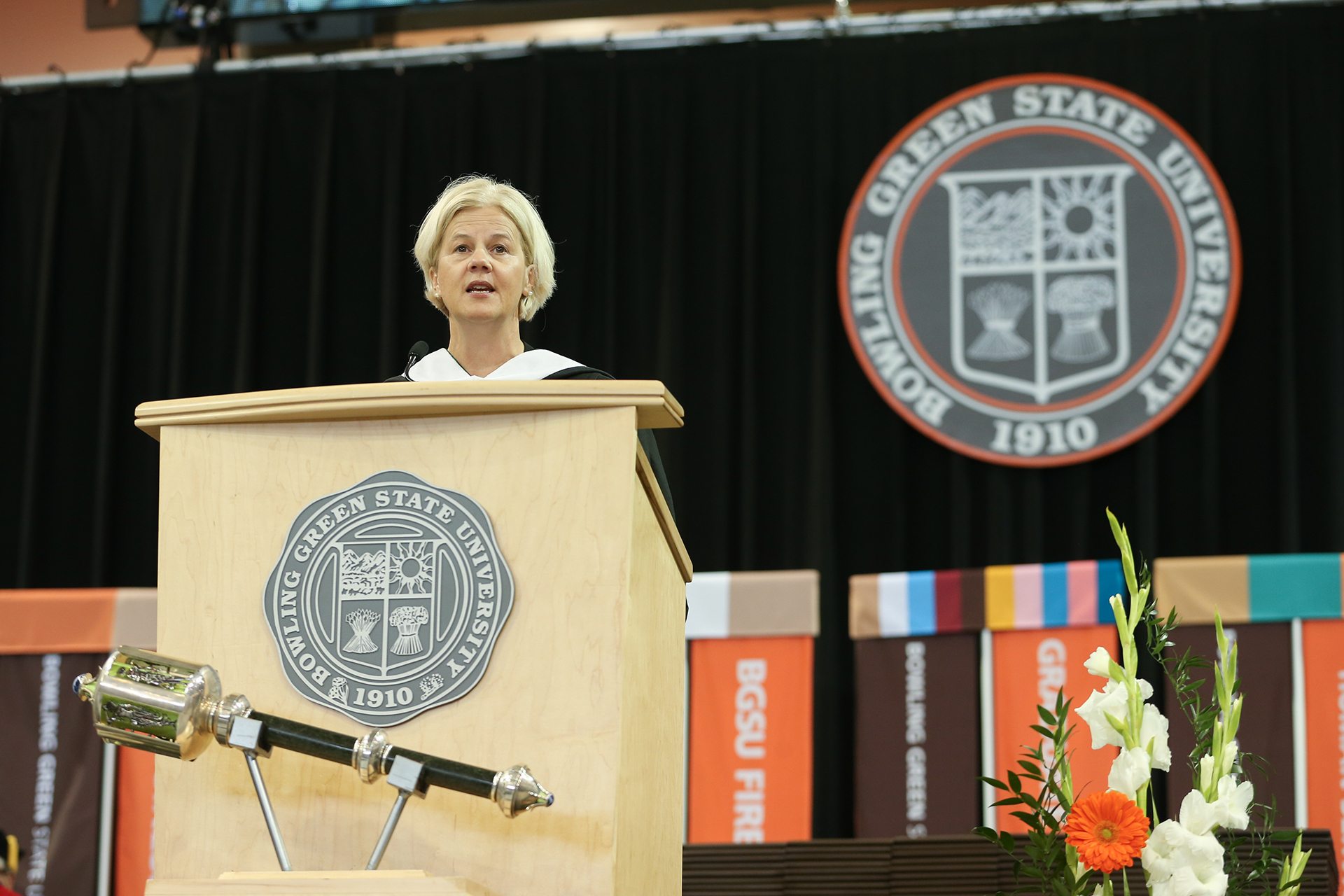 BGSU offered a bridge to the middle class

Macy said she’s thankful for the education received at BGSU.

“I'm from a poor family,” said Macy, whose factory-worker mother raised her to work hard but at the same time to “take no crap.”

“I was the first person to go to college, and I was so lucky and so blessed to be at Bowling Green. It changed my life — you could say it kind of saved my life. I feel like if I hadn't gone to college, not just Bowling Green, but also that experience of having a job that would help me get into the middle class, I might be one of the people I'm writing about."

“I have the great skills that I learned at BGSU, and I'm still in touch with some of my professors there,” she said, mentioning she still talks with former BGSU professors Ray Laakaniemi and Vicki Hesterman. “And they taught me you just keep digging, right? That's what you learn. You keep digging. I've been lucky because most people move around a lot in journalism, but I landed at a place where I had such good editors.”

Macy said the last editor she had at the Roanoke Times, Carole Tarrant, would “just kick my ass” on investigative projects. But that gave her the confidence to apply for and receive the Nieman Fellowship at Harvard in 2010.

“Being a Nieman Fellow gave me the confidence to think, ‘Well, just because I'm in Roanoke, Virginia, doesn't mean I can't call the world's foremost expert on whatever topic I'm writing about. And, basically, these other Fellows who I'm with are no smarter than I am; they just have different connections and more worldly experience. And now I have them as friends to call upon, too — and they have helped me to expand my audience without even moving to do it. Becoming a book writer was a really big step up for me.

“I've worked really hard at it, but I’ve had a lot of luck too.”

To learn more about Beth Macy, her books, projects and events, visit her website.