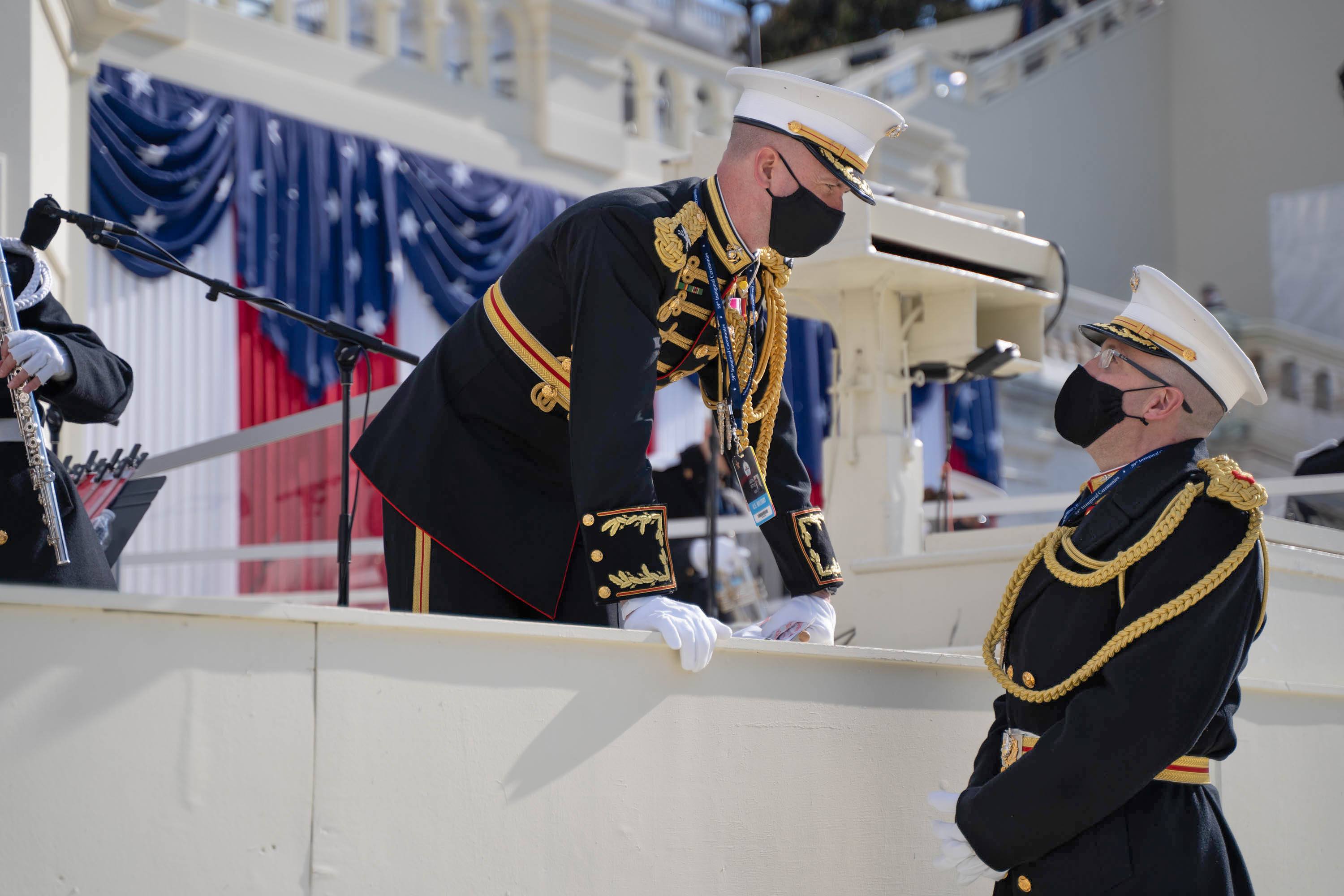 BGSU alumnus has participated in three inaugurations since joining U.S. Marine Band in 2010 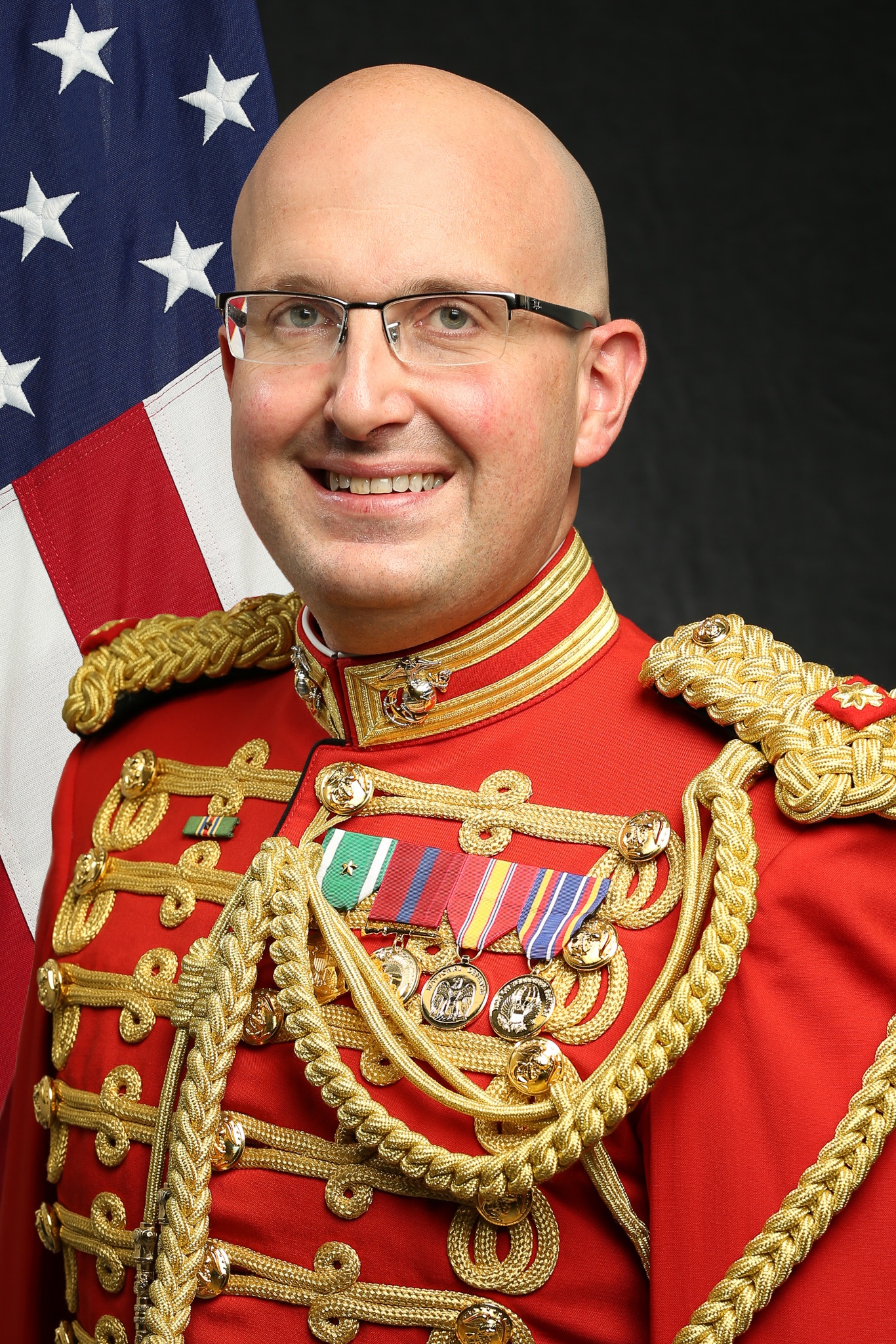 Lady Gaga, Jennifer Lopez and Garth Brooks were among the celebrity entertainers charged with kicking off Inauguration Day 2021 on Jan. 20 at the U.S. Capitol, celebrating the commencement of the four-year term of President Joe Biden and Vice President Kamala Harris.

“The President’s Own” U.S. Marine Band, having performed at inaugurations for every president since Thomas Jefferson, provided the tradition.

Nowlin, who has been a member of the U.S. Marine Band since 2010, said it was exhilarating to see the band play his pieces before the new president and national audience on TV.

“I feel proud that our organization can share that moment with America as we do inauguration after inauguration dating back to Jefferson,” said Nowlin, who also participated in President Barack Obama’s second inauguration in 2013 and President Donald Trump’s inauguration in 2017. “It's a comforting constant and to be a part of that is incredibly special. It's an honor.

“It feels like it has such purpose in that it connects everyone, whether they're present or whether they're watching from afar. It’s something that I have had the great fortune of witnessing with the Marine Band from gymnasiums on tour to the White House grand foyer to watch people just come together through music.”

The Marine Band’s mission is to perform for the President of the United States and the Commandant of the Marine Corps. It was founded in 1798 by an Act of Congress, and the band is America’s oldest continuously active, professional musical organization.

Nowlin has a Bachelor of Music and Master of Music in music education from BGSU’s College of Musical Arts. He last visited the Bowling Green campus when he conducted the band during a memorial performance for the late Mark Kelly in June 2018.

“That was a remarkable experience and memorial —talk about music bringing people together and helping people heal,” Nowlin said. “It was really a special day at the University.”

Nowlin said he is proud to be able to perform and represent BGSU in the public eye.

“It's amazing as I continue to work in the profession during my career how many Bowling Green alumni I intersect with,” he said. “Bowling Green alumnus David Conte (’78) was a guest composer we had, and I transcribed some of his work for the Marine Band. And then, of course, Jennifer Higdon (’86) has become a just a dear friend of mine, and our paths have intersected a few times. Just recently, I transcribed her ‘Blue Cathedral’ for the Marine Band, and that was one of the last concerts we did before COVID shutdown during President’s Day weekend in February.

Nowlin also serves as the Marine Band’s education officer. Throughout his career, he has been a dedicated advocate for music education. He currently manages Marine Band educational outreach initiatives such as Music in the Schools, Music in the High Schools, Tour Educational Outreach and the Concerto Competition for High School Musicians. He has been involved in the Marine Band’s Young People’s Concerts since 2011. Prior to joining “The President’s Own,” Nowlin was a music teacher in Ohio for 10 years, most recently as the director of bands at Brecksville-Broadview Heights City School District.

He is a 1996 graduate of North Royalton High School, a suburb of Cleveland. At BGSU, Nowlin studied horn with Herbert Spencer Jr. and conducted with Bruce Moss and Emily Freeman Brown. In addition to his duties with the Marine Band, he frequently appears as a guest conductor with high school honor bands, community and municipal bands and with university ensembles across the country. His published music and methods are used in lessons and performances around the globe, and he can frequently be found providing clinics and master classes to student musicians in classrooms around the country.