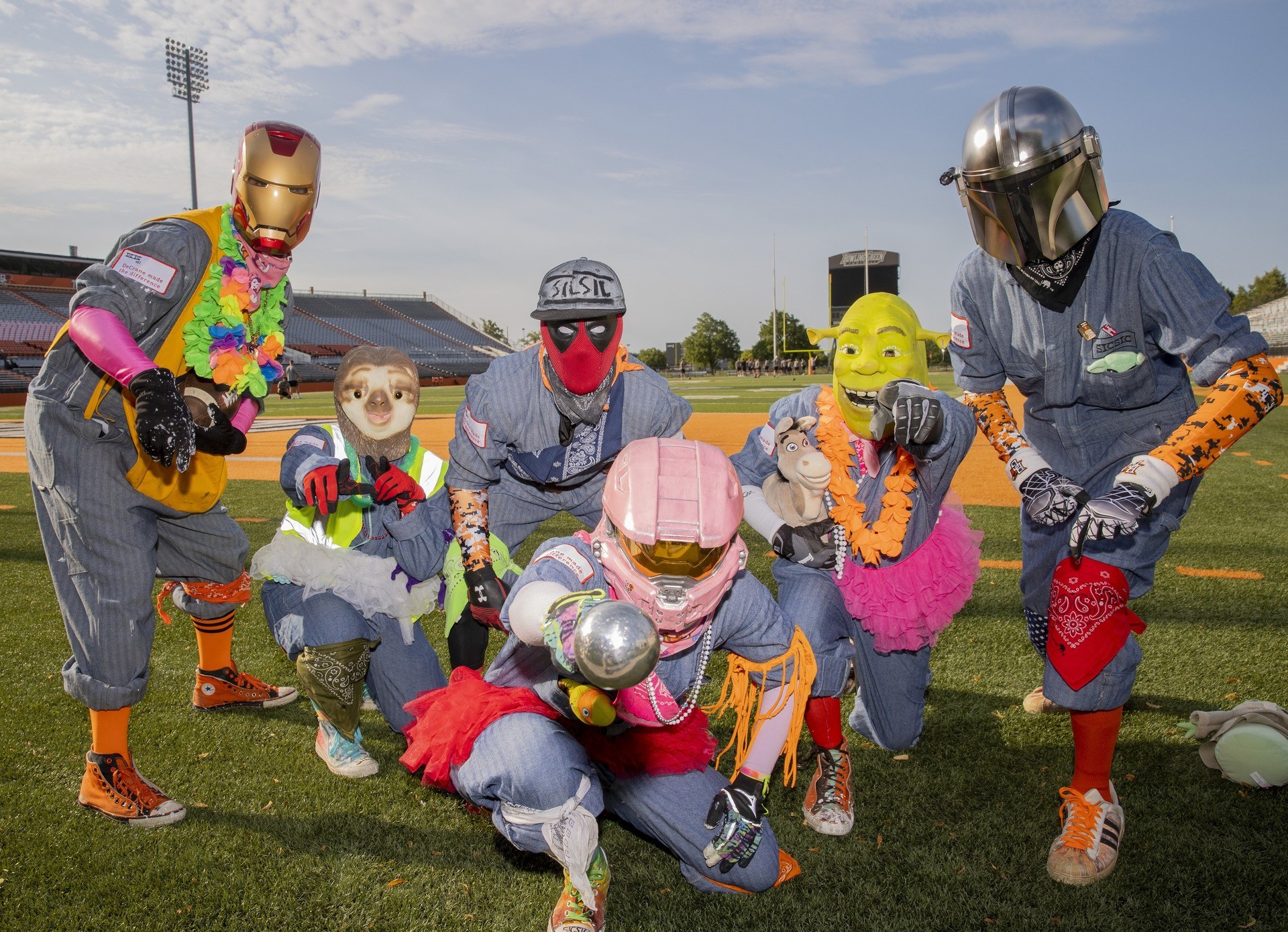 Mysterious group was brainchild of Frank Prout, third president of the University

For nearly three quarters of a century, six masked individuals have been roaming about Bowling Green State University, lifting the spirits of students and faculty by infusing fun into whatever situation they find themselves.

They almost never show up at the start of a game or an event. They arrive at their leisure, and they don't necessarily stay the whole time. And they also randomly turn up at different places on campus to hang signs of encouragement.

Their identities are unknown, and even the meaning of their collective name is shrouded in mystery.

They are SICSIC, a spirit crew formed at BGSU just after midnight on Oct. 5, 1946. 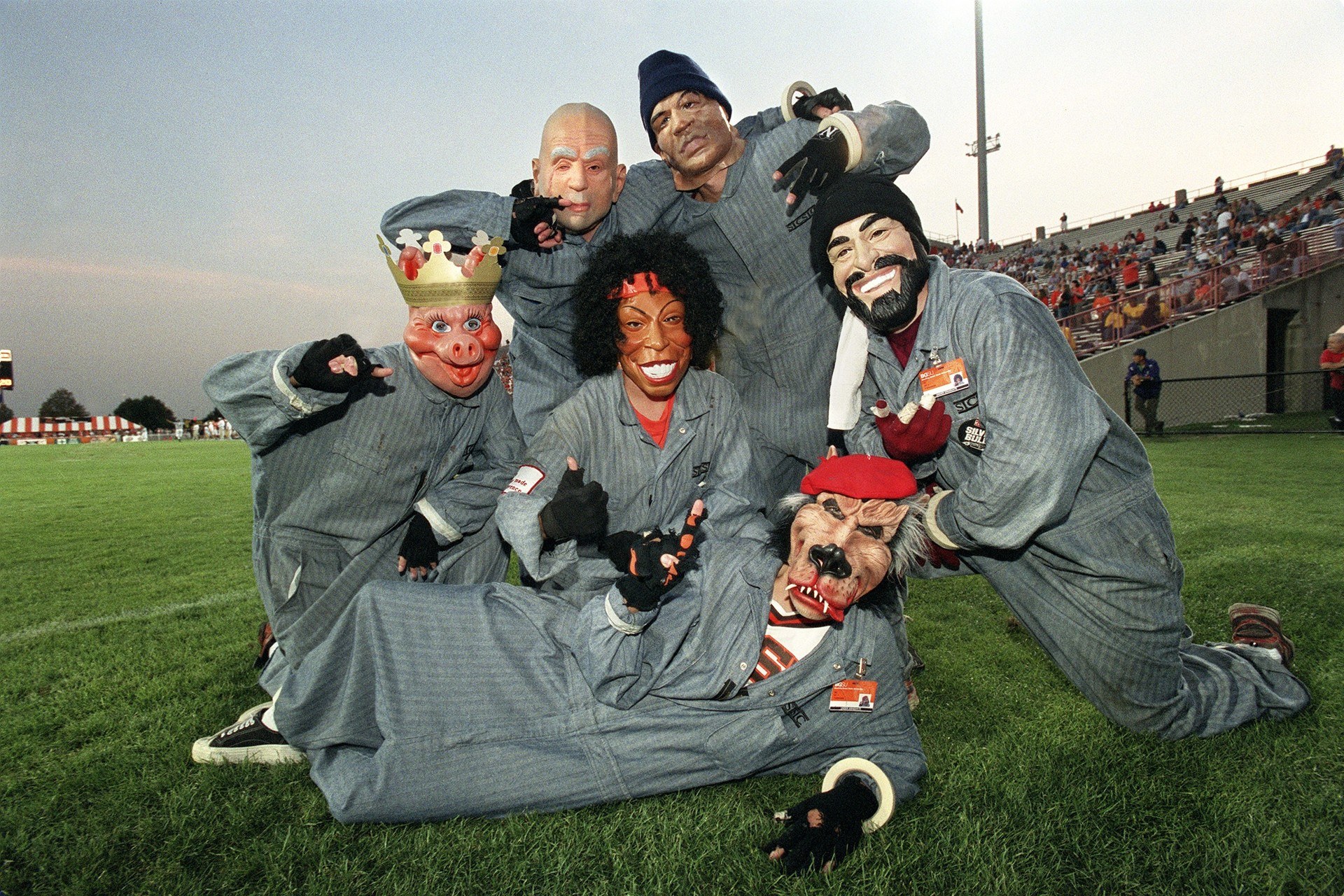 The secret six are born

How SICSIC was formed reads like a legend, yet it’s all true.

Dr. Frank Prout, the third president of the University, serving from 1939-1951, wanted to conjure up some much-needed school spirit following the end of World War II. He chose six students to meet him at University Hall on Oct. 5 to form the official spirit crew for the University.

The mission given to the students? “To do all in (their) power to help make Bowling Green State University a better place by promoting school spirit and goodwill among the students and faculty."

SICSIC was born on that mysterious night.

One of the oldest active groups on campus, SICSIC continues to promote school spirit and keep morale high at BGSU sporting events — now going on 75 years.

Look for the secret six, adorning overalls and masks that have included the likes of Spider-Man, Laura Bush, Shrek, Darth Vader and the Grinch during late nights, sporting events or right behind you. You never know where - or when - they'll show up.

“On this 75th anniversary, we appreciate what started at precisely 2:35 a.m. on October 5, 1946, when BGSU President Prout brought the original six SICSIC members together with a mission to do all in their power to help make Bowling Green State University a better place by promoting school spirit and goodwill among the students and faculty,” BGSU President Rodney K. Rogers said. “As the oldest active student group on our campuses, SICSIC stands out and represents the very best of our University.” 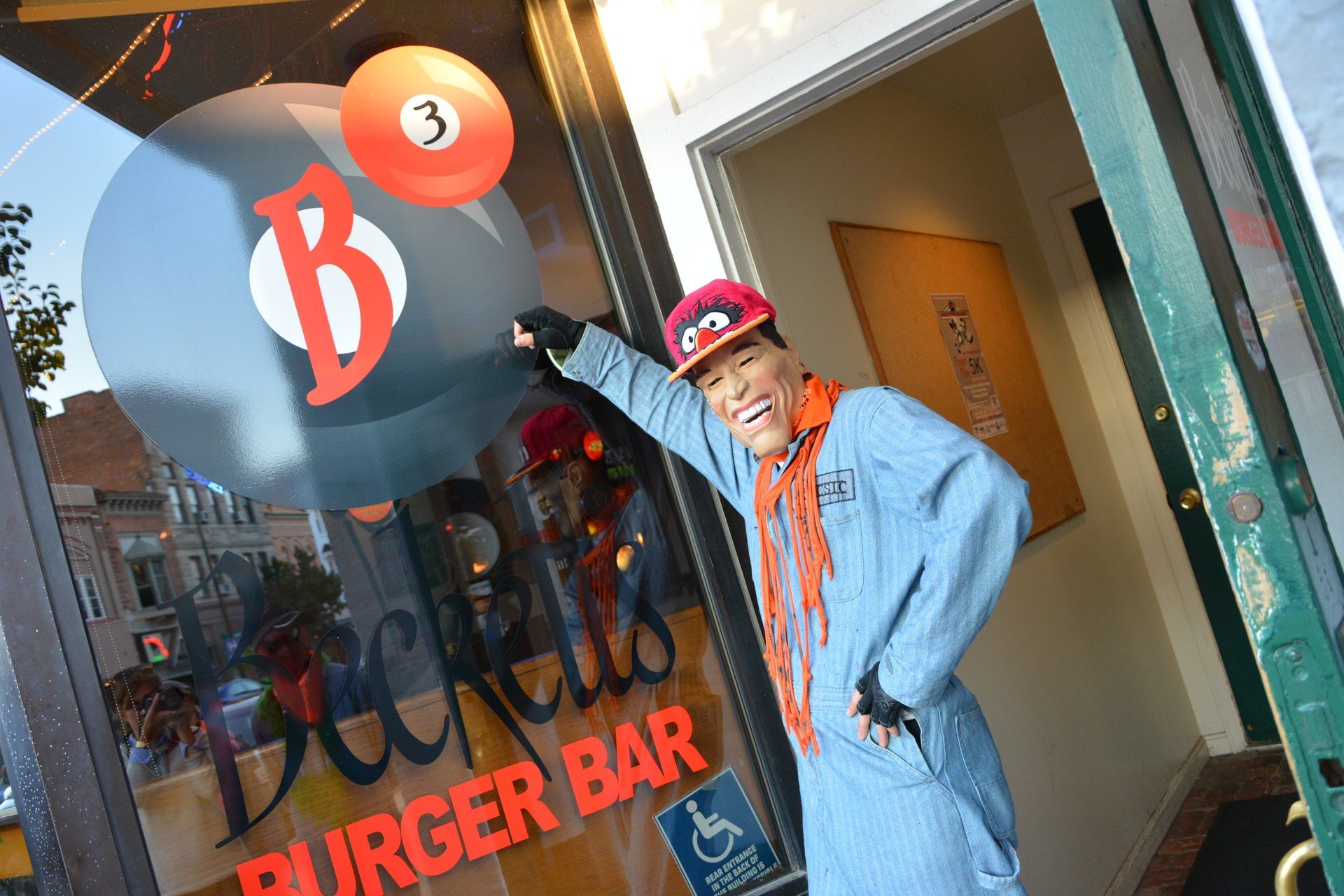 ‘Unique to our community’

Dr. Jacob Clemens, director of the C. Raymond Marvin Center for Student Leadership, has served as the advisor for SICSIC since 2014.

“My day-to-day operations for them is supporting the six of them — with or without their masks,” Clemens said. “It is a pretty independent group, and they kind of decide what they're going to do. My role with them is to help them understand what's happening on campus and where they can help make a positive impact. When people request them or, occasionally, have issues with them, I'm kind of the go-between because I know who all the six are.

“They're weird, they talk in high-pitched voices and they carefully choose their masks because it has to be a mask that has never been worn before — and nobody can ever wear it after they wear it. They keep that mask for all three years. It’s all part of the fun, but it’s really to hide their identity.

“Yes, they're the spirit crew who shows up when they feel like showing up, but what people don't know about the group is the six of them are incredibly close. They develop these really close relationships within the membership.”

Clemens and his wife, Christina, carry on one of the traditions started by Prout and his wife, Alice, who would host SICSIC at their home for dinner.

He has grown to appreciate his role with SICSIC — after all, he also is a member.

“Advisors and University presidents are all honorary members,” Clemens said. “When I became their advisor, I got initiated and went through their process to become a member. There are a lot of things at different universities that look alike, but this is unique to our community.” 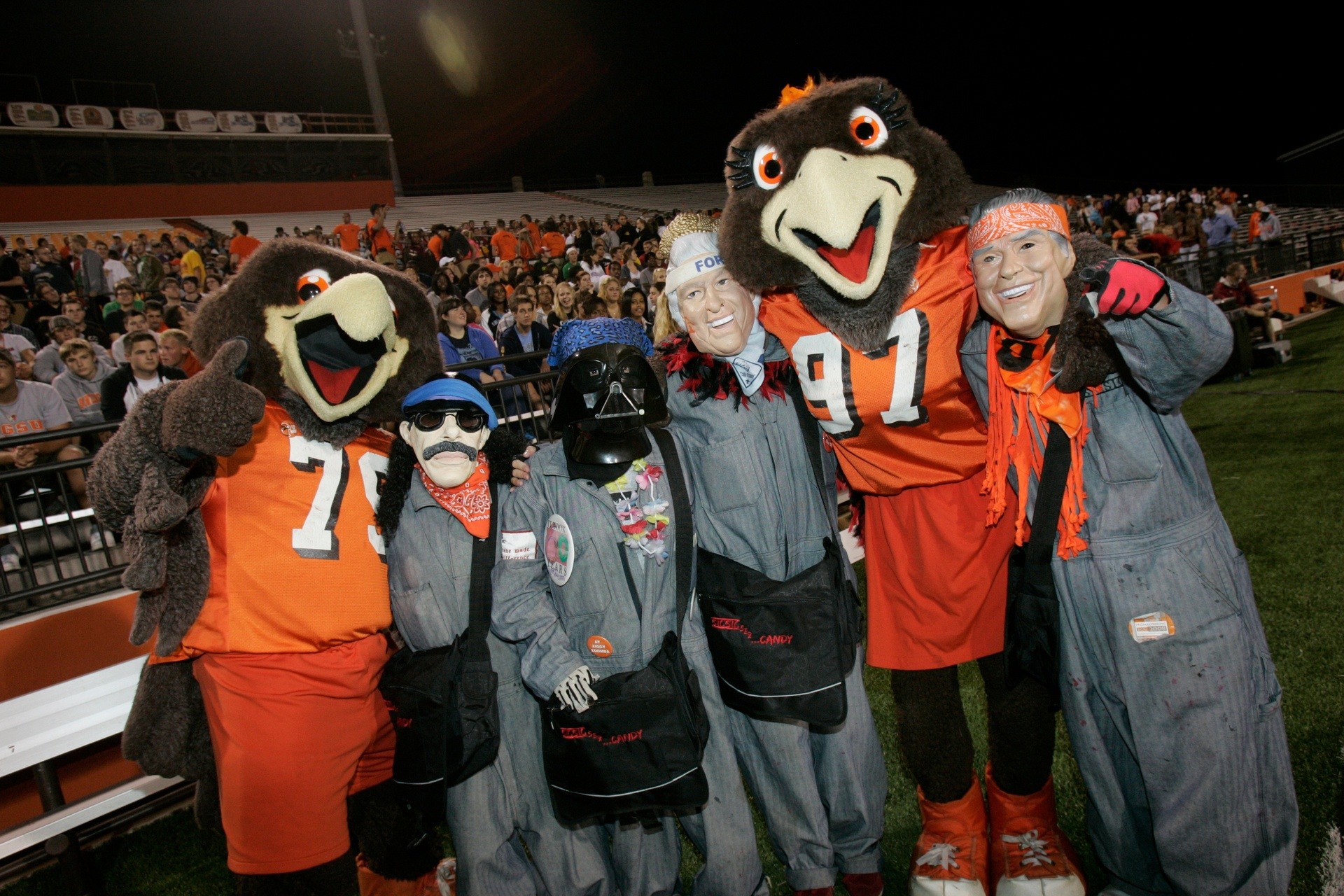 ‘A great honor to be chosen’

Ray Marvin ’60, ’17 (Hon.), for whom the C. Raymond Marvin Center for Student Leadership is named, developed some of the same skills as a member of SICSIC that his center now helps foster in today’s students.

SICSIC had only been in existence for 11 years when he was tapped to join in 1957.

“It was considered to be a great honor to be chosen for SICSIC because the predecessors revealed at graduation were all highly effective and respected campus leaders,” Marvin said. “In those days, the new guys were chosen by the existing group with the intention to pick ‘most-likely-to-excel’ people.”

To Marvin, the mystery that surrounded the spirit crew was a compelling reason to join.

“We received a personal letter from the Office of the University President which requested that we come to the office promptly to pick up an important letter — you don’t turn that down,” he said. “The important letter stated that you had been chosen to become a member of SICSIC and were instructed to be at a specific place at a specific time for further instructions. The induction was, of course, quite memorable.”

Marvin, who graduated with a degree in liberal arts, was active on campus, belonging to several groups. He was a member of Omicron Delta Kappa and the Falcon Marching Band, as well as the Forensics Team. He was involved with Student Government and the Phi Delta Theta fraternity.

There was a closeness within SICSIC, however, that was hard for the other on-campus organizations to match.

“The closeness that developed among the six members was probably the result of our working together at night — usually late into the evening, keeping watch for students seeking to chase and unmask us,” Marvin said of the conspiratorial nature of keeping their identities secret from the campus community. “We painted signs in our secret hideout, loaded up the University car assigned to us and then strategized on the fly about where to put them up with tape.

“During all of this, we would talk about the University administration, its policies, what professors were good at it and who was not, girlfriends and hoped-for girlfriends — lots of ‘guy’ talk — and campus politics. We seemed always to have stories to tell each other about being caught or almost caught sneaking back into the dorm or the apartment in the middle of the night. Fraternity life was very good too, but it felt like my closer brothers were the SICSIC guys.” 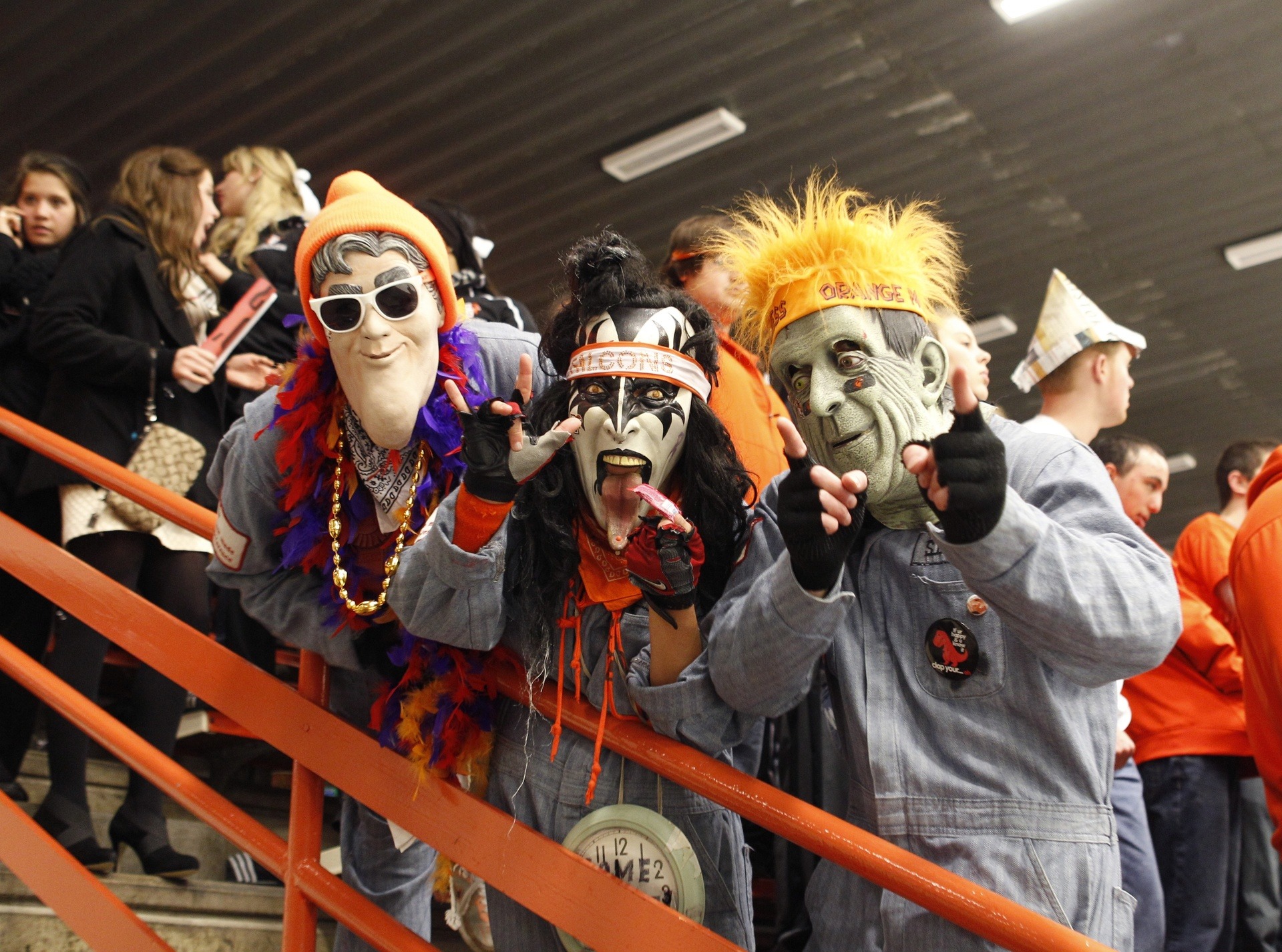 Getting back on the right track

Gregg DeCrane ’69, ’74 worked at BGSU for 30 years and was the dean of students and assistant vice president of student affairs when he retired in 1999. Like Clemens, he also was an advisor for SICSIC for about 10 years near the end of his career.

Around the time that DeCrane took over as advisor, a member of SICSIC approached him with a problem.

“A member came to me and indicated that the group was kind of in trouble and wanted to know if I would help turn the thing around,” he said. “A lot of my initial work with the group was focused on doing that, and one of the things that came about was the reintroduction of female members. After that, the culture changed for the better.”

DeCrane said he has plenty of fond memories of SICSIC, including how they shared a car with Campus Operations and would occasionally lose their privileges to use it.

“There are all kinds of stories associated with the group having a car at one time,” he said. “They would use it to go hang their signs on campus. At that time, they always would carry little chocolate candy bars around with them and hand out to people when they saw them. One time after they used the car one particular night, I got a call the next day indicating that they would no longer have the car because one of the operations professionals went and sat in the car and there was a chocolate bar on the seat. It ended up ruining his suit.”

DeCrane and his Falcon Flame, Darlene ’69, ’78, also would host the spirit crew at their home on occasion. 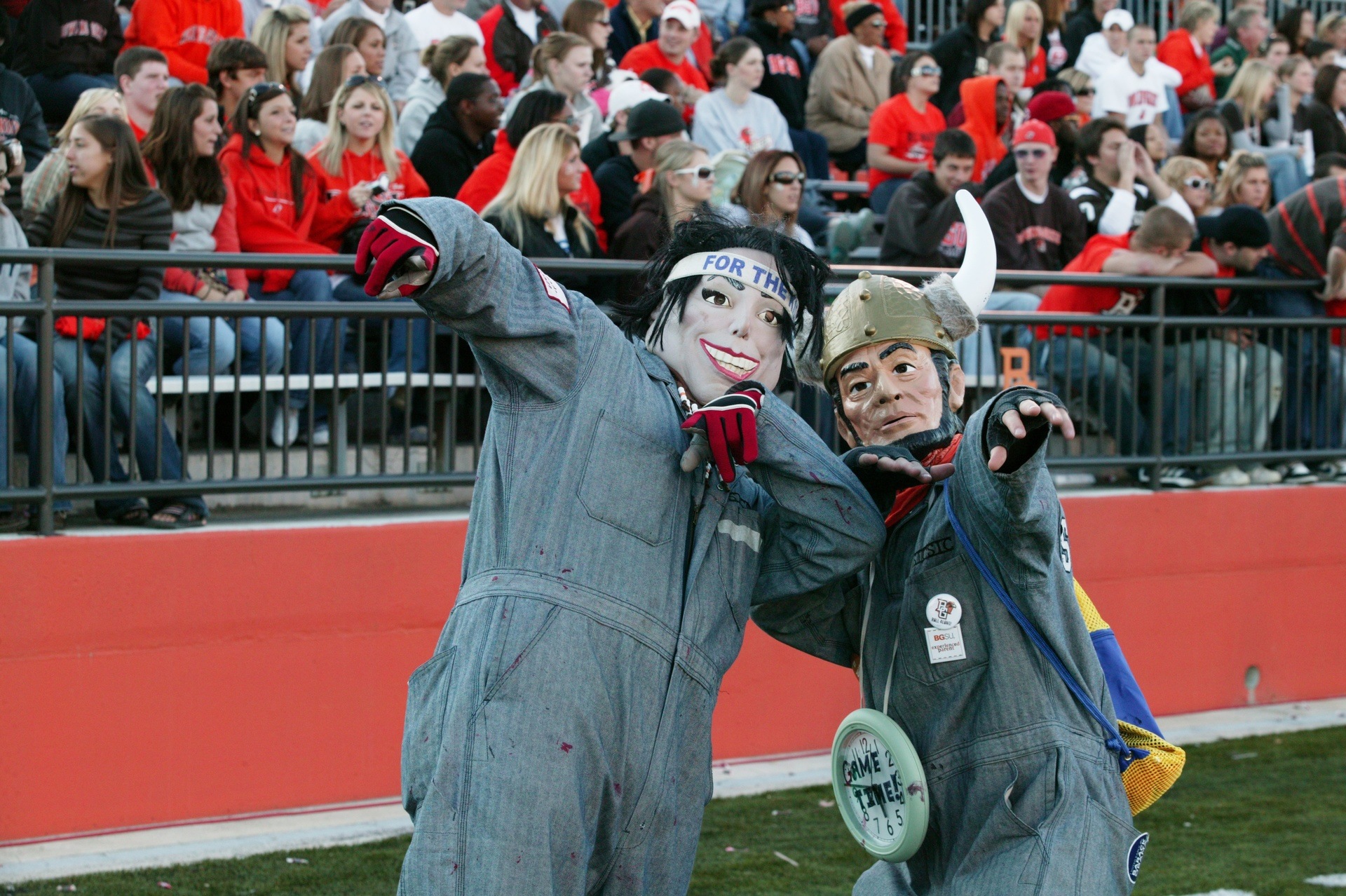 “To be honest, it was probably one of the most enjoyable things that I did at BGSU,” he said. “Knowing that their identities were unknown, I had to play along in that game as well. If one of them came into to my office, we had to think of a good reason they were visiting to throw off any outsiders. Or, if you're walking across campus and you see one of them, you have to kind of be careful how you say something to them if they're with another student. It was a lot of fun in that regard."

“Plus, these students are just outstanding individuals outside of SICSIC. If you go back and you look historically at the people who are involved, they held very high positions on campus. They were involved in a lot of different things, which makes their involvement with SICSIC even that much more significant — just because of the amount of time that they put in that group alone and then trying to deal with the secrecy issues at the same time.”