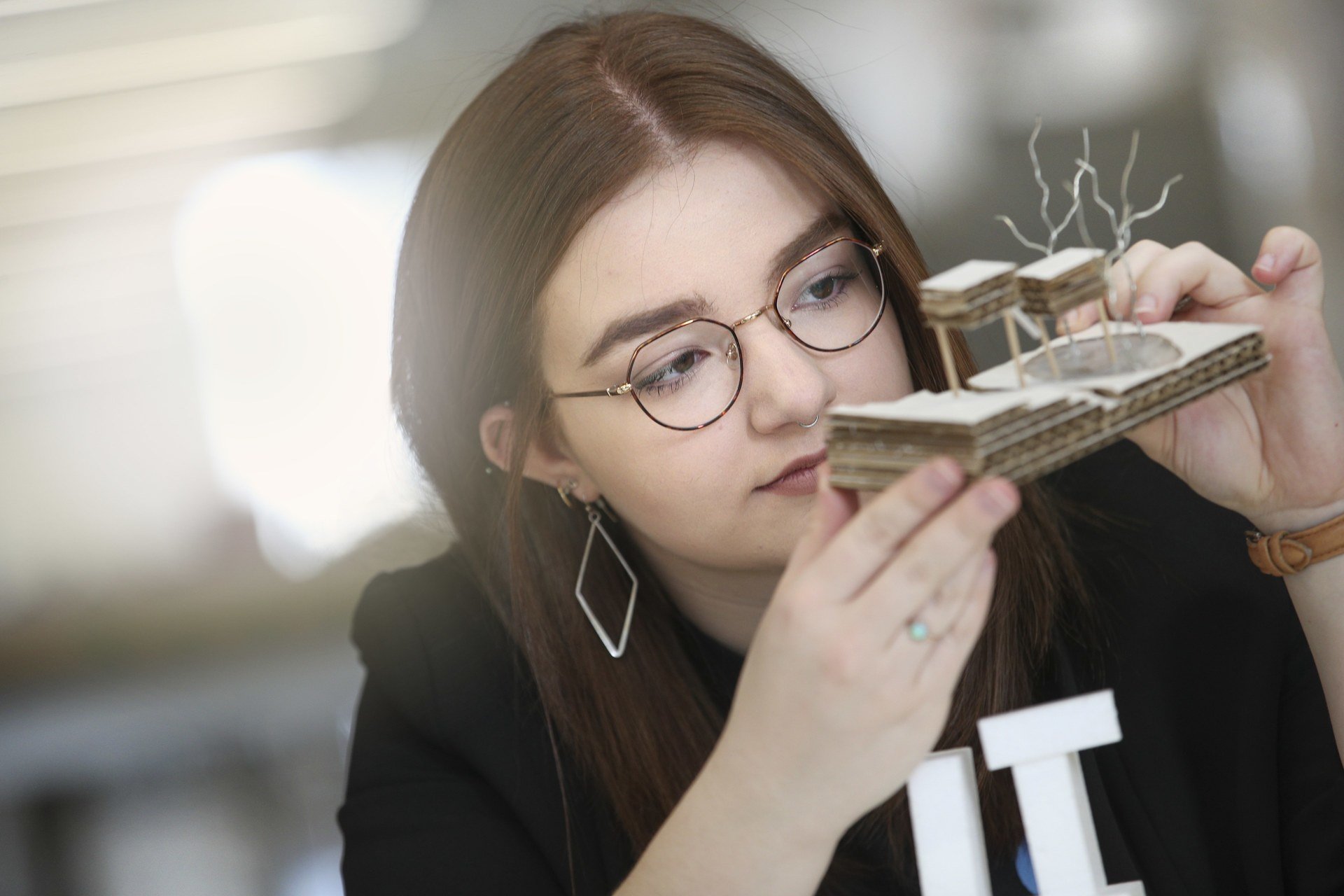 When Baili Null took a career test at Dublin (Ohio) Coffman High School and it recommended the field of architecture, little did she know how spot on it was.

Null, a Bowling Green State University senior majoring in architecture, recently was chosen to serve on the American Institute of Architecture Students (AIAS) National Board of Directors as Midwest quad director for 2021-2022.

“It's very exciting,” she said. “I mean, AIAS is the student component of the American Institute of Architecture, which is a very big deal. Pretty much every registered architect is a part of AIA. Hopefully, it will provide some room for growth after graduation.”

“It has been an honor to know and work with Baili as former AIAS BGSU Chapter vice president and now the Midwest quadrant director,” said Dr. Arsenio Rodrigues, director of the School of the Built Environment. “Throughout her time at BGSU, Baili has demonstrated tremendous potential in her various leadership roles in the AIAS BGSU chapter. She has served as a strong and respected leader in our community. From her first year to today, her passion for the organization has never stopped growing. And she has exemplified the mission of design, leadership and service to her peers and the BGSU AIAS. We are so proud of her accomplishments.”

The BGSU AIAS chapter had a small presence when Null was in her freshman year, but that soon changed with her guidance.

“I've been on the board now for a few years and we've just really helped the chapter grow,” she said. “We doubled in size and I've been serving as the vice president for the last year. The VP role really focuses on growing membership. The Midwest club director kind of has that same role for the entire quad in the Midwest, so I just decided to run for it.”

Null was into art in high school and took a leap of faith after her career test by enrolling at the University without even visiting Bowling Green.

“Architecture is my whole personality now, but when you're in high school there's just very little effort to educate students on the process of becoming an architect,” she said. “Most fields don't require a license to practice unless it's medical or law, so it really wasn't even something I understood when I was applying to schools. I am from Columbus, and I knew I wanted to stay in Ohio.”

Looking back now, Null feels fortunate to have picked BGSU.

“I think the whole experience has been great,” she said. “I think that there have been a lot of opportunities to get more involved in the policy of architecture at BGSU that I wouldn’t necessarily have had at other schools. At Bowling Green, you’re always involved with the faculty and that has definitely helped the program. Plus, the students who are part of the program seem very involved, very engaged.

“If not for the positive environment fostered at the School of the Built Environment, I don’t think I would have joined AIAS or run for the national board or anything like that. I just think we have a really strong and close-knit community in the school. It really does have the potential to help shape people into stronger leaders than most universities’ programs.”

Another thing that separates BGSU from other architecture schools is the Department of Construction Management, which also is housed in the School of the Built Environment.

“I think that the biggest thing that BGSU has done during my time here is that our director, Arsenio Rodrigues, recently brought the architecture and construction management programs together,” Null said. “It’s a major industry problem because architects and construction managers don't always work well together in the real world, but you have to or you'll never build anything. It's just a much more pragmatic approach to the entire building process.

“I think a lot of architecture schools are a lot more theory based and it just doesn't really set you up to actually practice architecture. That's definitely been a major benefit of the BGSU program.

“It's just a more intimate setting to learn,” she said. “You would think that wouldn’t be the case with a younger program like ours, but students have more one-on-one time with professors at BGSU. At other schools, you might be just a number there. I know a lot of our faculty personally just because I've spent so much time with them.”

Null, who will graduate at the end of the semester, has been working remotely for Gutknecht Construction of Columbus since her first co-op. She plans to keep working there when she attends graduate school.