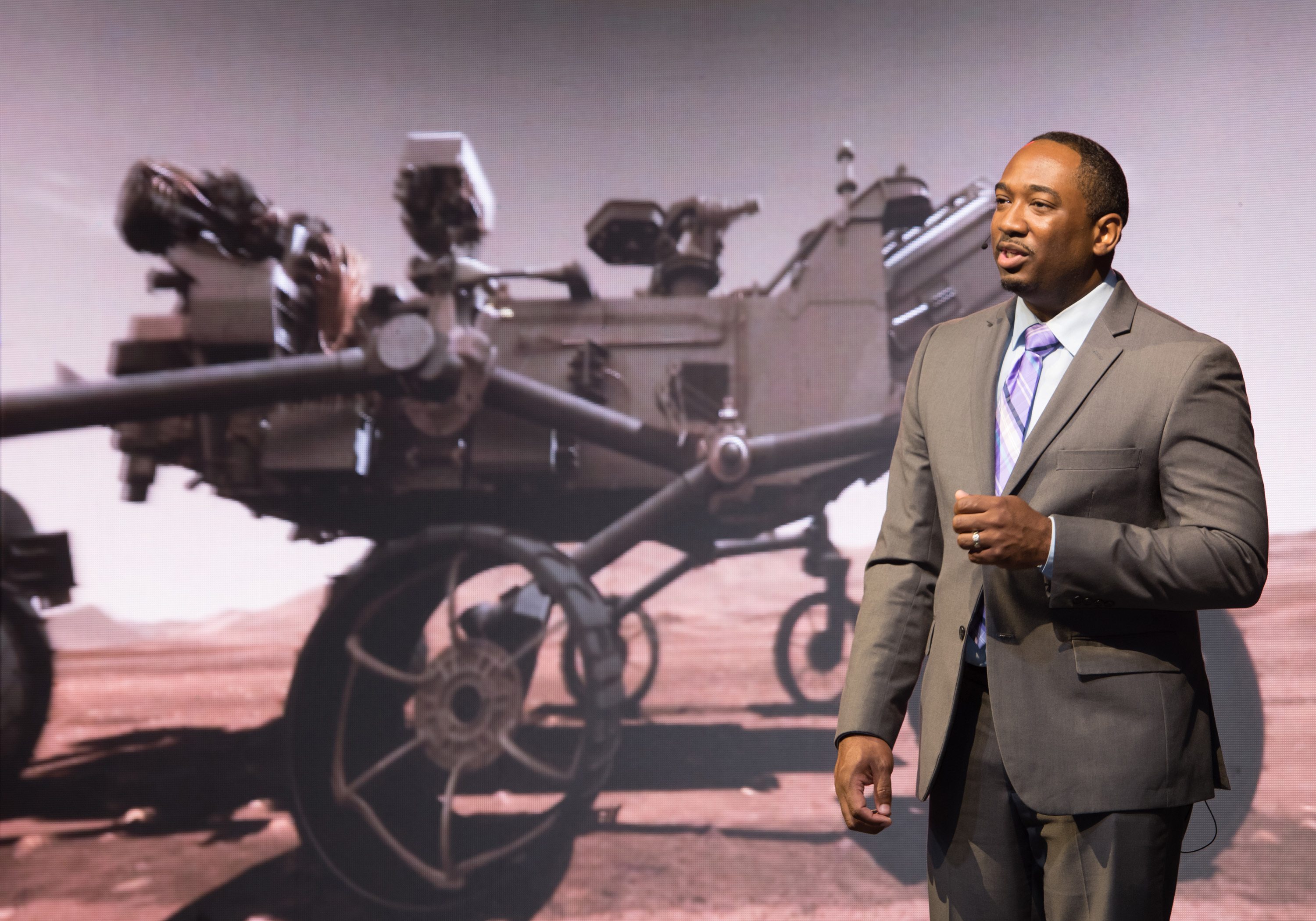 “It was always the dream — and it's still a dream,” said Sandifer, deputy chief of the Space Science Project Office at NASA’s Glenn Research Center in Cleveland. “I feel like I'm living a dream that is better than anything that I could have imagined. I have the opportunity to work at NASA and am especially proud to be provided an opportunity to support sending a spacecraft to Mars. Like most, I’ve always wondered whether or not there's life beyond Earth. This rover is equipped with technology to hunt for biosignatures.” 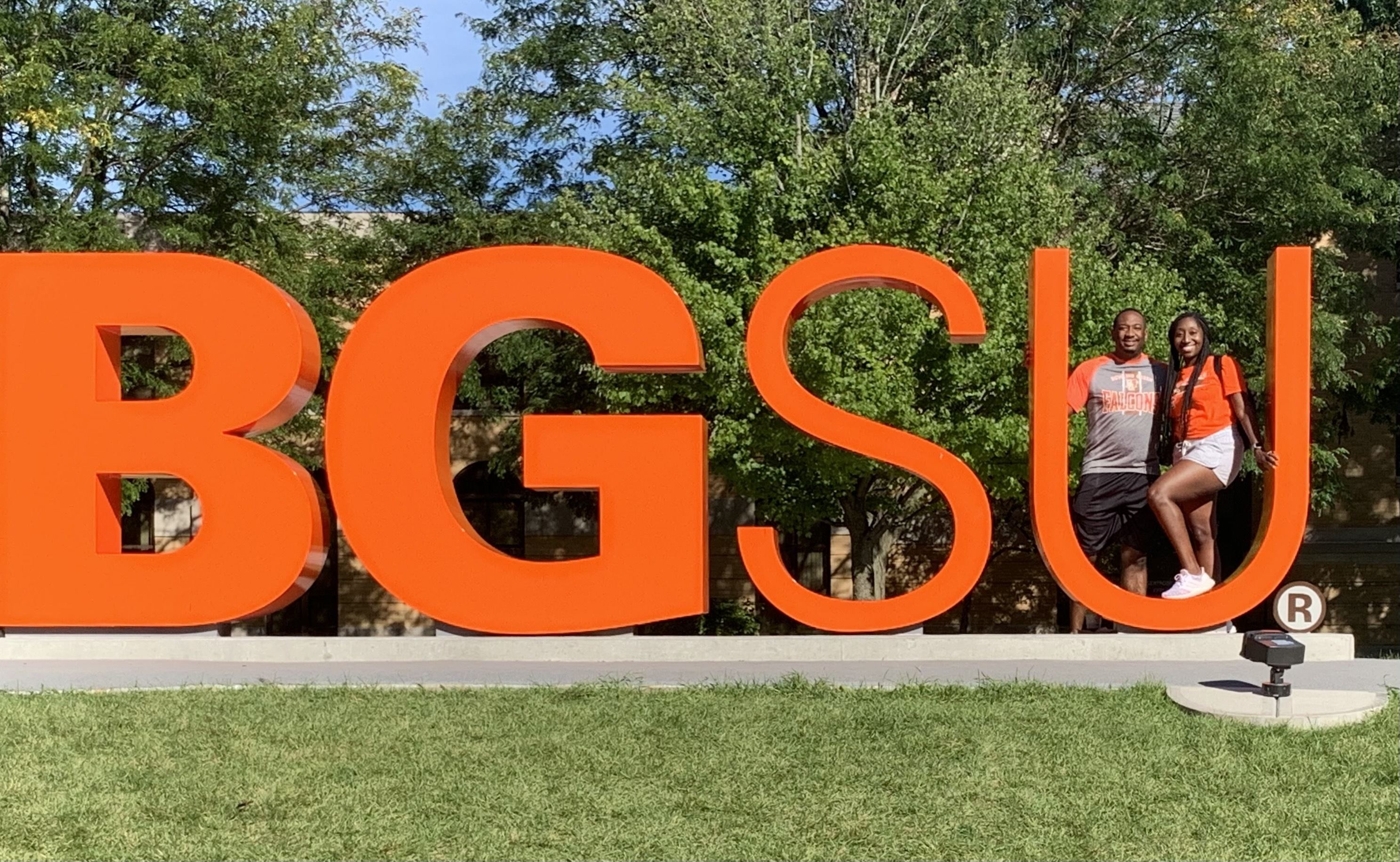 Carl '05 and Victoria '05 Sandifer attend Homecoming on the Bowling Green campus in 2019.

Sandifer, who earned a Bachelor of Science in applied mathematics from the University’s College of Arts and Sciences, started working at NASA as part of a summer co-op after his freshman year at BGSU in 2001.

He continued working with NASA while attending BGSU. He’s thankful that the faculty and coursework was flexible in allowing him to pursue his career interests.

“I'll tell you, my interest in math and all the support I've had along the way is truly a dream come true — it's a humbling situation,” Sandifer said. “When I started at NASA, I would drive back and forth between Bowling Green and NASA in Cleveland. At NASA, they were teaching me the fundamentals of orbital mechanics and mission design. I had professors like Dr. Craig Zirbel at BGSU that I confided in and shared some of my NASA work experiences with, and many of the professors really embraced the work that I was doing. They really challenged me to make sure that I was using solid approaches to address challenges.”

Zirbel found an email he wrote to Sandifer in 2004 about his work with NASA: “I am glad that you're getting near the end of the process. You've worked awfully hard to get into the applied math major, satisfy the requirements, and keep up your work at NASA. I hope it works out well for you in the end and that it will have been worth it.”

Sandifer had started at BGSU as a technology major, but switched to applied mathematics, which meant that he had to squeeze challenging math classes into a shorter time frame than usual, Zirbel said.

“Carl’s internships at NASA made the scheduling difficult, but we found a way through and he worked hard and finished the degree,” Zirbel said. “I was lucky to have Carl in Calculus III, where we literally describe the types of trajectories in space that spaceships follow. He went on to calculate orbits for a Jupiter orbiter mission.

“I am so proud of Carl, taking what he learned at BGSU about science, math and programming, and working hard over many years at NASA to contribute to the power system for the Perseverance Rover. He’s a great example of what can happen when you commit yourself to learning what you need to know in order to follow your dreams.”

Sandifer remembers fondly his time at BGSU, from being a member of Phi Beta Sigma Fraternity Inc., to all of the great friendships he made.

“I still talk to my fraternity brothers today,” he said. “Collectively, the combination of all of the faculty and the professors, the Multicultural Student Center, and, of course, just the atmosphere at Bowling Green. It was just all the different pieces that helped make me become a successful student and now successful in my career. I can envision how the culmination of all of it has supported me today, years later. It seems like it was yesterday, but I guess it’s been quite some time since I left BGSU in 2005.

“I still have great relationships that I made at Bowling Green and I met my Falcon Flame, Victoria, my wife of 15 years, at Bowling Green. It's the place that started it all for me from a career standpoint, plus lots of fond memories.”

Sandifer started working with NASA’s Radioisotope Power Systems (RPS) in 2012. The vast majority of that time he spent working hand-in-hand with the U.S. Department of Energy (DOE), ensuring that the Mars Perseverance Mission had all the fuel needed to support powering the rover.

“The power system for the rover is actually intended to last for a minimum of 14 years,” he said. “We've got the Voyager spacecraft that also utilizes Plutonium-238 dioxide and it's still been flying for over 40 years now. It's in interstellar space and has actually left our solar system. We rate the power system for 14 years, but it can still provide power well beyond 14 years.”

The DOE ensures the availability of the systems, and the RPS Program collaborates with them to ensure that the mission requirements are met. The DOE also provides the Plutonium-238 dioxide fuel, which has a half-life of about 88 years.

“We utilize the heat that is generated from the radioactive decay of the isotope; that heat is used in conjunction with our thermoelectrics technology to convert it into electricity,” Sandifer said. “Then, we use the RPS to power the rover. For the Mars Perseverance Rover, the multi-mission radioisotope thermoelectric generator (MMRTG) that the DOE develops, creates about 110 watts of nominal power, which is great because you don't have to rely on sunlight in order for it to operate.”

Sandifer worked in the RPS Program for eight years before being selected in July 2020 to become the deputy chief of the Space Science Project Office.

“Now, I have a portfolio of science activities,” he said. “We manage the science portfolio for NASA’s Glenn Research Center and the development of different types of technologies and systems, including a new dynamic RPS technology and also a next-generation RTG technology. We're enhancing the efficiency of our power systems and also developing systems that provide greater power to support more missions.”

When Perseverance touched down on Mars, Sandifer couldn’t help but think of future possibilities.

“I'll tell you, it was just an incredible feeling — to be able to support something of that magnitude, in my mind, is the dawn of a new era,” he said. “This is the most capable rover that's ever been sent to Mars, and with this rover we will be able to see and hear the Martian environment. As a matter of fact, I was able to hear the first wind gusts on Mars that were provided by the Perseverance Rover.

“That made me think about all of our future plans,” he said. “It made me think, wow, this one day could be a home to humankind. You know, in a few years we're planning to launch the first woman and the next man to go to the moon and we're going to have a sustained presence on the moon as a part of the Artemis program.

“These are the building blocks and the steppingstones for our moon-to-Mars space exploration strategy, for humans to travel to Mars in the ’30s.”

“The Perseverance Rover is going to send back so much data that is important to science, to understand how a different planet works and the possibility that life might have emerged there,” Zirbel said. “The pictures and data that the rover is going to send back will inspire another whole generation of people to study science and math so they can help us take the next step in understanding the universe and our place in it.”

‘All dreams are possible’

“It is truly an honor to be a Black male working at NASA, being able to support something greater than myself,” said Sandifer, referencing the rover landing during Black History Month. “I've had great mentors along the way, so one thing that I strive to do is also mentor others. I try to mentor young career professionals and STEM students as often as I can.

“Even when I was in class at BGSU, there weren't a lot of students who looked like me. And as I am working at NASA, there are not a lot of fellow employees who look like me, so I encourage as many professionals of all races to get involved.”

Sandifer said that working for NASA has made him realize that all dreams are possible.

“In the early years, I was focused on developing trajectories and mission designs and trying to figure out if the concepts could be achieved in the second half of my career,” he said. “Lately, it seems that we've been doing many things that seemed nearly impossible early on in my career.

“I would just encourage all students not to limit themselves based on pre-conceived ideas of what is possible. Instead, really get out there and give it your all, no matter what your dream is.”