Holiday program provided food and books to 192 children and 1,156 items to food pantry

Bowling Green State University fraternities and sororities came together as one to make an impact on the community this fall.

The campaign #GreeksGive included 29 of the 38 Greek chapters that participated in the third annual Holiday Giveaway Program. The holiday program is hosted by the Office of the Dean of Students, said Danielle Haynes, coordinator of student case management and originator of the holiday project.

“The goal is to give back to our community, who gives so graciously to our students on a consistent basis,” Haynes said.

As part of the program, kindergarten and Individualized Education Program (IEP) students from local elementary schools were “adopted,” and each student received a gift, book and certificate of appreciation. 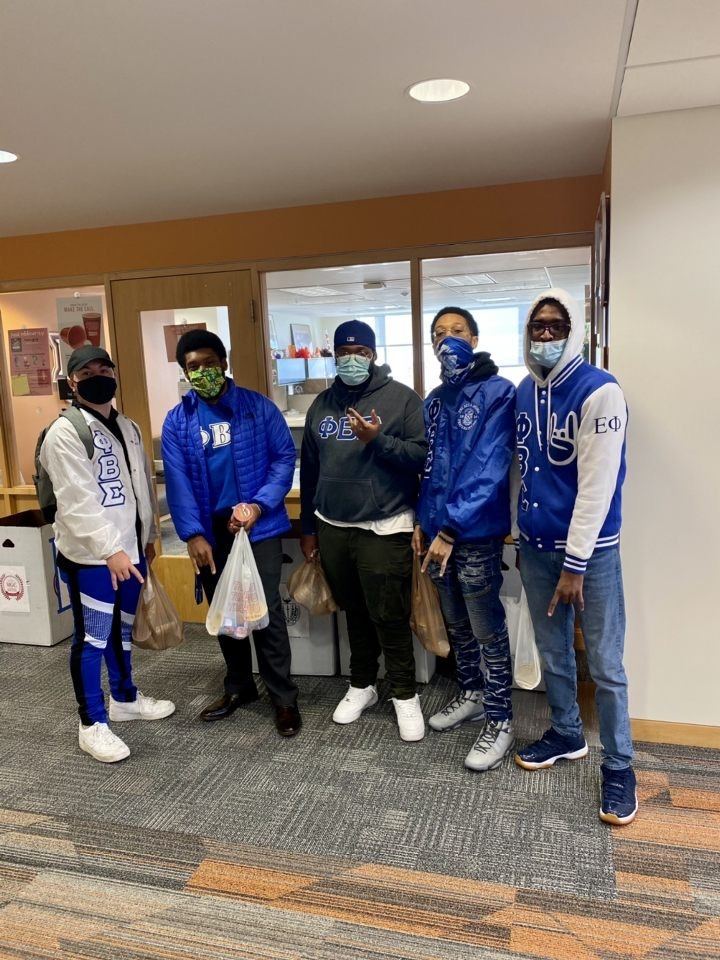 Emily Suchan, president of Order of Omega, the Greek honor society, helped lead the project this year. After Order of Omega members decided to focus of food insecurity for its cause, Suchan met with Haynes, who oversees the BGSU Grab and Go Food Pantry.

“After meeting with her, I thought it would be a great way for Order of Omega to help the community and allow members to really get involved and help,” Suchan said.

The organization chose to focus on food insecurity because it is a timely issue. Members knew that many people have been financially strapped during the COVID-19 pandemic. “We knew there would be more need this year and that we could make a different,” she said.

She also wanted Order of Omega to have an active partnership. She described the members as “especially busy, stand-out leaders in the community,” but admitted that Order of Omega had “shifted to a back-burner responsibility for many people.

“As president, I wanted to change that and make membership in Order of Omega more meaningful. Choosing to help with food insecurity gave our members, and the other chapters on campus many different ways to help so that everyone could get involved. Each food voucher was only $4, literally less than the cost of a Starbucks coffee, so I knew that donating to this cause wouldn’t be financially draining for the members, and that they would be more likely to help.”

Suchan worked with Emma Powers, marketing chair of the honor society, to develop a social media campaign for the initiative.

“Emma made graphics that we posted on our Instagram and Facebook accounts describing ways chapters and members could get involved,” Suchan said. The campaign included a graphic explaining what items could be donated for the food drive, a Venmo Bingo board for members to post on their personal accounts to spread awareness and encourage donations toward the food vouchers.

“I was really proud of the results and so excited that we raised more than the goal and gave a little extra,” Suchan said. “We created this initiative, so it became really personal for me. Our chapter had never done anything like this, so I spent so much time researching and in meetings trying to plan and figure it out. Seeing the chapters and members step up to help or learn more about the cause meant so much to me.”

According to Haynes, in addition to Greek life, additional departments and groups have been offered the opportunity to support the program.

“This year we also had Better World Books as a sponsor. They donated approximately 150 books to ensure each student would receive a book.”

COVID-19 required some changes to the program this year. In previous years, they delivered the items to each student during the school day and were able to interact with the students. Because of COVID they scaled back the event to make sure everyone was safe and well. They did not wrap the books and instead of a gift, they provided gift cards to Porkbelly BBQ “to ensure the least number of individuals touched the donated items,” Haynes said. The items were given to the principals who then delivered them to the classes.

Often the chapters have their own national philanthropy focus; this event is directed at making an impact at the local community level, said Stacey Allen, assistant dean of students with fraternity and sorority life.

“It’s this sense that ‘My (chapter) letters don’t matter. As a fraternity or sorority person I’m helping with something beyond my chapter,” Allen said. “

“I really enjoy this event because it starts to build unity for our chapters and members, and they recognize they are part of something together,” Allen said.