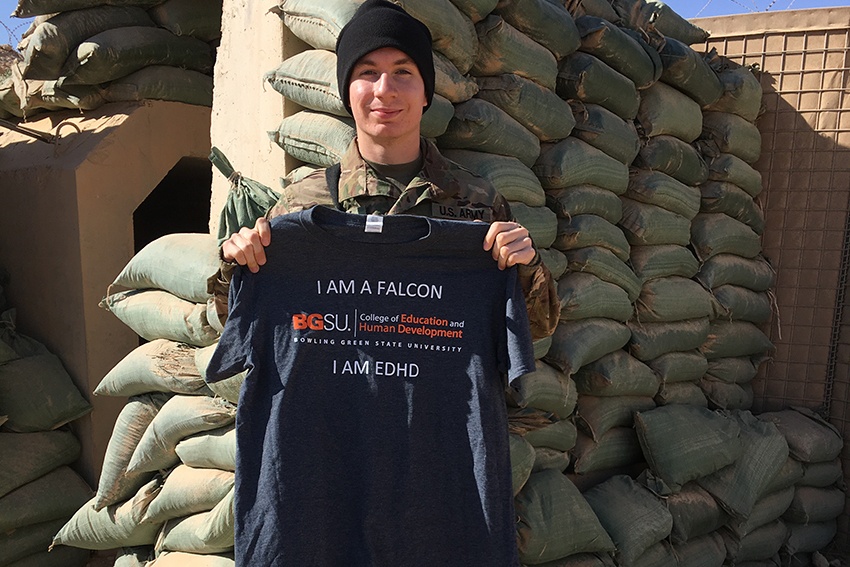 The end of the spring semester at Bowling Green State University was hard for Frank Scott Abbey, and not just because classes switched to an online format and the commencement ceremony was delayed.

“My residence advisor position ended sooner than expected because of COVID-19, and the job offer that had been waiting for me after commencement was rescinded,” Abbey said.

The apparel and merchandise product development major in the College of Education and Human Development said his journey to obtaining his degree, however, has been unusual since it started.

His academic career started in 2015, a year after he joined the U.S. Army National Guard. Service to his country led to an Iraq deployment, where at age 20 he was appointed to team chief and earned the rank of corporal.

AMPD might seem like an unusual major for a military corporal, but he said, “The process truly intrigued me — the sourcing of materials through the placement. Really, the whole story.”

During his service, Abbey maintained a GPA of 3.0 or higher. In the spring of 2018, he returned to Ohio with no lives lost under his unit's watch.

Balancing work and learning taught him how to adapt to changes and accept compromises.

“It was a little tough, though, seeing all my classmates graduating a year before I would,” he said.

More “life lessons” came from adapting to the double disappointment of an internship ending and a job offer being rescinded. As a result, he said he plans to renew with the Army National Guard and possibly return to BGSU as a graduate student in the School of Human Movement, Sport and Leisure Studies, where he said he hopes to pursue a master’s degree in kinesiology.

In order to graduate this semester, Abbey took Winter Session and summer courses — “anything I could do so I didn’t fall behind” — and he reached out to his professors for extra assistance.

“I’m very thankful to those professors,” he said. “I worked hard with AMPD faculty to complete two of my classes.”

He was surprised, while serving overseas, that the faculty sent him a care package.

"I truly love learning from professors who are passionate about their work,” he said. “Their passion drives my own when faced with difficult assignments or exams.”