Fifty years of environmental consciousness and the evolution of sustainable practices 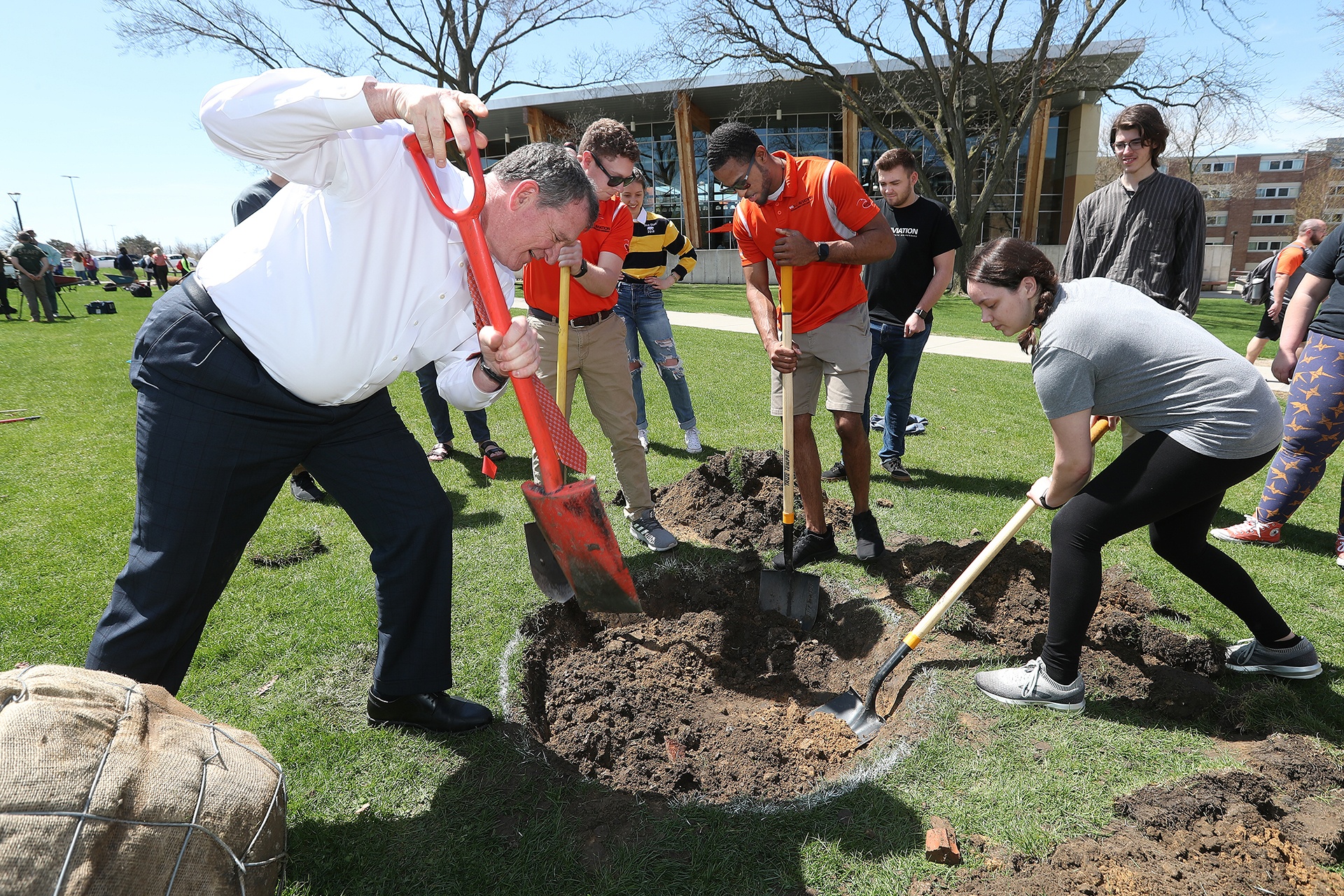 Tree plantings have become a standard feature of Earth Month at BGSU. President Rodney K. Rogers, Ph.D. ‘81 can be depended upon to do his part along with a large group of students in the annual event. This year’s event has been postponed until a later date to be determined. 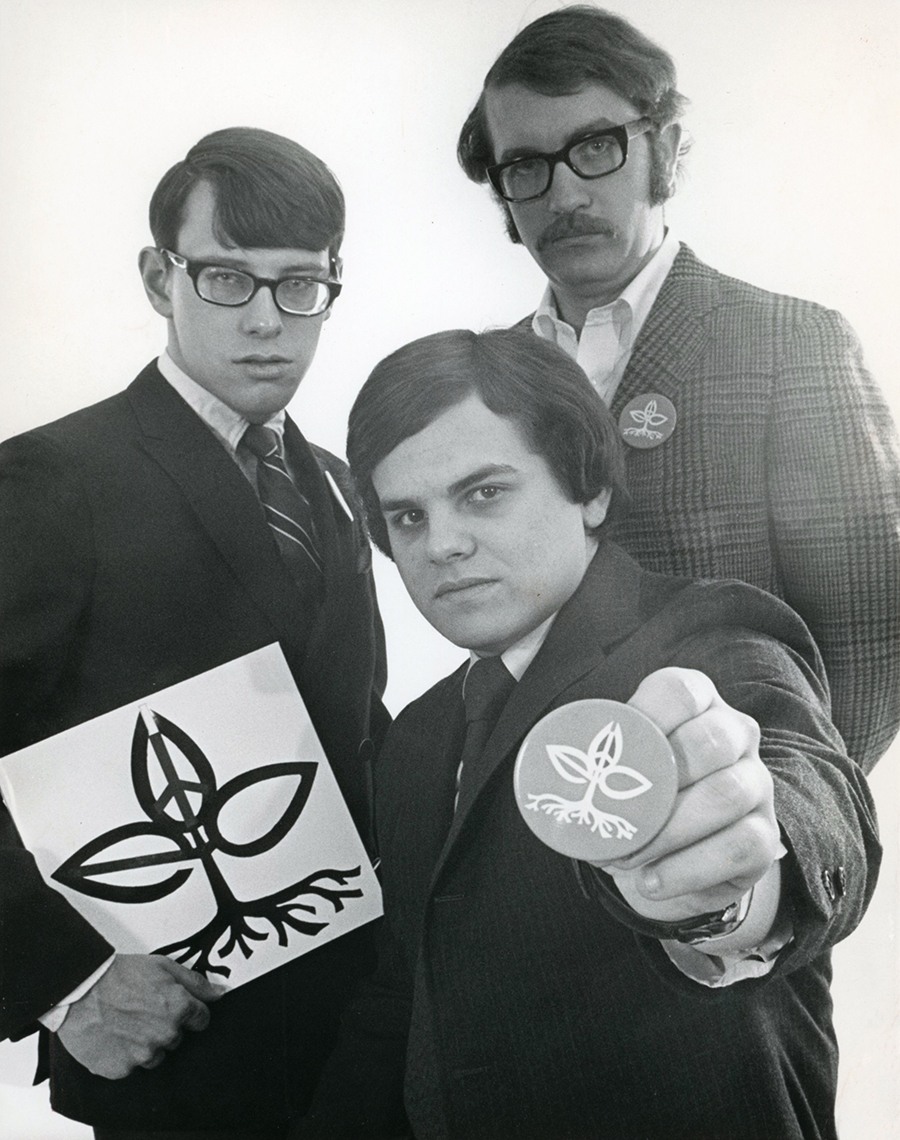 Greg Thatch ’71 holds a button featuring what many at BGSU hoped would be the “environmental symbol for the 70’s,” designed for the first Earth Day environmental teach-in by University Publications Director, Jerry Fischer. Thatch was joined by Ernest Brass ‘70 (on left) and Lee Stephenson ’70 in a trip to Washington in hopes that Sen. Gaylord Nelson (D-Wisc.) would support the symbol for national use.

Over the years, environmental concerns, initiatives and actions have converged and evolved into the concept of sustainability, which promotes a more comprehensive approach to environmental stewardship. At Bowling Green State University, the development of environmentally friendly policies and practices can be traced back to concerned students, faculty and staff who took the initiative to make a difference over the past 50 years.

In 1970, there was an emerging environmental consciousness that found a strong voice in the first Earth Day observance. The year before, rising fears about air and water pollution were piqued by two notable environmental disasters — the massive Santa Barbara oil spill and the spectacle of Cleveland’s Cuyahoga River catching fire. By 1970, the percentage of citizens who cited cleaning up air and water as one of their top three political priorities rose to 53 percent from just 17 percent in 1965.

In Washington, Senator Gaylord Nelson (D., Wisconsin) was looking for a way to add environmental protection to the national political agenda. Inspired by the energy of the student anti-war movement, Nelson proposed a “national teach-in on the environment” and enlisted the support of Congressman Pete McCloskey (R., California) as co-sponsor.

The two sent letters out to campuses across the nation urging participation in the teach-in to educate others about the country’s ecological crisis. BGSU was one of 2,000 colleges and universities that heeded the call and a committee comprised of students and faculty came together to plan a 22-day teach-in culminating in the first Earth Day on April 22, 1970.

The Environmental Teach-In Committee arranged to have BGSU’s coal-fired heating plant shut down the night before consumer activist Ralph Nader’s speech kicked off the teach-in. Students woke up to no heat, cold showers and cold breakfast. Bob Stein ’72 served as the committee’s chairman and recalled that the idea was to dramatize the changes that can be caused by tampering with the environment.

“That certainly got their attention,” Stein said. “Maybe you start thinking about how a few people closing down one part of what you've taken for granted can significantly change your life, maybe you ask a few questions about what other little things can have a large effect and maybe you want to hear from someone who is famous for studying these kinds of issues.” 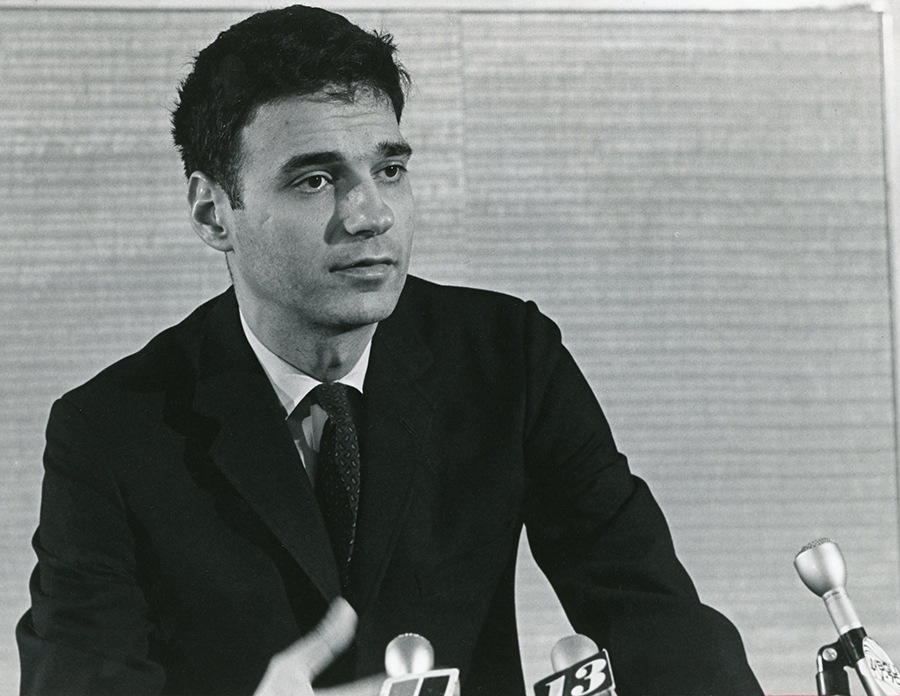 Famed consumer rights advocate Ralph Nader was BGSU’s first Earth Day teach-in speaker, who spoke to a standing-room-only crowd of 3,000 in the Grand Ballroom on April 1, 1970.

The overall theme was to awaken the community and, as a BG News columnist put it, “drag the student body out of its blissful state of ignorance toward the ills of their environment and force them to take a long hard look at their polluted world.”

Stein not only picked up Nader from the airport, but also introduced him to a standing-room-only crowd of 3,000 on hand in the Grand Ballroom to hear his speech condemning the apathy of the American people regarding environmental issues. That propitious start was followed by a full program of panel discussions, speeches, films and exhibits. Later that month, another 3,000 attended a rather alarming speech given by Dr. Paul Ehrlich, author of “The Population Bomb,” during which he asserted that mankind had only a 50-50 chance of surviving past the year 2000.

All of these activities were enthusiastically supported by student council and endorsed by the faculty senate. Afterwards, many students became more active in support of environmental concerns, including opposition to the soon-to-be-built Davis-Besse nuclear power plant along the Lake Erie shoreline. But all that was about to be put on hold.

The Kent State shootings occurred within weeks on May 4. Four college students were shot and killed, and nine others wounded, by members of the Ohio National Guard who opened fire during a mass protest against the bombing of Cambodia by the Unites States.

“We didn’t get very far into May before Kent State happened,” Stein recalled. “But we took the organization that we had and redirected our efforts to help with rumor control, which was a big deal.”

The new environmental student group stepped up and members were among the student marshals who helped to keep communication lines open and maintain calm. Under President William Jerome’s composed leadership, students, faculty, staff and BG residents came together to grapple with the shocking news from BGSU’s sister university, as well as the issues that had precipitated the deadly confrontation.

“It was one of the brightest defining moments in our history,” said Larry Weiss, former director of Alumni Affairs and associate vice president. “The University distinguished itself from all others by remaining open while protesting the Vietnam War and the killings at Kent State in a proactive but completely non-violent way.”

Convergence of ideas and action

As the years and then decades passed, the BGSU community faced a great many environmental issues along with the rest of the country. The oil crises of 1973 and 1979 saw disruptions in supply and drastic price increases, prompting a turn to conservation practices that helped the budget along with the environment. The Three Mile Island accident in the spring of 1979 led to increasing concerns about the safety of nuclear power. Both issues led to more attention to alternative fuels such as solar and wind power. And President Ronald Reagan’s choice of James Watt to be his Secretary of the Interior in 1980 was no small provocation to a growing environmental community.

Through it all, BGSU students and their Earth Day activities tended to be more focused on education and practical action rather than protest, according to Dr. Roger C. Anderson, associate professor emeritus who was among the first to teach courses focusing on environmental politics and policy.

“Our students seemed to concentrate on local issues such as Bowling Green’s dependence on coal-fire energy,” Anderson said. “At the same time, taking action to increase recycling while promoting conservation practices and clean, alternative power sources showed increasing awareness and a sense of personal responsibility.”

Anderson also observed that the environmental curriculum developed in close connection to student interests, and, in turn, increased student awareness and engagement.

Environmental studies as a curriculum at BGSU was organized in the early ’70s and it was understood that it would be an interdisciplinary program from the outset, according to Dr. Donald Scherer, professor emeritus who taught courses in environmental philosophy.

“But it wasn’t until the ’90s that a systemic view of the environment gained real traction,” Scherer said. “From a faculty point of view, the preceding 20 years were about integrating environmental solutions into a broader systemic approach.”

Scherer pointed out that this provided the impetus and practical underpinnings of today’s more comprehensive, integrated approach to sustainability.

Earth Day continued to grow as a global phenomenon, leveraging the Internet to engage 5,000 environmental groups across 184 countries in 2000. As Earth Week came to a close in 2003, BGSU’s Environmental Action Group presented a mini-conference to educate students on some simple ways to help the environment. The conference featured such diverse areas as recycling, low-impact camping, ecofeminism and the environmental effects of war.

“Within a few years, BGSU began studying the benefits of adapting an organized, dedicated institutional approach to sustainability,” said Dr. Nicholas Hennessy, who was named the University’s first sustainability coordinator. “I was brought on board in 2008 as the Office of Campus Sustainability was created to foster greater coordination and collaboration across the University and in the community.” 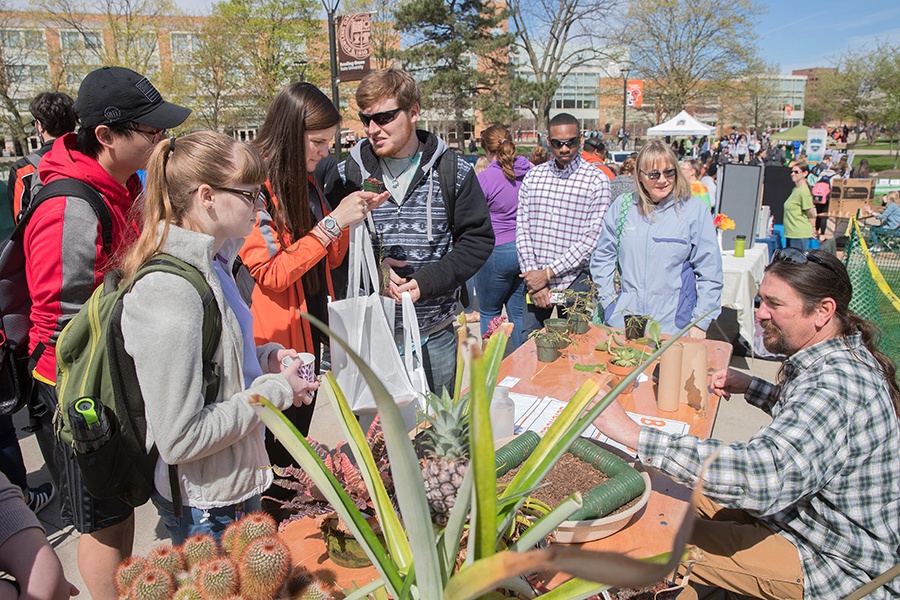 The annual Eco Fair features environment and sustainability-related organizations, as well as academic departments and programs, who are on hand to share information and opportunities to participate. This year’s event has been postponed until a later date to be determined.

Earth Day is celebrated globally by more than a billion people as a day of action to change human behavior and provoke policy changes. This year, activities have been moved to a digital mobilization due to the COVID-19 pandemic.

At BGSU, a variety of engaging and educational activities that were planned for the month of April have been postponed until a later time. Our Earth Month speaker was scheduled to be Ohio Gov. Mike DeWine, who was planning to discuss how H2Ohio — a comprehensive statewide water quality initiative — aims to reduce harmful algal blooms, improve wastewater infrastructure, create wetlands and prevent lead contamination. The Governor’s remarks were to include an emphasis on the important role of several BGSU academic programs and research areas, as well as the entire University community, in protecting the environment and Ohio’s natural resources. His visit will take place at a later date as we get past the current pandemic protocols.

The BGSU community is encouraged to visit our Earth Month page for more information on how you can make a difference in protecting the environment and contributing to a more sustainable future.

It’s not too late to participate in this year’s Earth Day Ecochallenge, which connects you to a global community of advocates and changemakers who are working to make the earth a healthier, more equitable, more sustainable place. And, you’re invited to visit earthday.org for 24 hours of action in a global digital mobilization.

Be sure to visit the Virtual Bingo page for how to participate in a variety of environmentally friendly activities, from how to make your own toothpaste and soap to submitting a Green Fund proposal.

Stay up to date with the Environmental Action Group’s (EAG) social media where they will be sharing opportunities and educational content about Earth Day. Follow the Office of Campus Sustainability’s social media @GreenBGSU on both Facebook and Twitter.

As we mark the 50th Anniversary of Earth Day, we celebrate all the progress that has been made in implementing life-changing sustainability practices and policies. At the same time, we realize that there is much left to be done to build a cleaner, safer and more sustainable future for all. And we salute the BGSU community for the courage and fortitude it has demonstrated over the past 50 years.