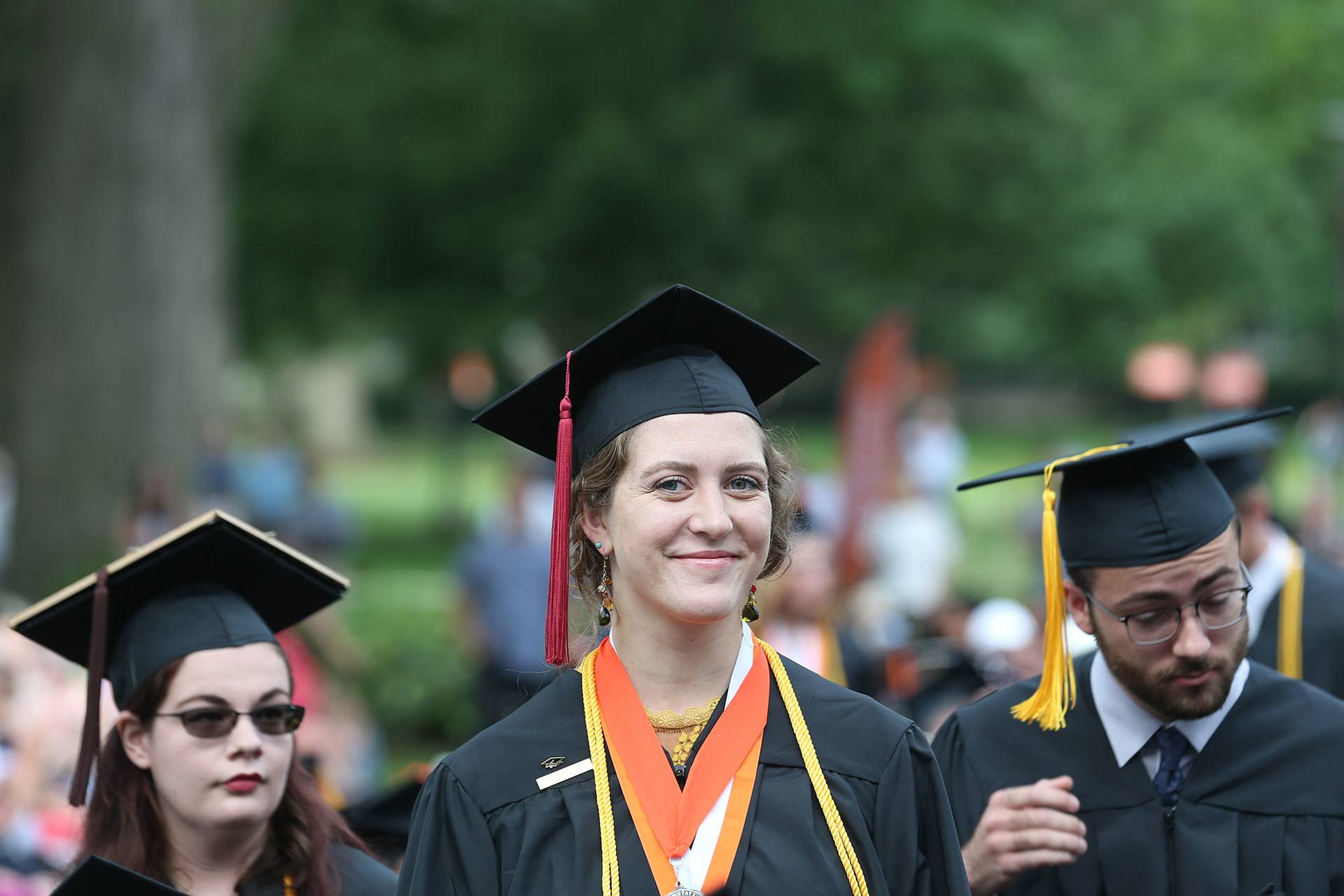 For Hannah Finnerty, journalism is the perfect career choice.

She is naturally curious and has a gift of being able to take something that may be mundane, read about it for hours and decide “this is the coolest thing,” said Finnerty, who graduated in August from Bowling Green State University with a Bachelor of Science. “Journalism provides an outlet where I can explore all things in the same career. This week, it might be photosynthesis, next week Egyptian politics. I don’t think there are very many careers where you can spend time and can learn about both of those topics.”

Her inquisitiveness also propelled her to explore many experiences beyond the classroom. From alternative spring breaks to Arabic language classes, her choices have given her a library of stories to share. 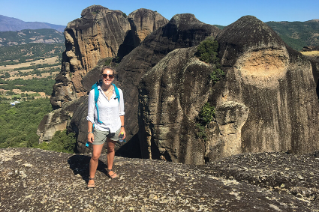 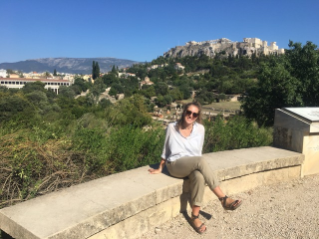 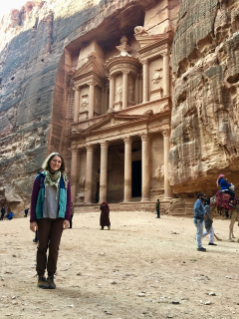 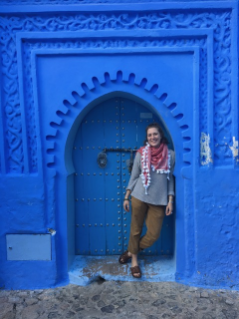 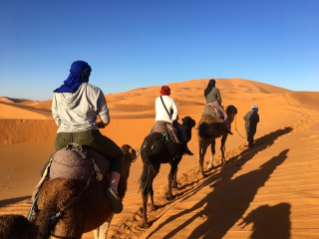 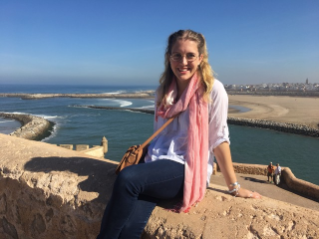 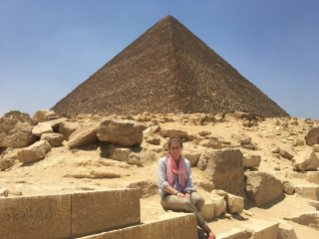 Stories have been part of her life since she was a child growing up in Waterloo, Illinois.

“I always loved writing and had so many notebooks full of short stories and half-written ambitions of a novel when I was 9. For a long time, it was like ‘Oh, I will be a novelist,’ but that’s not really how that works,’” she said with a laugh.

A high school journalism class helped her realize “this is what I want to do.” She could take her writing in a different direction and satisfy her curiosity on an encyclopedic variety of topics.

During her first week on the Bowling Green campus as a freshman Alumni Laureate Scholar, she attended a BG News meeting in the former West Hall, and her plan to become a journalist was confirmed.

She learned about journalism in classes with experienced and helpful faculty members, but she absorbed the most as a reporter, a copy editor, a city editor and finally as an editor-in-chief her junior year.

“I got all this experience and when the (Michael & Sara) Kuhlin Center opened in 2016, it was such an amazing addition to be tacked on at the end of my BG News career. Having all that technology to explore different multimedia skills allowed me to host a radio show” and develop so many skills that have been helpful in her internships and study abroad experiences, as well as in the job interview process.

“As I’m in this job process, wow, am I thankful to have been a part of student media at BGSU,” she said. “All of my BGSU experiences have been valuable.”

Finnerty, who also was a member of the Honors College, has a strong foundation in community support and service. Growing up, she sometimes accompanied her mother, a physical therapy assistant, to work, where helping others is fundamental. The family actively volunteered in the community and has remained involved with service, including helping make apple butter the old-fashioned way for an annual historical society event.

That commitment to service continued when she enrolled at BGSU. During her sophomore and junior years, she was involved with BG Alternative Breaks, including a trip she led to Richmond, Virginia, to work with refugees. She was a civic action leader in the Center for Community and Civic Engagement (now the Center for Public Impact), and dedicated time and energy to give back to the community.

“I never thought about the bigger picture of community service until I got to BGSU,” she said. The Alumni Laureate Scholarship program, which focuses on leadership, service and academics, provided a new perspective.

As a junior, she applied for the Harry S. Truman Scholarship and was one of 194 finalists nationwide and one of five finalists for the state of Illinois. She did not receive the scholarship; however, through the application process, she met other young professionals inspiring and changing their communities through public service. For her dedication to leadership and commitment to service, she also received the Ray C. Marvin Leadership Award, established in 2019 by BGSU alumnus Ray Marvin ’60.

“That is when I realized that commitment to public service and giving back is going to be an integral part of my life,” she said. “I think about it all the time.

“I’ve been doing those things all along, with my involvement as an Alumni Laureate Scholar and as a civic action leader. What surprised me was that I hadn’t really connected that all along.

“I see journalism as a way to give back to my community. One of the greatest things we as a society can have is factual information to keep us informed. I want to serve the community the best way I can, which is through my words.”

In addition to giving back through writing, Finnerty decided to do more when it came to an interest in refugee issues, a passion she stumbled upon while writing one of her first articles as a student journalist. She was introduced to the refugee community in Toledo through a local agency, Us Together. Connecting with several people involved with refugee resettlement organizations sparked a fascination with the Middle East.

She enrolled in an Arabic class to fill “a gap in my world map,” she said. “I had always been interested in the Middle East, but in my public school system, we didn’t talk about it outside the context of the world wars.

“I wanted to figure out what was there.”

Her BGSU Arabic instructor Badredine Idrissi-Mojib, who was from Morocco, shared the language and culture with students through immersion in music and trips to an Arabic-style bakery, a traditional Yemeni restaurant and the Arab American National Museum. The lessons fueled her fascination with the Middle East and her interest in the plight of refugees.

“Refugee issues have kind of been the common thread running through my college experience,” she said.

Finnerty applied for and was awarded a Stuart R. Givens Memorial Fellowship, established by BGSU retirees Christopher and Ellen Dalton, in memory of Givens, an emeritus professor of history. The fellowship that supports students pursuing an interest to make a demonstrable difference in their lives, provided Finnerty the perfect opportunity to go beyond the books and documentaries that shaped her early ideas about the Middle East and refugees.

As a Givens Fellow, she traveled to Egypt and Greece during summer 2017 with a plan to use journalism to help refugees by telling their stories. She worked with Saint Andrew’s Refugee Services in Cairo in their unaccompanied youth and children department, meeting with refugees from Somalia, Ethiopia, South Sudan and Eritrea. While there, she spent time with 8- to 18-year old children who didn’t know if their families were alive; she befriended a refugee whose father had been tortured for preaching Christianity, and whose dream it was to become an architect.

In Athens, she worked with Hellas Caritas in a soup kitchen serving hot meals to refugees from Syria, Yemen, Iraq and Afghanistan. In Greece, she shared lunch with a group of sea-worn fishermen whose stories were “soaked in exaggeration and splendor,” but not as extreme as “the strange and garish fish they pulled from their bags of their morning catch.”

Her goal of sharing the stories of the people she met had to be abandoned. When she arrived at her first stop in Cairo, she learned the agencies didn’t allow interviews of the refugees, primarily because of safety and security issues. The people were willing to talk, but they were afraid if their stories were told their immigration status might be jeopardized.

In the end, “I wasn’t successful in how I pitched my plan, but it was successful in what I learned from it,” she said. There was not one single experience that shaped her; instead the people she met and the opportunities she was given were the most powerful and influential parts of her trip.

During her last year of college, she studied with International Studies Abroad exploring courses in Middle Eastern studies, Arabic, politics and governance in the Middle East, and women and religion and gender studies in the Arab world.

She then utilized the interviewing skills she gained meeting with the refugees and through student media and put them to work in a Middle Eastern newsroom when she worked during summer 2019 for The National, an Emirate royal-owned newspaper in Abu Dhabi. Her Abu Dhabi experience was possible thanks to the Hoskins Global Scholars Program, generously established by BGSU alumnus Michael Hoskins ‘77 to support immersive academic experiences for students who are studying or doing internships abroad.

It is a one-of-a-kind program that allows students to realize their dreams on an international level. Each year, the Hoskins Global Scholars Program provides ﬁnancial support in the amount of $5,000 for up to three selected students to participate in an international experience. These funds can be used to enhance the experience in their area of interest and stretch their boundaries with a creative pursuit, independent study, internship or service project.

Because of the scholarship, she increased her newsroom knowledge and her journalism skills in an international setting.

“It wasn’t government owned, but we had our fair share of roadblocks with topics we couldn’t cover or certain countries we shouldn’t criticize,” she said.

One of her internship responsibilities was podcast production, which she continues to work on for The National. For that she thanks the experiences she gained as a multiplatform student journalist and a radio show host in the Kuhlin Center. “That’s where my interest in audio journalism paid off,” she said.

Another recurring theme in her collegiate career is the impact alumni and donor support has had on her experiences.

She might not have considered BGSU if it weren’t for the Alumni Laureate Scholarship program.

"I was able to attend BGSU because someone was giving back to the University, someone who wanted to help another future Falcon by giving back,” Finnerty said.

“A lot of what I’ve been able to do has been because of people’s generosity and commitment to giving back," she said. “I’m so indebted to the alumni of BGSU who care about future students. Because of their donations and their consideration for us, I was able to attend BGSU, go to Egypt and Greece, work with refugees for two months and go to Morocco for nine months to learn a language, study a culture that I am crazy-passionate about and intern in an Abu Dhabi newsroom. So many things were possible because of alumni and friends.

“I’ve also always had the support of family and friends,” she said, including her boyfriend, Philip Rich, and his parents, Greg and Linda, who are both BGSU faculty members.

“Scholarships big and small have made such a difference for me," Finnerty said. “I hope that I will be able to donate and give back to impact students’ lives in the same way that current donors have impacted mine.”