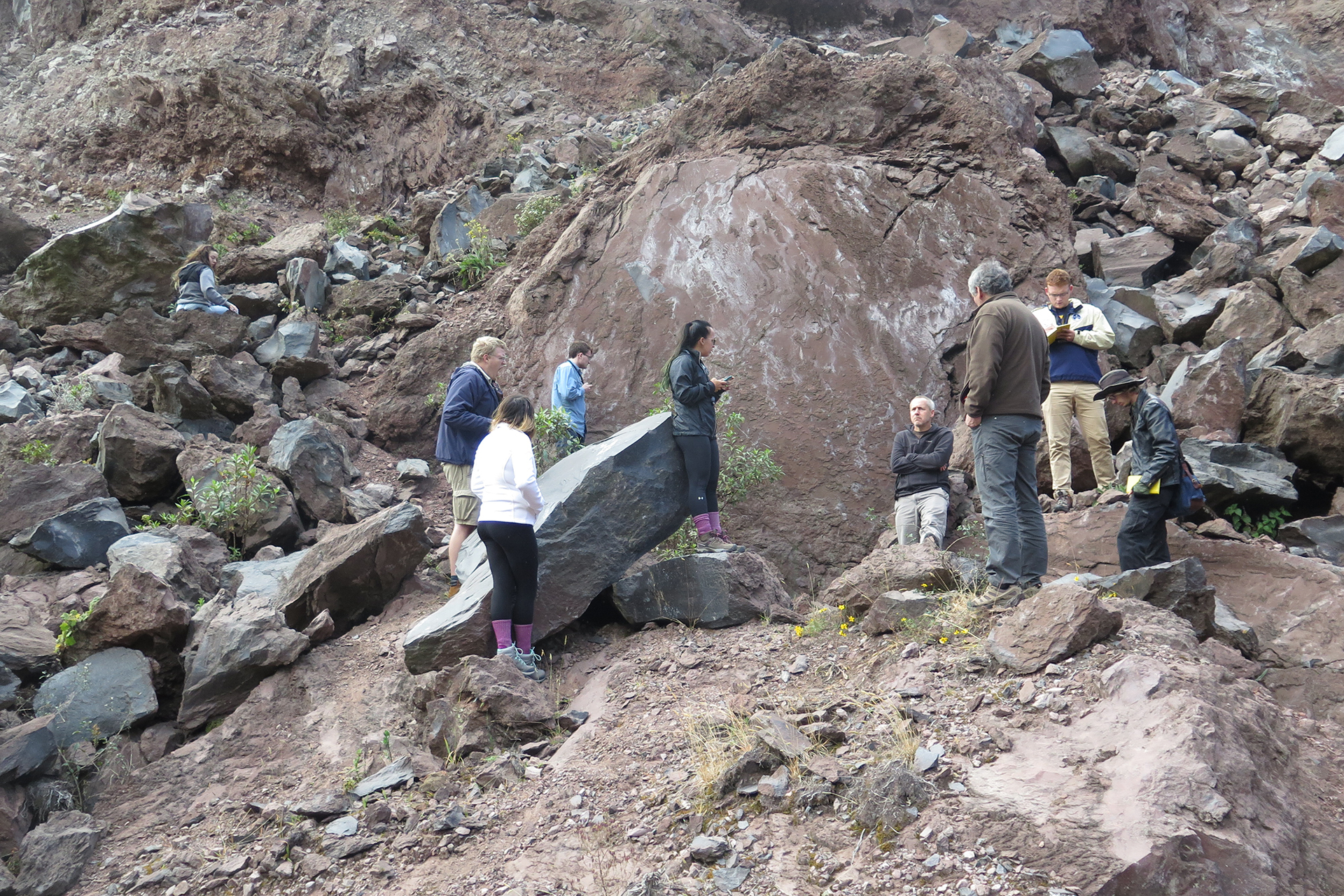 In the footsteps of Darwin 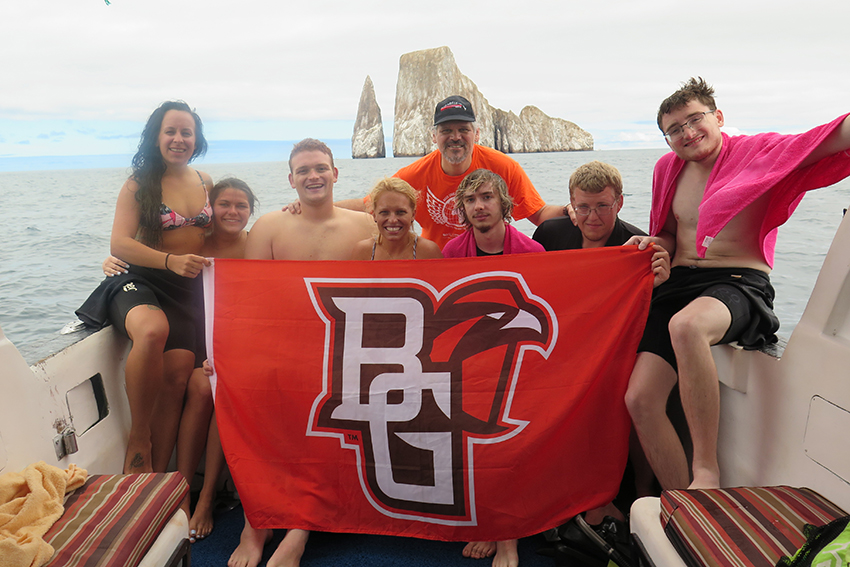 Traveling by plane, boat, van, on foot and even underwater, a group of Bowling Green State University students and faculty explored the geological and biological wonders of Ecuador’s equatorial Andes and Galápagos Islands this summer. From cloud forest to desert to ocean, they traced the natural and human impact on the environment and followed in the footsteps of Charles Darwin through this most fascinating part of the world.

They experienced hummingbirds alighting on their hands and stood aside to make way for a giant Galápagos tortoise lumbering down a path. They saw sea turtles and schools of sharks swimming beneath them as they snorkeled, watched a blue-footed booby fend off a Galápagos hawk trying to attack her chick, and climbed on rocky slopes formed by volcanoes.

The diverse group of students and faculty brought equally diverse perspectives to the experience. Led by Dr. Juan Bouzat, a professor of biology and Dr. Jeffrey Snyder, an associate professor of geology and director of the School of Earth, Environment and Society, the eight students came from BGSU Firelands and Bowling Green and another from the University of New York at Rochester. Their majors included biology, geology, psychology, economics, travel and tourism and pre-engineering, and the participants themselves ranged from a College Credit Plus student from Firelands  to a BGSU August graduate.

“It was a great team-up of Firelands and BG,” Bouzat said.

With their yellow field note books always in hand and often with magnifying glasses around their necks, the students observed and learned about their surroundings as they moved from one distinctive biome of the country to the next. 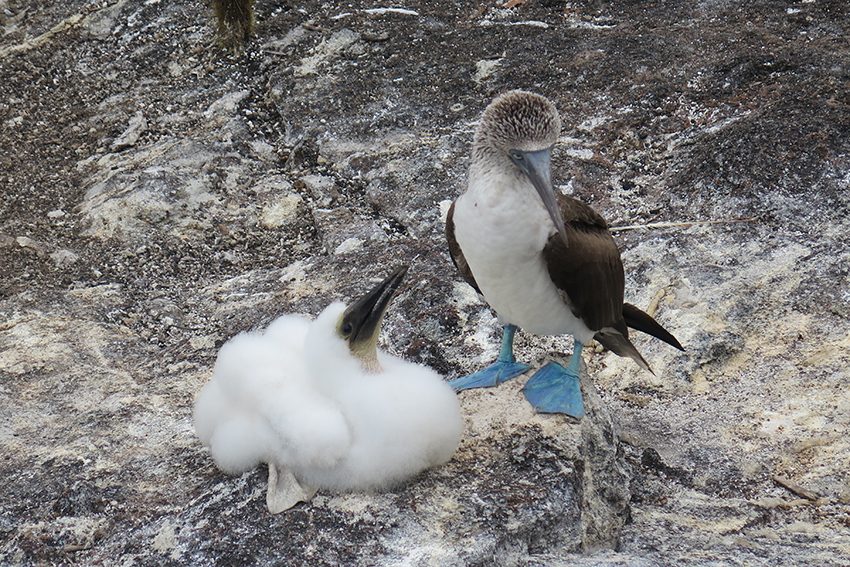 “We looked at biodiversity, volcanology, island formation and evolution. It’s the perfect place for an integrative learning experience,” said Bouzat, who organized the trip. A specialist in evolutionary and conservation genetics, he has written on Darwin’s theories and studied South America’s Magellanic and Galápagos penguins and other bird species.

Although Darwin is most widely known for his theory of evolution and the origin of species, “he made many important contributions to the science of geology from his observations on the famed Beagle voyage,” Snyder said. Combining the two disciplines of biology and geology in the education abroad experience provided students a deeper understanding of how biology is influenced by the environment.

“It definitely broadened my horizon on how the geology is interacting with the biology,” said geology major Paul Dress, a sophomore from Port Clinton who went for the opportunity to see firsthand Ecuador’s various types of volcanic rock and its many active volcanos.

“There’s not really anything like that here in the United States,” he said. But his up-close encounters with the animal and marine life proved almost equally amazing, as when he came face to face first with an octopus and then a large eel while snorkeling, and learned that the blue-footed booby gains its signature foot hue from elements in its diet.

“That’s why the darker the blue of the males’ feet, the more attracted the females are to them,” he said. “It shows they’re capable of getting more food.”

“The whole idea of the survival of the fittest — the Galápagos is where it all happened,” said Isaac Rogers, a junior from Bowling Green. “Being in the place that caused Darwin to have that thought was incredible.”

Firelands junior Kaitlyn Gorsuch, a biology major from Berlin Heights, Ohio, said seeing “how the biology had to adapt to the unique geology and the landscape of the country was so interesting, and even how different the areas and even the islands were from each other — and from home. I’ve taken geology classes and lots of biology classes, but you can only learn so much from pictures. Being there was almost overwhelming.”

Gorsuch and Firelands College Credit Plus student Maggie Love received financial support for the education abroad experience from the Geotrac Charitable Foundation. Founded by alumnus Daniel White of Norwalk, Geotrac’s mission is to “expand the worldview of our community by bringing the world to Norwalk and sending Norwalk to the world.”

Gorsuch and Love were invited by White to share their experience with the Geotrac board in a presentation during its October meeting.

Beyond the specific facts the group learned, “realizing that science is fluid and we don’t have all the answers, grasping that ideas are ever-changing, gave me a way better understanding of science and how, as Socrates said, if you keep asking questions you will keep expanding your knowledge,” said Rogers, an Honors student whose academic major is behavioral economics.

The country of Ecuador is a land of volcanos, and the group visited a spectrum of types, Snyder said. Those in the Andes are different from those in the Galápagos, which come from a “hot spot” under the shifting oceanic plate. The students could see the differences between the older and the more recent (in geologic time) islands by observing the landscape.

In addition to the hand lenses all the students were given, Dress had brought his rock hammer and magnet along to help identify the mineral composition of the rocks from various sites.

“I could usually be found with my nose in the dirt,” he said. He was able to bring back samples from some of the volcanic areas (although not from the Galápagos, where taking anything is forbidden) and plans to analyze their contents in the BGSU geology lab.

When certain of these volcanos erupt, their tops collapse in, forming calderas, or large, bowl-like structures. The BGSU group got an up-close look at a fairly recent eruption and its caldera when they visited the Sierra Negra on the island of Isabela. They surveyed a broad, sunken plain of black lava where plant life has yet to re-emerge.

This was a great contrast to the lush cloud forest they visited on outings from the capital city of Quito, where they began their stay in Ecuador. Because of the great altitude and humidity there, where clouds come down and lay their mist over the landscape, plants grow to enormous size.

That was also where they saw the bright yellow-billed Choco toucan and got a rare glimpse of a spectacled bear, the only bear native to South America. “That was really exciting,” Bouzat said.

They got an introduction to the unique geography of the earthquake- and volcano-prone region at the start of their trip in Quito, where they visited the Geophysical Institute and observed the continuous monitoring of volcanic activity that goes on around the country.

The group also got a cultural immersion in the indigenous and colonial history of Quito, a World Heritage Site, and saw how a culture has thrived despite its challenging high-altitude location amid steep hills and ravines, all in view of the surrounding volcanoes. In fact, today Quito is experiencing a wave of immigration from Spain, where the economic situation is declining, Rogers said.

The city reflects both its indigenous roots and the influence of the Spanish colonists. The BGSU group saw the manifestation of colonialism in grand churches where there were different doors for the Spanish, the indigenous people and enslaved people.

“The cathedral was magnificent and all the colonial buildings were so impressive, spectacle-wise, but it was important to know it was the indigenous people who actually did all this,” Rogers said.

Alyssa Lombardy, a senior from Sandusky majoring in psychology, said being in Quito pointed up “the same societal issues that we focus on today. It’s interesting to see where that crossover with our own history happened and how history repeats itself.”

For Rogers, the interaction with local people was the most impactful, as when he spoke with a Spanish immigrant at the airport, and when he, other students and Bouzat cheered on and then joined in a late-night soccer game on Isabela.

Lombardy, who plans to study industrial/organizational psychology in graduate school, also valued the conversations she had with people the group met along the way, “hearing other people’s stories, learning about different work structures and mentalities, individualist versus collectivist cultures. It really expanded my world view and made me feel empowered to do more traveling on my own.”

Lombardy is interested in all facets of science. “I’m fascinated by the application of psychological principles to the process of evolution, and by the intersection of biology and geology as they relate to the genetic and social components of human development,” she said. “You need an understanding of both those disciplines to get the whole picture and the full story.”

In addition to all the scientific knowledge gained by the students, the expanded world view they gained was the goal of Geotrac founder White, who quoted Mark Twain:

“In ‘Innocents Abroad’ he wrote, ‘Travel is fatal to prejudice, bigotry, and narrow-mindedness, and many of our people need it sorely on these accounts. Broad, wholesome, charitable views of men and things cannot be acquired by vegetating in one little corner of the earth all one's lifetime.’

“Mark Twain's words resonate with as much truth today as they did over 100 years ago,” White said.