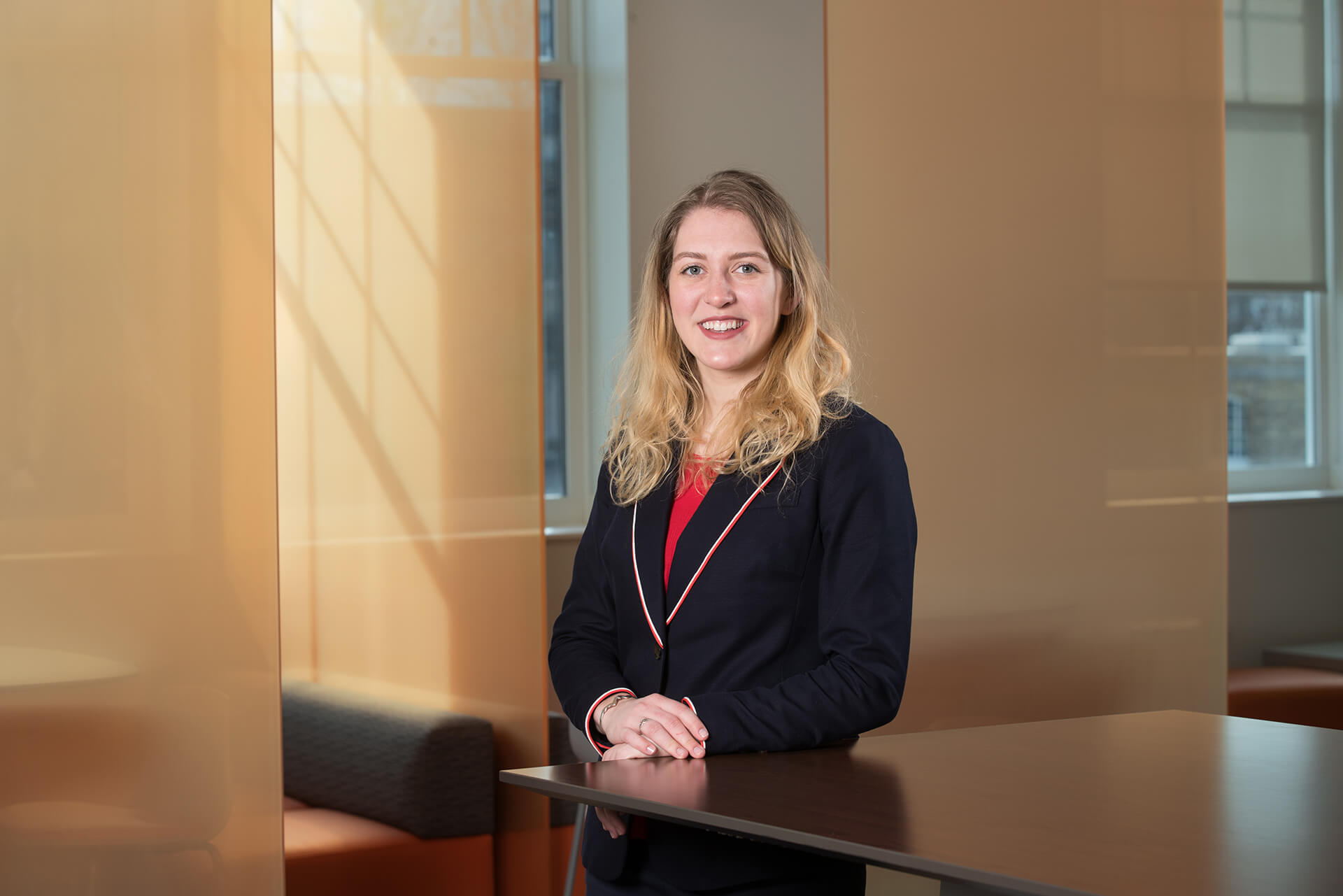 In pursuit of public service

Journalists often choose their profession because they love writing, and the same is true for Bowling Green State University junior Hannah Finnerty. But the BG News editor also sees journalism as an opportunity for public service.

By merging her talents and interests, the Waterloo, Illinois, native created a public policy proposal that resulted in her being named one of 194 finalists for the 2018 Truman Scholarship, the premier graduate fellowship for students pursing careers as public service leaders. On April 20, she will find out if she’ll receive this prestigious scholarship from the Truman Foundation, a living memorial to the country’s 33rd president.

“I always liked writing,” said Finnerty, who took one journalism/yearbook/newspaper class in high school. “Through the class, I realized I could actually write for a living and give back to the community.”

Giving back to the community is important to Finnerty, who serves as a civic action leader in the Center for Community and Civic Engagement, which creates connections between service organizations and BGSU faculty and students to support service to the public good.

She also led a spring 2017 BG Alternative Breaks trip to Richmond, Virginia, to work with refugees and wrote a BG News article about a refugee resettlement agency in Toledo called Us Together.

"I want to serve the community the best way I can, which is through my words."

“Refugee issues have kind of been the common thread running through my college experience,” she said, adding that she has since volunteered with the organization. “I realized I don’t just have to write about the refugees, I can go work with them.”

In summer 2017, Finnerty worked with refugees in Egypt and Greece, thanks to the Stuart R. Givens Memorial Fellowship, which supports students pursuing an interest in a manner not otherwise possible. It is expected that the experience will make a demonstrable difference in recipients’ lives and help them grow both personally and intellectually.

“It was eye opening,” Finnerty said. “You hear stories about how bad conditions are for refugees, but we’re so far removed. I spent time with 8- to 18-year-old kids from Somalia and Sudan who didn’t know where their parents were or if they were alive. It furthered my desire to work with refugees and use journalism as a tool to help them.

“Journalism is like the propeller on a boat, moving things that would have previously been in the dark to the forefront. From there, the community can engage in discussion and change can happen. On a local level, we can make the community aware of opportunities to serve their community.”

Next school year, from August to May, she will work on her interdisciplinary minor in Meknes, Morocco, exploring courses like Middle Eastern studies, Arabic, politics and governance in the Middle East, and women and gender studies in an Arab world.

Finnerty combined her interests in refugee issues and writing into a public policy proposal focusing on the use of advocacy journalism as a tool to assist refugees settling in the United States. The proposal, along with an extensive application and essays, resulted in Finnerty being named a finalist for the Truman Scholarship.

Earlier this month, she advanced to the interview portion of the process, which included an intensive, 20-minute interview with a panel of nine interviewers, including President Truman’s grandson and Steven Cohen, who financed “Icarus,” which won the 2018 Oscar for best documentary. As an Illinois native, Finnerty is one of five finalists competing from that state.

“I was nervous the entire day, but I felt comfortable once I got in the room,” she said. “The questions were tough; they want you to demonstrate that you know what you’re talking about, that this is what you’re going to do with your life.”

"Getting to know Hannah better as her academic advisor in the Honors College and this past year as her ALS advisor, I’m just so proud that she was chosen to interview for the Truman Scholarship," Snyder said. "Her passion for public service and journalism, and the incredible experiences she’s had in her time at BGSU, and her passion and personality make her an ideal candidate. When I found out she was chosen as one of the finalists from the original pool of over 750 candidates, I was so excited, but I wasn’t at all surprised. She’s an incredible representative of BGSU and the type of person the Truman Scholarship is made for."

Finnerty had never heard of BGSU before it came up as her 100 percent match in a college survey. This is a match the Alumni Laureate Scholar said is still true today.

“As I toured other colleges, I realized I really, really liked BGSU – and I still do,” she said. “The first thing I did on campus was go to a Sunday night BG News meeting in West Hall. Three years later, and the BG News is my family.”

Although she wasn’t originally sure if she’d like being in an editorial role, Finnerty said she likes getting to know the reporters and watching them develop as writers.

“I want to serve the community the best way I can, which is through my words,” she said. “I encourage my reporters to do that as well.

“The way I see journalism is as a community service. I want to serve people with information they need to become active and influential people in their communities.”