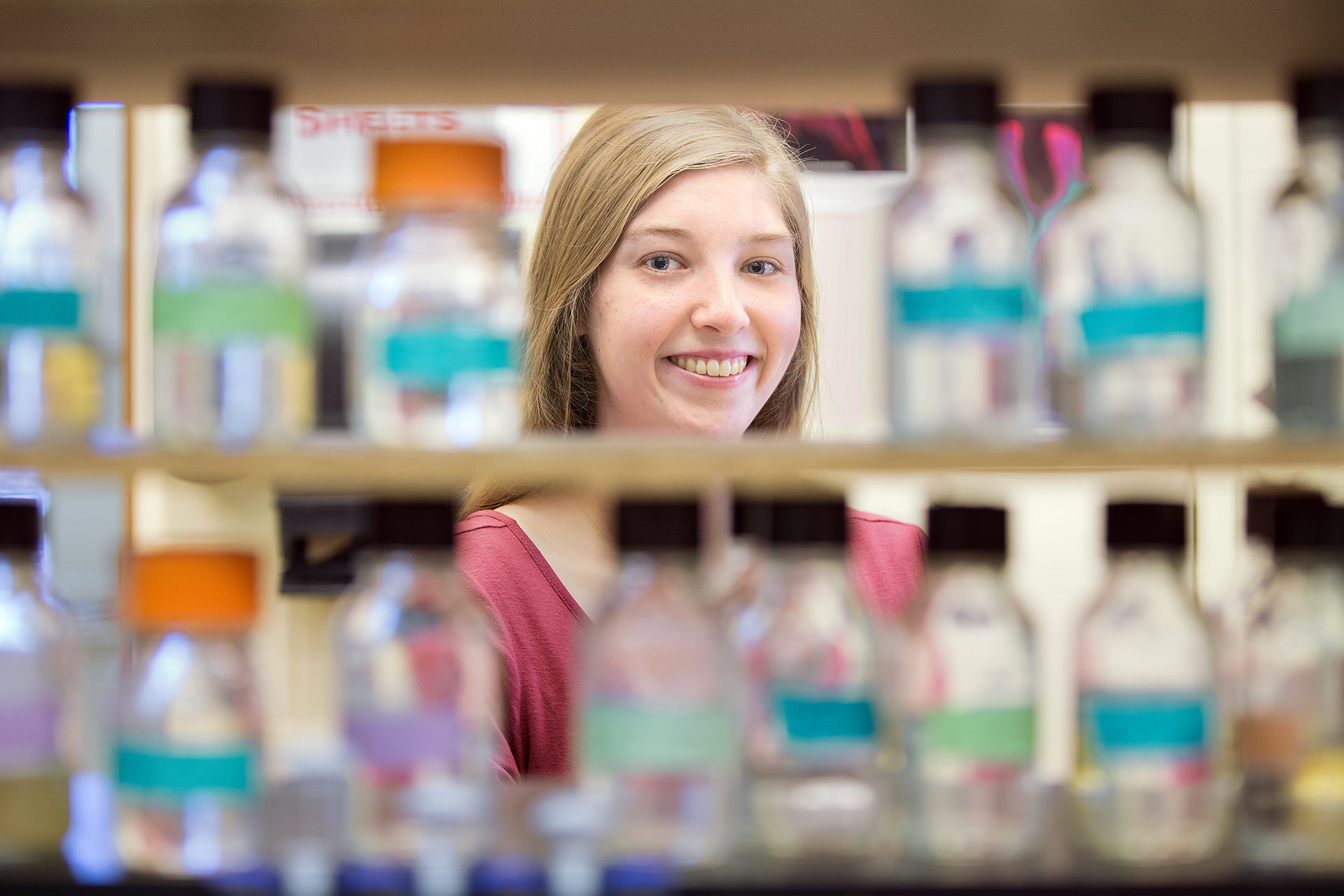 Erica Eskins thinks the Giardia parasite is cute and the corkscrew look of the syphilis spirochete is fascinating - all that from a girl who was born and raised in Bellevue, a small Ohio town.

What started as a general interest in science as an elementary student turned into a passion, and now a career path for Eskins, who is a December 2017 graduate from Bowling Green State University's College of Arts and Sciences and Honors College. She revels in the fact she is a science nerd, and claims she always has had that tendency.

"I always associated with academics and reading," she said about her younger years. "To me, learning is fun."

Her science interests intensified in high school when she was named student manager for the school's marine lab, and continued into her freshman year at BGSU when she was involved in the Academic Interest in Mathematics and Science (AIMS) program and soon found her way to microbiology.

Eskins was one of the 2014 Presidential Scholars, receiving a renewable in-state tuition scholarship, as well as one of the top five Forsyth Scholarship winners, for a renewable, full-fee scholarship. Though she chose BGSU for practical reasons - the financial support and the proximity to Bellevue - she admits the experiences have done more for her than she could have ever predicted.

Through courses and undergraduate research, she has pinpointed her career goals and gained valuable experiences.

She found her way to a lab right away her first semester. She landed in the Herpetology Lab caring for the army of Poison Dart Frogs. Under the "amazing guidance" of Dr. Eileen Underwood, Eskins turned her herpetology experience into her own research, studying how to maximize the breeding of Lemur Leaf frogs.

From there, she added work in the scanning electron microscope lab with Dr. Carol Heckman. Eskins was proud for learning to work those monster machines, but she also learned that studying cells at that level did not interest her.

"I think all of the research I did helped me narrow down what aspect of biology I was most interested in," Eskins said. "The cell biology was too small, and the animal biology was interesting, but not what I wanted."

She also worked with Dr. Dan Pavuk on a grant-funded project to collect mosquitoes in Wood County for West Nile Virus testing. Working with Pavuk was another positive learning experience that gave her the opportunity to try fieldwork, but then cross that off her list as well.

"Even though microbiology looks at a small level, this path will allow me to study how small organisms affect whole populations.

"I am fascinated how single-celled organisms function completely and wholly, but they also interact as a community and communicate with each other," she said, "It is amazing how that happens."

Making a difference in people's lives through science has always been in her plan, but she knew early on that being a doctor wasn't the right fit for her. "When I realized the impact public health could have on just about every aspect of someone's life, I knew I wanted to pursue public health."

She was involved in the Small World Initiative at BGSU, led by Wildschutte, looking for new antibiotics through antibiotic resistance research.

"We were finding bacteria that was similar to bacteria in other countries," she explained. "Seeing how closely related bacteria can be found on entirely different continents helps me understand the importance of international collaboration of the scientific community in solving this issue."

Her final honors project was studying the microbial community of the axolotl, an increasingly common pet. Eskins wanted to look at antibiotic resistance in a unique environment as well as to look at the potential public health implications of more people interacting with these animals in their households.

Eskins stressed how important the work in research labs was for her development. The research also provided that gut-wrenching, but valuable, experience of presenting her research findings at conferences and symposia. "I learned pretty quickly that the more passionate I am about my subject, the easier it is talking in front of an audience."

In addition to having the opportunity to work in various faculty members' labs, Eskins also received substantial support through the Center for Undergraduate Research and Scholarship (CURS).

Following graduation, Eskins will continue her education. In May, she starts at the University of Cincinnati in their epidemiology program, working toward a Masters of Public Health Degree in epidemiology, with her eye on a job with the Centers for Disease Control and Prevention and eventually a doctoral degree.

She valued her BGSU education, doing additional research on post-consumer composting with the dining halls, serving as a Falcon Internship Guarantee ambassador and studying abroad in Australia and Fiji this past summer with her sister, Elaina, a sophomore Communication Disorders major. Everything Eskins did during her time at BGSU, provided a broader sense of the world, which she plans to use to impact as many lives as possible, hopefully one day taking her career in public health internationally.