‘Reflect on your experiences’ 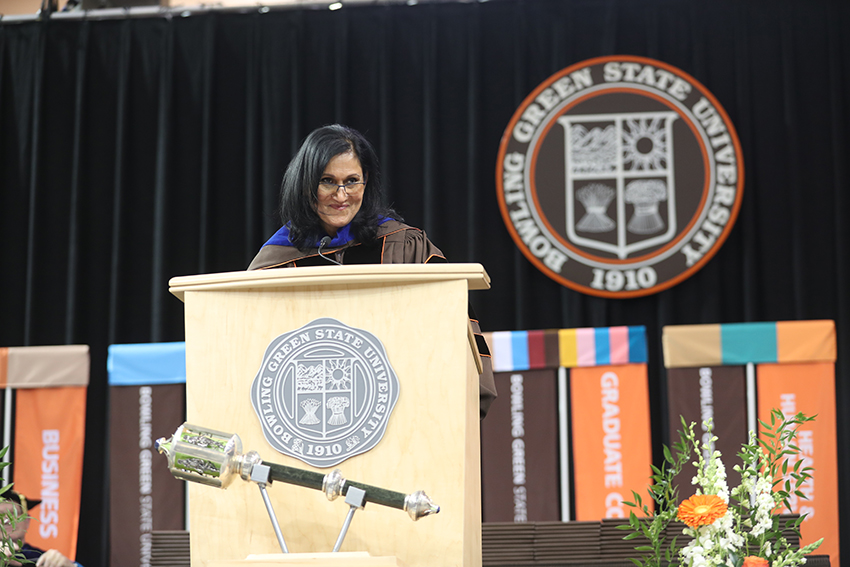 Being back on the Bowling Green State University campus was like watching a sepia-toned film of a sliver of her life, said Friday’s commencement speaker Vandana Pednekar-Magal. The alumna recalled working on a research paper in the computer lab at 2 a.m.; walking to her apartment from a class in West Hall; battling the Bowling Green weather; and hanging out with friends and classmates at Uptown. Many memories the graduates of the University’s fall class could relate to.

“I was there where you are now,” she said. Pednekar-Magal earned her master’s degree in interpersonal communication and doctoral degree in communication studies from BGSU in 1989 and 2000, respectively. She is now a professor of journalism and media communication at Grand Valley State University in Michigan.

Pednekar-Magal left a life in Bombay – a job, friends and family – to become a graduate student. Despite all she left behind, and the challenges of life in a new country, she found a home.

“[There were] certainly a plethora of enriching, rewarding, gratifying intellectual experiences,” she said. “Great times working, interacting with a diverse group of students and faculty who came to BGSU … from across the world.

“What would life be without those experiences, of loss and yet gaining so much more; of transitioning from known circles of family and friends to making new family, friends and community.”

Pednekar-Magal told graduates they were at the cusp of a transition, ready to embark upon a new crossing “toward responsibilities, to not only yourself, but responsibilities toward a profession, toward new colleagues, toward family that you perhaps have already begun or will soon begin, toward children.”

As their predecessor on this voyage, she offered a few suggestions.

She also encouraged graduates to take the lows – failures, occasions of not living up to expectations – and remember that they eventually got the results they wanted because they worked harder, better, in the face of failure. They also learned the value of friendship and to cultivate empathy toward fellow humans.

“In your life, you will be called upon to respond to situations that are created outside of your control or influence and yet those situations will deeply affect your life,” she said. “Your intellectual pursuits, your diligence, your academic work in college, has equipped you with ways of knowing, of making sense of happenings in the world in much more imaginative ways, in free-thinking ways.

“Your response to the world, in individual modes or in collective action – the way you vote, the reasons you protest for, the particular social cause you care about and will fight for, the knowledge you will create, the art you make, the spaces you will design – will make a difference in the world.”

Finally, Pednekar-Magal encouraged graduates to remember that they will make this life beautiful, for themselves and the people around them.

Pednekar-Magal has served as the director of GVSU’s School of Communications, which houses six academic programs, including a master’s program with 1,600 students and 40 full-time faculty.

Her work spans and connects many fields of study. Her published work includes scholarly journal articles on the subjects of electronic surveillance, transnational media, globalism and nationalism, and liberal education. She has produced two documentary films that were aired on the PBS/WGVU channel in Grand Rapids; one of her films won West Michigan’s Eclipse award for Best Writing.

Pednekar-Magal grew up in Mumbai, India. Prior to her life in the United States, she worked as a reporter and feature writer for The Economic Times, a prominent south Asia financial daily. She has published articles in magazines and newspapers, including The Times of India and The Toledo Blade.

She serves on the Advisory Board of Grand Valley State University’s Shakespeare Festival and the University’s Civil Discourse initiative.