Letting her voice be heard 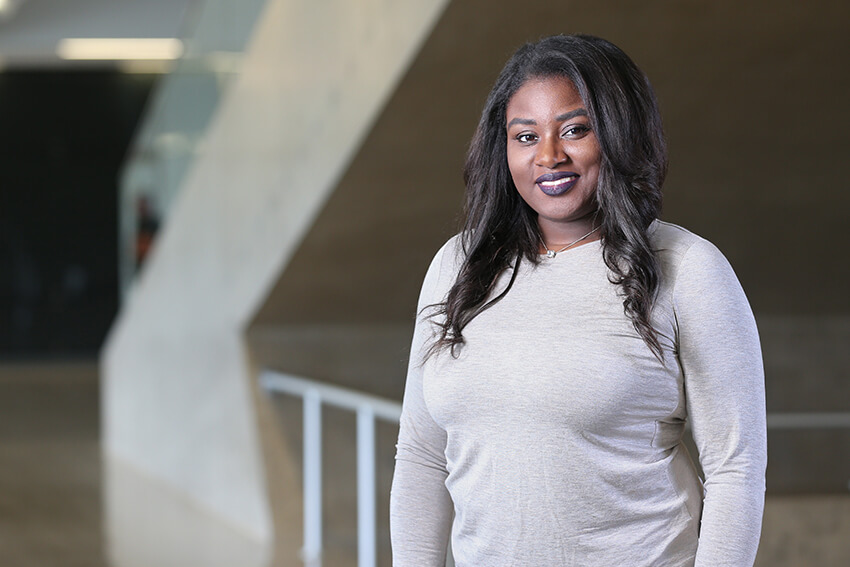 In 11 days, senior Anna Sakairoun and members of the Voices at BGSU Concert Choir will start their five-day winter tour in Atlanta. As president of the organization, Sakairoun helped plan the tour, which aligns with the mission of the group: to spread the culture and history of spiritual music in a joyful manner through hard work, discipline and collaboration.

“With this tour, we hope to draw audiences from various communities,” the political science major said. “After all, music is said to be a universal language.”

Founded in 2013, Voices at BGSU includes a concert choir, a ladies’ ensemble and a men’s ensemble. They perform a variety of songs with an emphasis on Negro spirituals. The choir is open to all majors and consists of 40-50 members each semester. Sakairoun, who sang in a church choir, has also been treasurer and music librarian for the group.

“I always wanted to sing in a college choir,” she said. “I was referred to Voices and have been in the group all four years.”

Sakairoun, who is originally from Cleveland, came to Bowling Green State University partially because two of her cousins went here.

“It was comforting having them nearby if I needed something familiar, but I found my own group pretty quickly,” she said.

Her other activities include being an Undergraduate Student Government member at large and a member of the campus NAACP. She is also a McNair Scholar and a resident adviser.

Originally a criminal justice student, Sakairoun switched to political science after realizing she was more interested in the political side of the field than the criminal side. She attributes that in part to instructor Tim Newman.

“I liked how he presented issues,” she said. “He made me feel passionate about getting into government.”

In 2016, Sakairoun was a fellow on Hillary Clinton’s campaign, an experience she calls fulfilling.

“It was a valuable experience,” she said. “I learned a lot and know I personally did the best I could.”

Sakairoun is not sure whether politics is in her future, but she does want to work in government – and get her master’s degree and law degree.

“Several of my family members have advanced degrees,” she said. “It’s a natural course of action. I’m passionate about getting minorities, marginalized groups, to understand the power of their vote.”

Sakairoun said she likes the environment at BGSU, and says being a member of Voices is the most impactful experience of her college career.

The group participates in competitions and tours throughout the year. The upcoming tour in Atlanta is a Falcon Funded project and is currently accepting financial support. In addition to singing, the group will be participating in several community service activities, and hopes to learn about the rich and vibrant culture of the Atlanta area, including local music history.