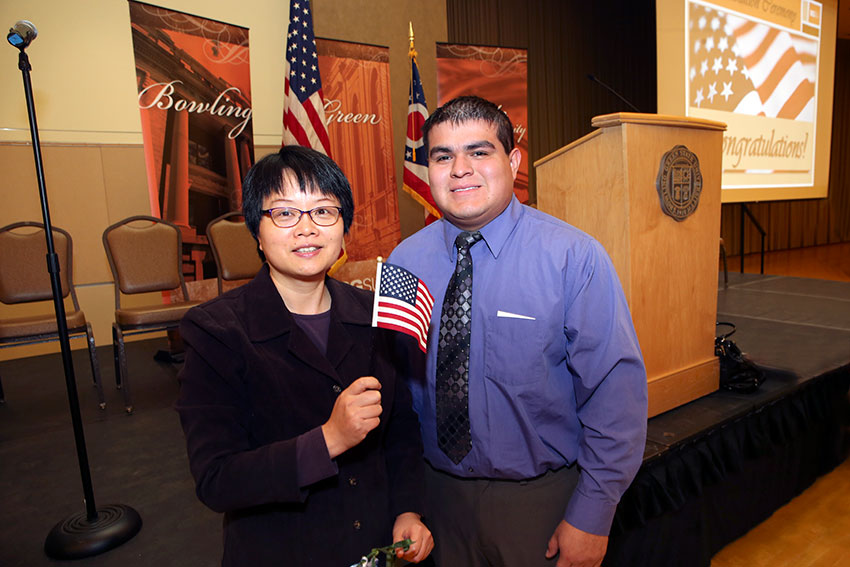 The 34 people from 20 countries becoming American citizens Nov. 13 heard from someone who knew well what they had gone through to get there and how they might be feeling.

Danijela Tomic, head BGSU women’s volleyball coach since 2012, had just become a U.S. citizen herself — “57 days ago” — she told the group assembled in the Lenhart Grand Ballroom at the Bowen-Thompson Student Union for the naturalization ceremony hosted by Bowling Green State University and coordinated by International Programs and Partnerships.

Tomic came to the United States 22 years ago from Bosnia and Herzegovina (the former Yugoslavia) knowing not a word of English. She had been playing volleyball in Croatia, but after the 1990 civil war broke out, she and her family found themselves stranded in four different countries and prospects were slim for the future. She took the surprising and brave step of applying to coach volleyball in Little Rock, Arkansas, and was accepted.

She told the new citizens that they now probably know more about the United States than most native-born citizens because of the serious amount of studying they had to have done to pass the citizenship test. She also knew the tremendous anxiety they faced as they met with their interviewer and answered the questions that would help determine their fate. Finally reaching the day when they were to take the final step was a highly emotional moment, she said.

“Immigrants don’t take for things for granted, like the value of democracy, freedom and the right to vote,” Tomic said, adding she had just voted for the first time on Nov. 7.

Among the new citizens was BGSU student Dr. Ping Liu, who came to the U.S. 16 years ago from Guangzhou, China. “This is a great day,” she said. “I’ve been looking forward to this day or a long time. And it’s great that the ceremony is here.”

Liu is enrolled in BGSU’s professional MBA program. She received her Ph.D. in chemistry with a specialization in material science from Michigan State University. Now a development engineer with First Solar in Toledo, she decided to pursue her MBA, having realized, when she was previously a project manager at Owens-Illinois, that the business degree would be very helpful in her work.

“To pursue higher education is what brought me here from China,” she said. “The United States has the best graduate education in the world. There’s a lot of opportunity in this country, and the universities are open to international students.

“The beauty of the United States is its openness and the opportunities here, which is why it attracts a lot of people from other places.

“I hope they keep it open. We’re seeing different voices and concerns now, but I believe in this country and I want to be a citizen and have a voice. Democracy has its ups and downs, but I hope we’ll come through this difficult time. The American Dream is still here.”

Lioi, who said she is the daughter and granddaughter of immigrants, administered the oath of allegiance to the incoming citizens.

“You are now citizens of a nation with a proud and unique heritage,” she told them afterwards, noting that the Constitution is a “document of brilliance in its simplicity.” The phrase “we the people” connotes that the rights belong to the people and the rule of law is paramount.

“You stand equal to all other citizens,” she told the group. “It is the uniqueness that you bring, and that other immigrants have brought, to this great country that makes our country strong.”