'Keep Your Airspeed Up' 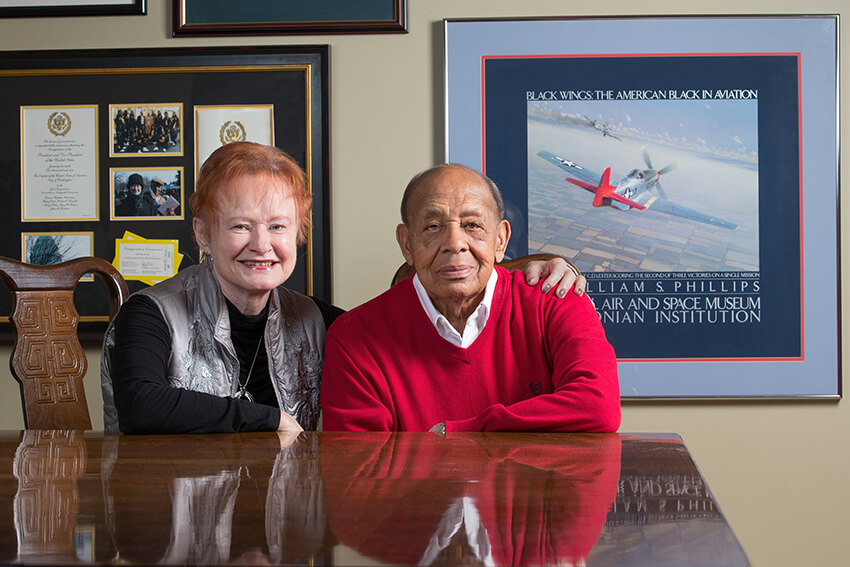 Dr. Marsha Bordner has captured the remarkable career of her husband, Harold Brown, in “Keep Your Airspeed Up: The Story of a Tuskegee Airman.” The couple were scheduled to talk about the book at the Bowling Green Performing Arts Center, but the event has been postponed to a later date.

Drs. Marsha Bordner and Harold Brown began in very different places and years apart, but when their lives’ trajectories brought them together in 1987, they formed a romantic and professional bond that has lasted for 30 years. They have built strong legacies as pioneers in Ohio higher education and as role models for women, African-Americans and the power of hard work to achieve success.

Bordner, president emerita of Terra State Community College, and Brown have collaborated on a book about his service in the United States Army Air Force. 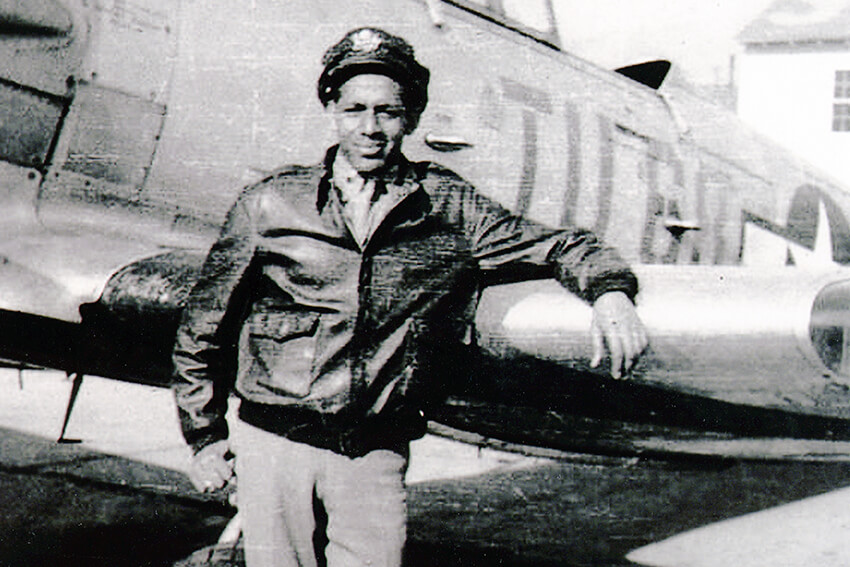 Published in August by the University of Alabama Press, “Keep Your Airspeed Up: The Story of a Tuskegee Airman” chronicles Brown’s experiences with the fabled World War II military fliers, the first African-American pilot squadron. It also shares his life after the war, as a career military man and later a leader in Ohio higher education and community service.

“As an English major, I know a good story when I hear one,” Bordner said of the decision to undertake writing the book. “What drove me and what was my passion was that this group of men changed the course of history; they were the leaders in civil rights long before the ’60s. I knew it was important not to lose their stories.

“This is entirely Harold’s tale, and I’m the weaver of the tale.”Tuskegee Plane

Bordner, who holds bachelor’s and master’s degrees from Bowling Green State University and a Ph.D. from Ohio State University, said, “I appreciate my BGSU education. It made me a better writer, editor and critical thinker.”

Brown, 93, was born in Minneapolis and fell in love with airplanes when he was in the sixth grade. He wanted to become a military pilot — an aspiration that was not available to black people at the time. He lived in a fairly integrated community for most of his young life.

“I didn’t know what segregation was in Minnesota,” he said. “We had Polish, Swedish, Jewish, Mexican kids in our small, K-6 school and our neighborhood. Then the Depression came and there was 35 percent unemployment. Suddenly with the war, things were working in my favor. Doors were wide open for youngsters to enlist in the military.”

His older brother was drafted in 1942, and his parents realized he would be next.

“At first only those with college degrees could train to become pilots, but soon so many were needed that they accepted people with only a high school degree,” Brown said. “I was 17 when I passed the exams and was accepted. The good news was, I would get to fight the war the way I wanted to.”

He enlisted and entered military flight training at Tuskegee, Alabama. Although it allowed him to achieve his dream of being a pilot, Tuskegee also placed him squarely in the middle of Southern anti-black discrimination whenever he ventured off base — a situation that would persist long after the war. Life outside the eventually integrated military did not keep up with life within it, Brown and his fellow airmen found.

But in his “Red Tail” squadron, as they were known for their planes’ signature markings, Brown was part of the crucial effort of escorting the heavy bombers deep into German territory on bombing raids.

“If it seems harsh and barbaric now, it was just the job we had to do to the best of our ability,” he said. “You accepted the fact that this was a war of survival. We were there to protect the bombers and get them up and then home safely.”

Today, among his numerous speaking engagements, Brown travels about with the Red Tail Squadron, an inspirational group of veterans who teach children and adults about the war and service to country. Their mottos are: “Aim high. Believe in yourself. Use your brain. Be ready to go. Never quit. Expect to win.”

Perhaps it was those directives that helped get him through the war and impelled him to accomplish all he has in his life. But sheer bravery must be among his qualities as well.

Brown is a three-time survivor of crash landings; only one of them truly frightened him, he said.

“In the first one and in the second one, I was under complete control. In the third one I was not in control,” he said.

That occurred when he crashed in the United States while he was an instructor on a training flight after the war. The pilot of the plane he was in and the pilot of a second plane unwittingly flew straight toward one another in heavy cloud cover until it was almost too late. Miraculously, one chose to turn his plane down and the other up, avoiding a head-on collision, but at 3,000 feet above the ground their planes clipped and they came down.

After all the perils he faced during the war, “I didn’t want to die so close to home!” Brown said.

The other two crashes occurred during the war. The first time, he managed to land on an abandoned airstrip after being hit my enemy fire.

“It was damaged, but my skills allowed me to bring the plane down safely,” Brown said.

Near the end of the war, he survived a second attack by parachuting out of his plane, only to be faced by an angry mob of citizens “who clearly wanted to kill me,” he said.

“We were trained to get as far away from the target as we could if we crashed,” he said. “After all our bombing of their territory, when you come floating down they get a little upset, to say the least,” he said wryly. “I was looking death in the face, and I said to myself, ‘You’re going to die at only 20.’”

He was saved by a local constable who walked him to another village where they barricaded themselves in a little pub. The constable even put a round in Brown’s rifle, and they stayed there until military police picked him up and took him to a prisoner of war camp.

They waited impatiently in Le Havre, France, at transition Camp Lucky Strike, where they were deloused, showered and given new uniforms before being shipped back to the States — where, despite their heroism in the war, the Tuskegee Airmen faced “the same old, same old segregated rules whenever we stepped off base,” Brown said.

After a 23-year career fighting in World War II, serving during the Korean War and representing his country in the Strategic Air Command, he left the military as a lieutenant colonel and earned master’s and doctoral degrees. Having many years’ experience teaching adults, he made a smooth transition to higher education, he said. He retired as vice president for academic affairs at Columbus State Community College.

Like Bordner, he was devoted to equality and making opportunities available to more people, beginning with what was then the technical college system.

Bordner and Brown’s writing collaborations go back to when they met. He came to serve as interim vice president for academic affairs at what became Clark State Community College in Springfield, Ohio, where she was an academic dean.

“So, technically, Harold was my boss,” she said humorously.

His charge was to facilitate the school’s transition from a technical institute to a community college, part of a statewide movement toward expanding the mission of its technical colleges in order to increase opportunities for students.

“Marsha worked with one other person on research and she was an outstanding writer,” Brown said. “With her Ph.D. and her English degree, she had the skills. We put together a five-chapter proposal for the school.”

They helped the school develop numerous degree programs that would articulate with state four-year colleges and provide a pathway to higher educational achievement, leading Clark State to be viewed as a model for other technical schools in making the transition to community college.

Both eventually moved on to other colleges, maintaining a long-distance relationship amid busy schedules until about 10 years ago, when they finally were able to settle together in Port Clinton, Ohio.

From the time they met, Bordner was intrigued by his stories of his war experiences and, after they married, began writing them down, recording his and his brother’s reminiscences and collecting memorabilia. Over their 30 years together she gathered “tons of information,” Brown said.

But as a busy college president, it was hard to find the time to do anything with it all.

“After I retired in 2012, it was time to write the book,” she said. “I had Harold’s stories and I added a fair amount of history on my own to place it all in its historical context. The stories are all his and the writing is all mine.”

Their paths might never have crossed but for their shared values. Bordner said that after obtaining her degrees, she almost went into social work but, believing “everyone should have a shot at higher education,” she chose that path instead.

“I felt that the two-year college system was a good fit for me. And working with students who had not had educational opportunities really touched my heart, and I saw that with hard work and support they could succeed.”

Bordner eventually rose to become president of Terra. Under her leadership, the college converted to the semester system; raised $2 million for a capital campaign; built a new skilled-trades center; completed a major renovation project that created a wing for music and the arts and another for nursing and allied health; and developed several new programs in health careers.

In June 2011, the college’s board of trustees renamed a recently renovated campus building the Marsha S. Bordner Arts and Health Technologies Center. She was BGSU’s 2012 August commencement speaker.

Bordner and Brown will be among the keynote speakers for the BGSU/Bowling Green “Beyond the Dream” events in honor of Dr. Martin Luther King Jr. Their presentation will be held from 1 to 2:30 p.m. Jan. 12 at the Bowling Green Performing Arts Center at Bowling Green High School, 530 W. Poe Road.