Solungga Liu to perform at the Library of Congress 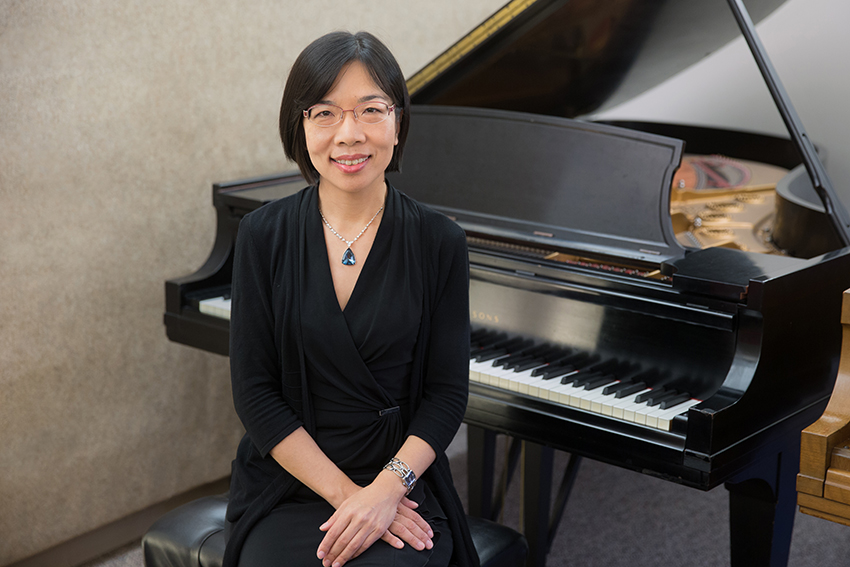 Little did pianist Solungga Liu dream seven years ago when she released a CD of music by the late composer Charles Griffes that it would result in her being invited to perform at the Library of Congress in Washington, D.C. But on Nov. 4, Liu, a professor of music performance studies at Bowling Green State University, will not only give a concert there but will also premiere a Griffes work never before performed in public.

Part of the mission of the concert series is to feature works housed in the library, Liu said. The intimate, 500-seat concert hall in the stately Thomas Jefferson Building has been the site of many eminent premieres, including Aaron Copland’s “Appalachian Spring.”

Liu’s recording of music by the early 20th century American composer Griffes was admired by a concert manager who serves on the program committee of the library, which houses the manuscripts of the work, and when this year’s performance schedule was being planned, unbeknownst to Liu, he recommended she be included.

The committee’s initial reaction was negative, she later learned, since the library typically only invites very prominent performers and rarely individuals from academia. But the concert manager persisted and played them the CD. That promptly changed their minds, and Liu was invited, joining a group of world famous musicians on the series.

“This is one of the reasons why I love this country so, so much,” said Liu, who is from Taiwan. “It’s not because of my hierarchy or my age, if they respect you they give you the opportunity. I am treated the same as the other musicians, and I am very honored to be invited. When I received the invitation I was so surprised and happy, and I’ve been nervous for nine months, but I wasn’t allowed to release the information until they did.”

She also had freedom to set the program, which will feature three of her favorite composers who represent different aspects of Romanticism: Griffes, Amy Beach, and César Franck.

“Griffes is so unique it’s hard to describe,” she said. “It’s a combination between Romanticism, Impressionism and later even a little bit of atonal. He caught the 1918 Spanish influenza, he struggled and then died in 1920.

“He only lived 35 years but he wrote many amazing works. He experimented with everything within 10 years, and then he died. He was born in 1884, before Amy Beach, but he died long before she did.

“One of the most important aspects about this concert series is that they highlight works in the library, and this turned out to be very significant in terms of Griffes,” she said.

The composer’s 1915 transcription of the second movement of Claude Debussy’s orchestral work “Iberia” — “Les Parfums de la Nuit” — had only been performed once, at Schirmer Music Publishers in New York, for an audience of two editorial staff, but never publicly because of copyright law at the time, even though Griffes very much wanted to publish it. Long held by scholars and later in textbooks to have been lost, the original manuscript was rediscovered in the Library of Congress.

“I couldn’t sleep for several days because of this,” she said. “Griffes the composer and his work mean so much to me, and now I have this significant connection to him: I have his manuscript! The national library of the most powerful country in the world, it’s just so generous, and they made an engraved copy for me, and I can read it.”

Beach, who bridged the very grand late Romanticism and Impressionism during her long career, was celebrated in her time despite the considerable constraints upon women in public life, but, like Griffes, has fallen somewhat into obscurity. Liu welcomed the opportunity to bring her work back to the concert stage to mark the 150th anniversary of Beach’s birth with a performance of two of her evocative piano works, including the “Ballade.”

“That’s a piece that I love so much,” Liu said. “His work is chromatic; it’s very difficult to play because it’s contrapuntal, it’s almost like sacred church music, and if you miss a note you can get lost. The manuscript is also in the library and it’s one of their treasures,” Liu said.

Though unexpected, the timing was of Liu’s invitation to the series was fortuitous. She was on sabbatical last year when she learned of it. She spent the time in Melbourne, Australia, where her sabbatical project was to prepare a CD of music by Beach, comprising her solo piano quintet and pieces of chamber music.

“I had a quiet year in isolation and silence to prepare for the concert,” she said, although she also did collaborate with Australian colleagues there while working on her projects. “I came back a better teacher because of the year.”

The time to concentrate was welcome, she said. Solo pianists perform without the aid of sheet music, so not only must they perfect their interpretation and rendition of the pieces, but also memorize every note.

“It involves the brain, the physical and the courage to perform onstage. That’s how I teach my students,” Liu said.

Getting ready for a major performance, “You must train like an athlete, and develop your stamina and your focus. You have to eat well, exercise and sleep, but at some point it becomes more mental. But once I get onstage, I forget about everything and it’s all music. The nerves only make me extra focused.”

She will have the support of BGSU while on the Library of Congress stage, since in the audience will be a contingent of University alumni, College of Musical Arts faculty colleagues, current and former students and friends.

Before her Nov. 4 concert in Washington, Liu will have the chance to perform the program, with the exception of the Griffes premiere, at the Musical Arts Series at Southeastern Oklahoma State University in October.