Summer Experience: Shelby Gelhaus has sights on helping others 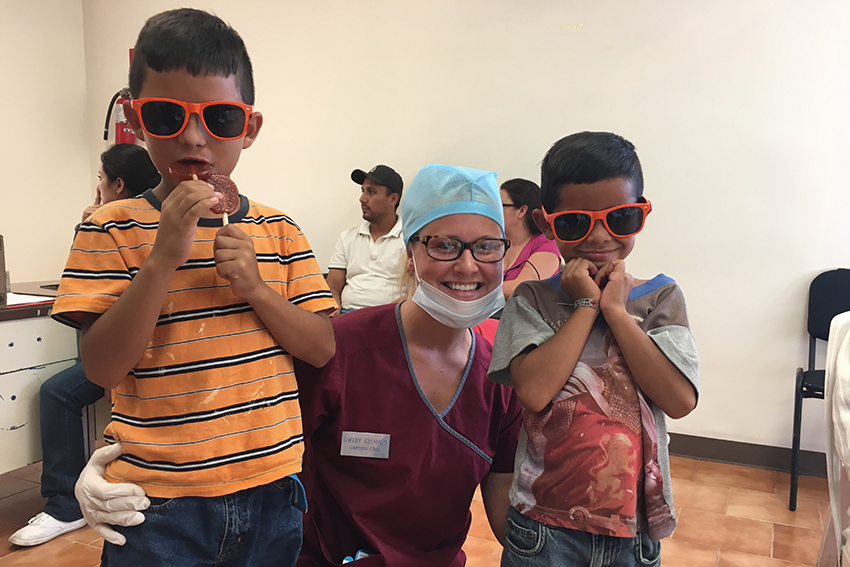 For as long as I can remember, I have always enjoyed helping others. In 2015, I became interested in mission trips but didn't have the opportunity to take one until this summer. While I was working for a local optometrist in my hometown of St. Henry, Ohio, over the summer, he and I happened to get on the topic of a program called VOSH (Volunteer Optometric Services to Humanity). After he briefly explained to me what it was and what they do, my mind was triggered.

I went home that evening and researched the program more in depth. VOSH is a “non-profit organization with a mission to bring vision to every person on the planet” — especially those who do not have local access to quality eye care and local support. I thought to myself how perfect if I could go on one of these missions because it ties right into my major as well as my passion for helping others.

From there, I pulled up the remainder of the clinic dates for the summer and thought that there would be no way for me to go on a trip with it being such short notice. I emailed Dr. Tom Pruett, the administrator of a specific clinic date, and explained to him what I was interested in. He emailed me back the next morning asking that I have an application submitted within two days and explained that if I decided to go I would be joining a group of optometry students from the University of Houston College of Optometry as well as many other volunteers, ophthalmologists and optometrists from across the country. I was thrilled and I booked a plane ticket right then to Guerrero, Mexico.

I left for Guerrero, Mexico, not knowing a single person. I fell in love with the people, the patients and everything else the clinic had to offer. I flew to Houston to meet the rest of the group at the airport, and from there we flew to Chihuahua, Mexico. We spent the first day and a half in Chihuahua exploring before heading out to Guerrero, where the clinic was located.

Once we arrived at the clinic, we were given a tour followed by orientation. Doors were to open at 8 a.m. the next morning for the first day of clinics, but patients already started to line up outside at 6 a.m. Little did I know that we would see patients until about 9 that evening. We repeated this schedule for the next two days, and let me tell you, the patients were so very grateful for us. By the end of the clinic, we had provided 433 eye exams, 109 cataract surgeries, two ectropion surgeries, 33 retina services, six iridotomies, five yags, 12 argon laser applications, and dispensed 96 pairs of reading glasses and 210 custom-made glasses — all at zero cost to the patients. Is that not amazing or what?

One of the fun contributions to the trip was the opportunity to share BGSU sunglasses with so many of the visitors to the clinic. The University Libraries generously donated the sunglasses for the trip, and they were a huge hit! The majority of our patients were 30 years old or older but occasionally we did serve some young children. When I would see a young child in the waiting room, I would walk over to them and introduce myself and then proceed to hand them a pair of BGSU sunglasses. Almost every time I did this, someone else would notice and then ask for a pair or two to bring back home to their children. Something as small as an orange plastic pair of sunglasses made those kids’ day. As for the remainder of the sunglasses, anyone who came back to the optical area to pick out a pair of glasses also received a pair of sunglasses, mostly to protect their eyes, which had been dilated during their exam. The clinic went from a Wednesday through Friday, but the sunglasses were completely gone by the end of the day Thursday!

For me, this trip served two purposes. In addition to being my first mission trip, the experience also helped cement my career goal. I decided during my senior year of high school that I wanted to be an optometrist. I have yet to second-guess that decision, and after this trip, I do not think I will ever regret choosing to do this for the rest of my life. A majority of the patients who came in had not been able to see for 20-plus years — this was normal vision to them. Whether it was a pair of glasses or surgery that restored their vision, seeing their faces reassured me that I am where I need to be today. The patients had come to the clinic seeing one world and would walk out seeing a whole new world.