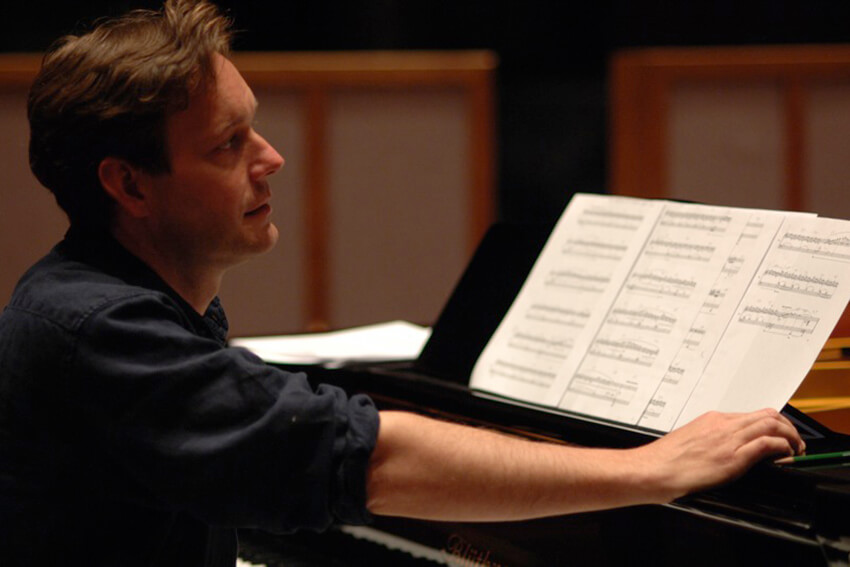 Heggie is the composer of the operas “Dead Man Walking,” “Moby-Dick,” “It’s a Wonderful Life,” “Great Scott,” “Three Decembers,” “Out of Darkness: Two Remain,” and the choral opera, “The Radio Hour,” among others. He has also composed nearly 300 songs, as well as chamber, choral and orchestral works. The operas – most created with writers Terrence McNally or Gene Scheer – have been produced on five continents.

“It’s a real privilege and honor to work with young people when they’re open to the perspective of someone else.”

The San Francisco-based composer recently was awarded the Eddie Medora King prize from the University of Texas at Austin Butler School of Music, and the Champion Award from the San Francisco Gay Men’s Chorus. A Guggenheim Fellow, Heggie has served as a mentor for the Washington National Opera’s American Opera Initiative, and is a frequent guest artist at universities, conservatories and festivals throughout the United States and Canada. He and Scheer are currently at work on “If I Were You,” based on the Faustian story by Julian Green, for the Merola Opera Program’s 2019 season.

Heggie is excited to return to Ohio, where he lived from ages 5 to 16 growing up in the Columbus suburb of Bexley.

“That’s where I started taking piano and composing,” he said. “We moved there from Los Angeles and then we moved back to California when I was 16, but most of my formative experiences as a musician happened when I was growing up in Ohio.”

Heggie will be fully embedded with BGSU arts students during his residency as he lends his perspective to aspiring performers, composers and creative writers.

“Working with students is very important to me,” he said. “Anything to work with young people who are looking to find their way in this field because I was one of them at one point and always looking for guidance and information about what the next steps might be or how I could broaden my perspective of the world of performance and composition. Any insight I can give back to them, I feel it’s my responsibility. It’s also great fun, and it’s a privilege to do it.”

In his message, Heggie wants to let students know that there isn’t typically a direct path to a music career.

“It’s a very winding path and it’s going to have a lot of life’s stuff thrown into it,” he said. “To show that, I usually tell my own story because there was a point where I never thought I would have a life in music — that was in my late 20s and early 30s. My music career took me by surprise and found me, which was kind of a miracle, but it also involved staying ready and alert and passionate and being tenacious about a dream. If there are any words I can give to inspire them, that it’s not always going to be this easy but you will find a life associated with music if that’s what you really want.

“I try to tell the journey and be very honest about it and the problems that happened along the way and the obstacles that there were to overcome, and also the great heroes and mentors I encountered along the way. There are always heroes and mentors along the way, it’s just that you have to be able to recognize them because they turn up in surprising places. Anything I can do to along those lines, because that’s sort of life information and how people get their life and their career going. For 99 percent of the population, it’s not going to go the way you thought it was going to — it’s going to take you in a different direction. But that might not be a bad thing; you just have to be open to it.”

Heggie will give the series keynote lecture at 8 p.m. Sunday at the Thomas B. and Kathleen M. Donnell Theatre in The Wolfe Center for the Arts. He will give two talks Monday afternoon in the Donnell Theatre and conduct two workshops and a master class Tuesday in the Marjorie E. Conrad, M.D. Choral Room. For times and more information about his talks and workshops, visit the Creative Minds website. All events are free and open to the public.

“I’m excited to meet with the students and work with them,” said Heggie, whose residency is made possible by Mary Cranker and her generous donations to the Edwin H. Simmons Creative Minds Endowment, an annual series intended to elevate the importance of the arts in our everyday lives. “I can give them some insight on something that they could do from a perspective that could make it better or easier or clearer. We’re all looking for clarity and authenticity.

“It’s a real privilege and honor to work with young people when they’re open to the perspective of someone else. And to go back to the state where it all started for me, that will be great fun, too.”