Dancing her way into nursing 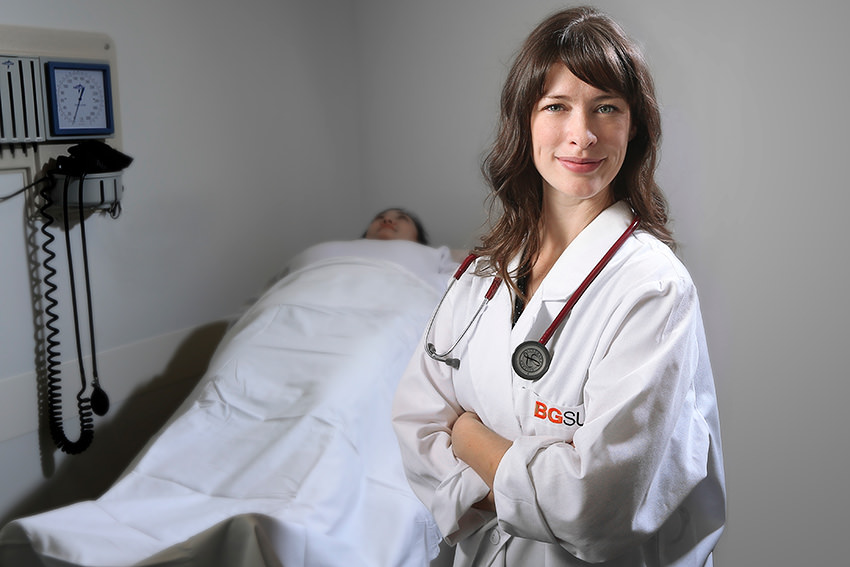 Jennifer Goodman has been a dancer for nearly her entire life. She loved it so much that she turned it into a career, dancing at venues such as the Metropolitan Opera in New York and the National Opera of Bordeaux in France.

She has seen and traveled the world through dance, but is now pursuing another passion: a career in nursing. Had it not been for her love of dance, Goodman might not have chosen nursing as her next career path. A knee injury at the age of 15 and the extensive therapy she went through, piqued her interest in the medical field.

“My therapists were helping to rehabilitate me and get me back to being stronger than I ever was before I was injured, and I was really inspired by them,” said Goodman, who recently received her acceptance letter into Bowling Green State University’s school of nursing.

After her knee healed, Goodman continued dancing but was still interested in going into the medical field. While in high school, she signed up for an executive leadership program that allowed her to pick a career path and shadow someone in that field. She chose an emergency room.

“It was really amazing to work with radiologists, nurses and even trauma surgeons who would take me under their wing,” Goodman said.

Goodman eventually obtained a job as a registration clerk at the hospital and even started out in a pre-med track at the University of South Florida. But she wasn’t quite ready yet to make the commitment.

“I knew I wanted to be creative and there was this calling in me to dance again. I knew that I needed to pursue that while I was young,” she said.

Goodman received her bachelor’s degree in fine arts at USF and moved to New York to pursue her master’s at NYU’s Tisch School of the Arts.

As soon as she graduated, she worked for a full-time repertory company, the Carolyn Dorfman Dance Company, for three years. She performed, toured and taught dancers from grade school to professional levels. After that, she freelanced and appeared in productions with the Mark Morris Dance Group at the Metropolitan Opera and with Christopher Williams Dance at the National Opera of Bordeaux, among others.

“I got to do all of the things that I wanted to as a dancer,” she said.

In between her freelancing gigs, Goodman worked as a personal trainer at a New York boutique studio. It was during that time, that she re-injured her knee.

“It was very tough on my body, not only was I teaching high-intensity fitness classes, but I was also teaching ballet and modern classes. You know, you can only push your body so far,” she said.

Once again, Goodman went through rehabilitation and therapy and became more interested in pursuing her dream job in the medical field.

“Realizing that my dance career had a time limit, I asked myself, ‘What do I really want to do next?’” she said. “I thought, ‘I want to be a nurse,’ that’s just what came to me.”

Goodman’s experience working in the emergency room helped her understand the indispensable role that nurses have in delivering care.

“They play such an important role in getting people back to their health. They’re with patients all the time, and I want to help people in that way. I can connect with that,” Goodman said.

Eager to get started, she began taking classes at Borough of Manhattan Community College. Around that same time, Goodman and her husband, Joe, who worked as a freelance producer/director, were looking for a big change.

“We had been in New York for over 10 years. The city is wonderful, but you can lose sight of things once you get into the grind every single day. You can feel like a hamster on a wheel, just trying to pay the rent,” she said. “We were ready to try a new way of living, re-focusing our goals.”

The opportunity for Goodman to go to school full time opened up when her husband was hired at WBGU-TV as a producer/director. It was their chance to leave the big city and come to Bowling Green.

Goodman enrolled at BGSU and started classes last January. This month, she received her acceptance letter into the school of nursing. Returning to school at the age of 33 as a non-traditional student has, so far, been an easy transition.

“The experience that I had, the work that I did in New York has helped me appreciate the schooling I’m getting. Having been out in the workforce for so long, I know the value education offers,” she said. “BGSU has that sort of energy and the people here are alive and eager to learn and the teachers are eager to teach.”

Goodman hasn’t completely stopped dancing. While going to school, she continues to teach ballet at a dance company in Bowling Green before she eventually lands her dream job as a registered nurse in an emergency room.

“I feel like BGSU is really going to give me the opportunity to excel, contribute and make my dream come true,” she said.