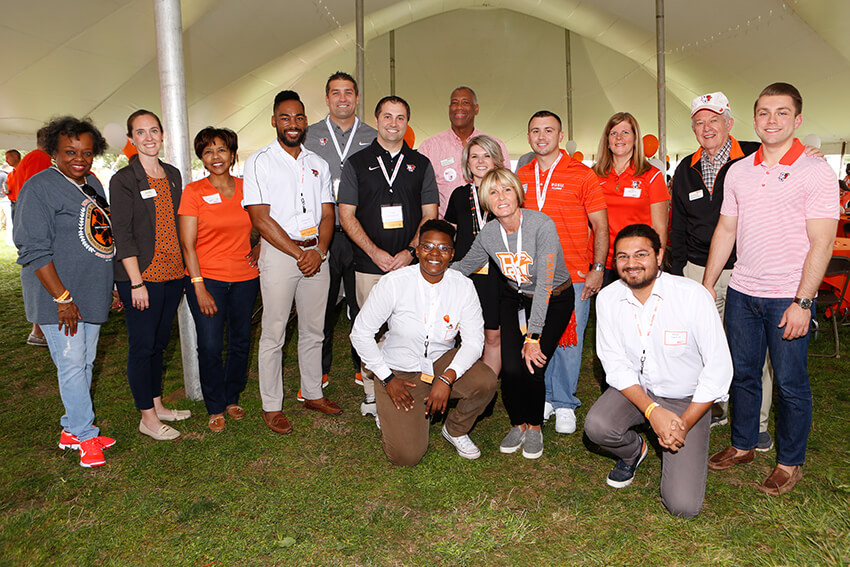 From teachers and thinkers, to entrepreneurs and creators, leaders and visionaries, risk takers and dreamers, recent Falcon alumni are changing lives for the world. To honor the accomplishments of our recent alumni, the BGSU 10 Under 10 Award has established in 2017. The inaugural class was honored during Homecoming on Oct. 14. Congratulations to the 2017 10 Under 10 honorees:

Capt. Vincent “Gino” Georgetti ’08
A former Freddie Falcon and member of Phi Delta Theta, U.S. Army Capt. Gino Georgetti majored in mathematics, specializing in actuarial science. Commissioned through the BGSU Army ROTC program, he has spent the last nine years serving in the Army, including a tour in Afghanistan. He earned his master’s degree in education, and volunteers as a high school football coach. He also has been a member of the Cleveland Warriors service organization for the past seven years. Georgetti was awarded the Military Outstanding Volunteer Service medal, and serves as the senior full-time officer for the 113th Engineer Battalion, the Lean Six Sigma Master Black Belt for the Indiana Army National Guard. He currently is working with the Counter Drug Taskforce to remove abandoned structures in Gary, Indiana.

Dr. Cory Haberman ’08, ’09
Dr. Cory Haberman earned a bachelor’s and master’s degree in criminal justice during his time at BGSU, and has gone on to become an assistant professor of criminal justice at the University of Cincinnati. Haberman is a published author and researcher, with a primary interest in environmental criminology and police effectiveness, with a focus on understanding why crime occurs, when and where it occurs, and then how to use that insight to improve police effectiveness. Haberman is a 2014 recipient of the National Institute of Justice’s Graduate Research Fellowship, and his work has been published in journals such as Criminology, Journal of Experimental Criminology and Journal of Research in Crime and Delinquency.

Lindsey (Nelson) Self ’10
Lindsey Self double majored at BGSU in psychology and sociology in the College of Arts and Sciences, and is currently continuing her education in law school. A former Alpha Chi Omega at BGSU, Self is now certified as a senior professional in human resources and volunteers with Legal Aid of Western Ohio as well as Advocates for Basic Legal Equality. She currently holds a position at First Solar as a global talent acquisition analyst, and is working with a diversity and inclusion focus in her workplace. She also recently delivered a TEDx talk during which she discussed unconscious bias and its effect on women in the workplace.

Tiffany Smith ’13
Tiffany Smith earned a Bachelor’s of Arts in intercultural communications from Bowling Green State University and a Master’s of Art in integrated global communication with an emphasis on the African Diaspora at Kennesaw State University. Throughout her higher education, Tiffany worked to create a more intersectional and inclusive environment at the universities she attended by focusing on issues of anti-blackness, misogyny, homophobia and transphobia. Her work earned her the 2013-2014 Outstanding Graduate Student award presented by the African and African Diaspora Studies program and 2014-2015 Presidential Commission on Racial and Ethnic Dialogue R.O.H. Social Justice Award, both from Kennesaw State University. Tiffany is a founding member at the National Center for Civil and Human Rights and in June 2017 joined the Multicultural Services and Programs team at the University of Georgia.

Terry Streetman ’09
A former Freddie Falcon, Terry Streetman was a creative writing major in the BGSU College of Arts and Sciences. After graduating, Streetman continued his service efforts as a BGSU Alumni regional network leader, a member of the Young Alumni Council and a #BGSUOneDay ambassador. Streetman was one of the founding members of the Young Professional Alzheimer’s Advocates of Lansing, Michigan, and was additionally involved with the Miracle League of Michigan as a Miracle League Mascot. He currently works as a development specialist at the Alzheimer’s Association in the Nebraska Chapter.

Rebecca Tirabassi ’09
Rebecca Tirabassi is the author of the book "Let Prayer Change Your Life," in which she discusses how to go deeper into prayer and how it can help benefit your life. Following the publication of her book, Tirabassi returned to BGSU to earn her bachelor’s in liberal studies with a concentration in communications, and proceeded to speak at her commencement ceremony. She has made appearances on the CBS "Early Show," ESPN and the Golf Channel, and has also served as a guest chaplain for the U.S. House of Representatives. Tirabassi and her husband have started their own church in California, where they serve as co-pastors.

Dr. Elaina Williams, D.O. ’09
After graduating summa cum laude from BGSU with a degree in applied health science, Dr. Elaina Williams received her medical degree, with honors, from Ohio University — Heritage College of Osteopathic Medicine. She has gone on to practice as a family physician for Ashtabula County Medical Center, a Cleveland Clinic Affiliate. She takes pride in serving the residents of Ashtabula County through her position as a physician in addition to participating in LEADERship Ashtabula and the Ashtabula County Carbon Monoxide Symposium. Additionally, Williams volunteers at several community events, including working as an on-site physician for high school football games.

Peter Winovich III ’08
A former student-athlete, Peter Winovich III was also an active member of the BGSU College of Business where he earned his degree in financial economics. Currently a Financial Advisor for Wilcox Financial/Wilcox Financial Sports Management, Winovich is also chair-elect on the BGSU Alumni Board of Directors. Over the past few years, he has obtained six consecutive qualifications for Million Dollar Round Table including Top of The Table. Wilcox Financial/Wilcox Sports Management represents more than 2,500 corporate and personal clients in 39 states and 12 countries. Winovich has helped grow the Sports Management niche to more than 300 clients in his nine years with the firm.

Arpan Yagnik, Ph.D. ’15
While at BGSU, Dr. Arpan Yagnik was heavily involved in programs aimed at alleviating conditions of women suffering due to menstrual stigma. As an international student, from India, he completed his doctoral degree in media and communication studies. A well-published author and researcher, Yagnik now tackles creativity enhancement and its role in leadership, governance, business, and resource optimization. He delivered a TEDx talk in 2016, where he offered a new way to speed up the creative process through the technique of Creative Aerobics. Additionally, his co-authored book, titled “Creative Aerobics: Fueling Imagination in the 21st Century," was released recently. Yagnik is currently a faculty member at Pennsylvania State University, where he is an assistant professor of advertising. His motto is “action inspired by creativity.”