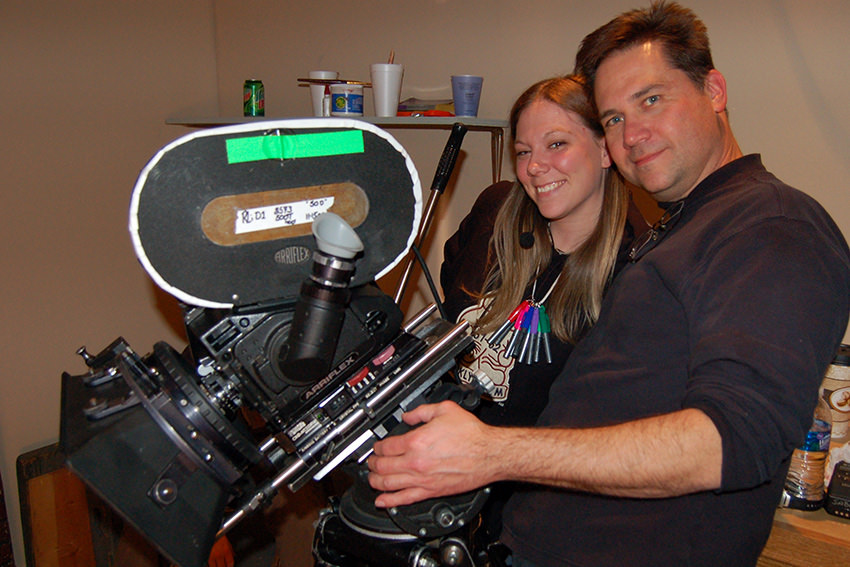 Picture this: A patient escapes a mental asylum, only to find a disturbing, supernatural world on the outside.

"The movie is scary, creepy," Cardenas warned, making it perfect for Halloween.

Perhaps one of the last B movies to be shot on film, "Asylum of Darkness" was written and directed by Cardenas' former classmate Jay Woelfel. Two other former classmates, Scott Spears and Bill Pivetta, also worked on the film, as director of photography and assistant camera, respectively.

"We help each other out when we can," said Cardenas, who also worked on Woelfel's film "Closed for the Season," another horror movie, which was produced by BGSU alumnus Jay Ellison '04.

Cardenas' first film with Woelfel, "Beyond Dream's Door," also a horror movie, received kudos for cinematography, came in first place in a film festival and was made into a feature film.

"There are a lot of long hours," Cardenas said, "so you'll find that a lot of crew members like to work together again because they get along and have fun."

Cardenas already was planning to watch "Asylum of Darkness" being shot in Columbus, Ohio, when Woelfel recruited him for second unit director of photography. He said the role includes shooting anything outside the main action, usually with extras. It is more efficient to film movies with two crews, especially if the cast and crew have limited time in a particular space.

"I enjoy second unit," Cardenas said. "You come in for a little bit, a couple times, a couple days, and get your general shots."

This could include time-lapse shots or, in this case, practical effects shots, which are completed without computer-generated imagery. There was no script for Cardenas' part, which is unusual, but from working with Woelfel before, he knows what to shoot.

"I prefer seeing a script, but this is a strength of mine," Cardenas said. "I can make it up as I go along. I know how to get shots to edit."

Part of Cardenas' routine includes getting to the set before anyone else arrives. This gives him time to look around, think about the storyline and come up with ideas.

Besides shooting, he said his favorite part of the process is "solving for X."

"What if this, what about that," he said. "We're constantly looking at the plan and working to keep on schedule and budget."

In addition to being in charge of the look of the movie and providing agreed-upon deliverables, Cardenas is taking care of the crew.

"You are the intermediary between the crew and the director," he said. "Sometimes, you have to speak up for them."

The "Asylum of Darkness" crew included BGSU alumna Allie Toman '07, who was Cardenas' production assistant and camera assistant on the film.

Cardenas teaches production fundamentals, field production and editing fundamentals and advanced production in the School of Media and Communication . He also ran a summer workshop, "Narratives in Film and Television Production."

"The students who took the workshop, Jay Ellison and Allie Toman included, state it was one of the most intense educational experiences they had at Bowling Green, truly preparing them for the industry," Cardenas said.

While he's worked primarily on PBS documentaries and horror films, Cardenas would love to do a serious drama. He said he watches foreign films and gets inspiration from Italian horror films.

"I am looking for a new project," he said. "I'd like to do a drama or a documentary."

In the meantime, fans can watch "Asylum of Darkness" and "Closed for the Season" on Amazon Prime.