Always ready for a challenge

BGSU alumnus Jeff Boutelle ’85 is the new CEO at Pharmavite 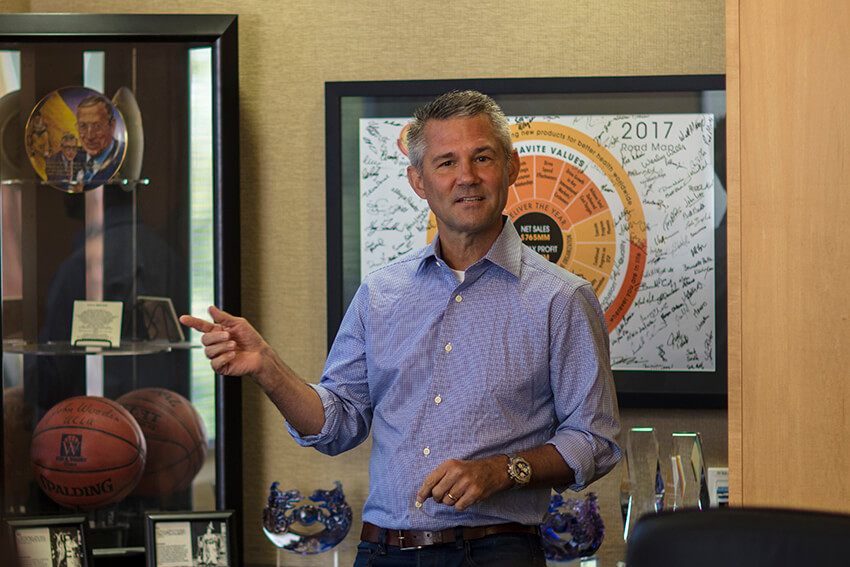 Jeff Boutelle has worked for some giant-sized companies with thousands of employees — Procter & Gamble, Abbott, Nestle, Ernst & Young, and University Hospitals of Cleveland. But the Bowling Green native and 1985 graduate of Bowling Green State University never felt like he would get lost in the sea of corporate humanity inside those environments.

“There are great opportunities in these big companies, but they are also places where you can kind of fade into the background, so the important thing is to find a way to have an impact,” Boutelle said. “I never viewed myself as a ‘big company’ person. I’ve always felt I have been a small company entrepreneur working for big companies, but I was comfortable in the environment. The common thread is that there are opportunities out there, and you just have to avail yourself to them.”

Boutelle, who earned degrees in accounting and in management information systems, said some people can find a certain comfort zone operating in the anonymity of a huge company, but he is not adverse to stepping outside that realm and taking on significant challenges and a higher profile with smaller entities.

In 2012, he took on the role of president & CEO of Beech-Nut Nutrition Co., which at the time was beset with a declining market share, profit losses and significant employee morale and union relations issues. Boutelle led a transformation of the Beech-Nut brand that stabilized the business, introduced innovations to the product line, strengthened the employee morale and expanded the company’s market share.

“The move to Beech-Nut involved taking on a big challenge, but I love challenges. I’ve found that if there aren’t challenges or problems I will go find some to resolve; I have a constant drive toward improving,” he said. “At Beech-Nut, it was a major undertaking, but essentially it was a case of convincing people that you can win by doing the right thing, and sticking to that.”

The next challenge for Boutelle is taking over as CEO at Pharmavite, a California-based leader in the health and wellness industry. The company serves consumers, healthcare professionals and retailers with quality vitamins, minerals and herbal supplements through the Nature Made® and FoodState brands. Pharmavite maintains a strong position in the marketplace and does not face the same hurdles as Beech-Nut, but Boutelle will still be called upon to lead the company through a critical transition.

“This isn’t about turning a business around or saving one — this is about charting the path forward at Pharmavite,” he said. “People my age have grown up taking supplements and vitamins from a bottle, but millennials think about nutrition differently and they are consuming food differently. We need to determine how Pharmavite can uniquely deliver superior nutrition for consumers in the future.”

Boutelle expects his broad range of experience with companies such as Abbott, Nestle and Beech-Nut, along with his strong accounting background, will serve him well in the new post.

“One of the things I’ve learned working in food and health-related fields is just how little people know about nutrition and its impact on health and wellbeing, so they make poor food choices, and that leads to things like cardiovascular disease, Type 2 diabetes and other issues,” he said. “Working in nutrition and health is a passion for me, but also this is a fertile ground to really do something good for people.”

Before taking the CEO post with Beech-Nut, Boutelle was a vice president with Abbott Nutrition International, serving markets in Europe, the Middle East and Africa from his base in London. Prior to that, he worked as the division vice-president and general manager with Abbott for U.S. Pediatric Nutrition.

“There are great opportunities in these big companies, but they are also places where you can kind of fade into the background, so the important thing is to find a way to have an impact.”

He was senior vice president for marketing and communications with University Hospitals of Cleveland, vice president of marketing for Stouffer’s, Nestle USA’s largest brand, and was a brand manager for Procter & Gamble. He got his start in public accounting at Ernst & Young. After earning his two BGSU degrees, Boutelle added an MBA from the Fuqua School of Business at Duke.

Boutelle’s father, Clif, was an administrator at the University and Jeff grew up on Summit Street close to campus. He attended BGSU hockey games, ran track and cross country at Bowling Green High School, played on the BGHS 1980 state championship hockey team, and took piano lessons at the University.

Boutelle chose to study accounting at BGSU because he felt it would provide a strong foundation and background in how businesses work.

“I’ve had Bowling Green in my blood since we lived here and my dad put a lot of his life into the University. I knew I wanted to go into accounting and I also wanted a school with a good running program, so BGSU was the obvious best choice,” he said.

Boutelle carried the two majors, ran indoor and outdoor track, and met his wife, Cathy, during his time at BGSU. He characterized the time as “a busy but enjoyable four years.”

“Meeting my wife there was certainly a big part of the equation,” he said. “Moving from one place to another and making these transitions as a family, for our children, requires a strong partnership, and I’m blessed to have that. I also benefited from some great professors and instructors at BGSU. They were very good mentors, and they helped me connect all of the dots in my education and bring everything together.”