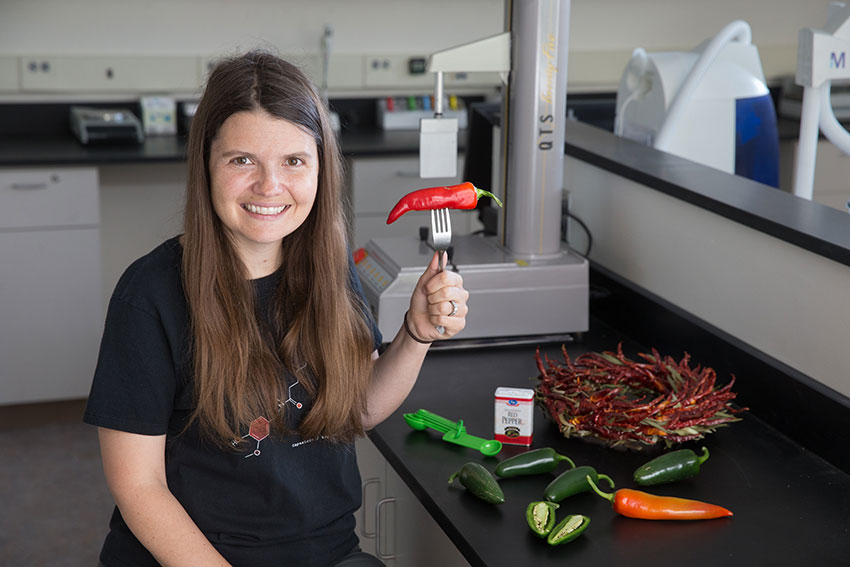 Feel the burn. No pain, no gain. These sayings are usually associated with strenuous exercise, but for Dr. Mary-Jon Ludy, they refer to the effects of hot chili peppers on appetite and energy expenditure.

Ludy, an associate professor of food and nutrition at Bowling Green State University, was quoted in a recent CNN story about foods that suppress appetite, including avocado, barley, spinach and soup. She has been studying chili peppers and other pungent spices since graduate school to determine whether they do indeed decrease appetite and also whether they increase the number of calories burned and the length of time between impulses to eat. She has published extensively on a variety of aspects of the topic.

In this time of rising obesity and worry about weight, people tend to look for anything that can help. Although there is no “super food” to make eaters magically lose pounds, there are some foods whose properties may have positive effects, Ludy said.

“It’s easier for people to think of adding things to their diet than of taking things away,” she said. “They’re much more receptive to foods that have benefits than to eliminating foods.”

Americans are increasingly embracing more flavors and international cuisines, she said, and people’s acceptance of spiciness is changing. Some Asian cuisines include fiery hot chilies, often at a level not palatable to Westerners but completely safe to eat.

In chili peppers, the burn comes from capsaicin, a plant compound. Ludy’s research shows that the maximum effect is gained by eating 10 grams, or two tablespoons of capsaicin, but that level is definitely not tolerable to most people, she said, and is very painful.

“We need to look at realistic doses,” she said. “Most people can easily tolerate one gram, or a half-teaspoon. Three grams can even be comfortable for people who like spiciness.”

Even the one gram can produce the result of curbing hunger, burning more calories, and reducing the desire to eat salty and fatty foods. But, she cautioned, the number of additional calories burned is only about 10, which can also be burned by walking around for a few minutes.

“You’re not going to cure obesity by eating hot chilies but if you like them, they can be a helpful addition to your diet,” said Ludy, whose Ph.D. in nutrition was focused on ingestive behavior.

The key to the desirable effects seems to be that the chemical burn stimulates the body’s “fight or flight” response, Ludy said. Receptors in the mouth get turned on and ramp up the metabolism by stimulating the sympathetic nervous system. This perhaps explains why the effect is significantly greater in response to eating peppers containing capsaicin than from simply swallowing a capsule of it. These receptors are also in the gastrointestinal tract, she noted, but they elicit less of a response than does oral stimulation. A related compound, capsiate, that is found in some sweet peppers, also has a reaction in the gut increasing calorie burn, but it is more modest.

“The effect from taking it orally may also have to do with how the capsaicin interacts with the ‘food matrix,’ or other parts of your meal,” Ludy said.

It may also be related to the spiciness being a “novel stimulus,” she said, and could fade as the body becomes accustomed to it. In that case, eaters might consider “pulse dosing,” where you eat the food for a period of time and then stop and come back to it later, or experiment with recipes containing different levels of spice.

“Chemesthesis” is the term for the chemical burn from eating spicy foods, one of the three components of the chemical senses that make up the overall experience of flavor. Fully 70 percent of taste is actually smell, Ludy pointed out, and the rest comes from the taste buds.

In addition to the burn, other factors she measures are “satiation,” or how long a meal goes on; “satiety,” or the time between eating episodes; and “thermogenesis,” the number of calories burned after eating. True hunger and the desire to eat are separate phenomena, she said, as is the sense of fullness. You can feel full after a meal but still desire to have dessert, she and co-author Dr. Richard Mattes of Purdue University wrote in a book chapter on “Chemethesis and Health.”

Conversely, Ludy has also studied and published on the role of pungent spices in stimulating appetite and pleasure in eating among people whose interest in food and ability to taste has been diminished by disease or old age, or who have difficulty swallowing and may need to make a restrictive diet more palatable.

Although the individual effects may be small, Ludy hopes that incorporating beneficial foods into the national diet can have a positive impact on health and wellness.