Dr. Julia Wildschutte is taking a new look at the canine genome 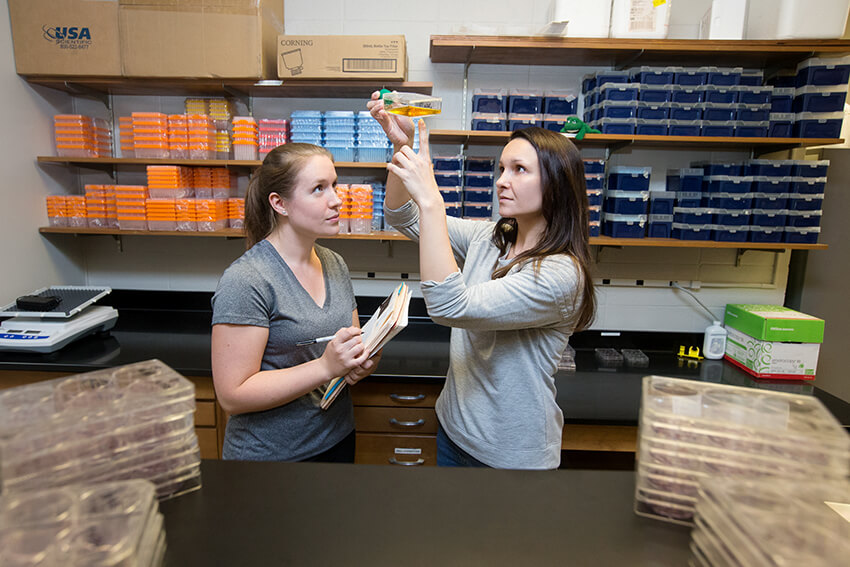 Dr. Julia Wildschutte, an assistant professor of biological sciences, is taking a new look at the canine genome, and her research is beginning to reveal that some long-held held beliefs about what it contains may not be entirely accurate.

A specialist in virus-host interactions, Wildschutte has a $300,000, three-year Academic Research Enhancement Award from the National Institutes of Health to study "The Properties and Impact of Endogenous Retroviral Elements to the Canine."

“When a retrovirus infects a cell, it integrates a DNA ‘copy’ of its genome, or ‘provirus,' into the nuclear genome of that cell. This means that if a retrovirus is able to infect a germ cell, the provirus may inadvertently be passed onto offspring. And this unlikely scenario has happened a lot in mammalian evolution. Fully 8 percent of the human genome is derived from retroviruses. In mice, it’s about the same. But dogs are interesting,” she said. “In dogs, it’s only .15 percent. How did it happen that dogs have missed such a rich history of retroviruses infecting their germ line?” she said.

“It’s such an unexpected finding, and there’s so much that I expect will come out of this work from both a scientific view and from a biomedical view.”

Wildschutte became interested in these elements, termed ‘endogenous retroviruses,' during her doctoral work at Tufts University, and continued in the field as a postdoctoral fellow at the University of Michigan. There, she was part of a three-university team examining a type of endogenous retrovirus in human genomes known as HERV-K, which is thought to have possible roles in certain diseases. In evolutionary terms, HERV-K is relatively young, having infected our ancestors in the last 150,000-200,000 years. The team found a completely intact provirus, along with numerous other bits of ancient retroviruses, within human DNA genomes. Wildschutte was co-first author on a paper the team published in the Proceedings of the National Academy of Sciences about their discoveries and characterizations of HERV-K.

Endogenous retroviruses have been part of the human genome for millennia. Once a retrovirus has inserted itself into a cell’s genes, “if it survives, a copy of it can be passed down forever in every single cell of an offspring,” Wildschutte said. But far from them always being harmful, during human evolution we have “borrowed” elements of the retroviruses for useful purposes, and now these ancient HERVs play important roles in everything from implantation of the embryo into the uterus to regulating the enzymes needed for specific tissues.

“These retroviral remnants are evolving as part of us,” Wildschutte said. “Some of the integrations are amazing.”

Endogenous retroviruses that have entered the germ line at some point in evolution also contribute to genetic diversity, she said. Her postdoctoral research team looked through global distributions of 2,500 individuals from a global sampling and indigenous genomes for evidence of variable presence of these HERV insertions and compared them against the human reference genome. The insertions leave an identifying “signature” on the DNA sequence.

She has expanded her interest in host-virus interaction and retroviruses to a different model system — the canine — and has applied the sophisticated techniques and analysis that her former team performed on human virus genomes to the canine and other species in the canidae line, which includes wolves, jackals, coyotes and other related groups. What she found has only deepened the mystery and further intrigued her.

“This raises the possibility that canines, and their ancestors, are somehow able to evade such retroviruses, and we don’t know why. Not a lot of research has gone into that yet. That’s something that is really interesting to me. I foresee some of research going in that direction.”

Nonetheless, evidence that retroviruses did indeed exist in canine ancestors can be inferred by examining the genomes of contemporary canids for the presence of endogenous retroviruses. She and her team searched through roughly 350 canid genomes, including DNA from breed dogs (pets), “village dogs” (scavengers), wolves, coyotes, jackals and other outgroups.

They found an unexpectedly high amount of genetic variability and insertions of endogenous retroviruses in those samples. In addition, “these insertions were obviously from an evolutionarily recent circulating virus, within the last several hundred thousand years,” she said. “It was a very similar analysis to our HERV-K that previously infected human genomes.”

She is preparing to publish the findings from this first round of discovery.

“This was something in the field that was unexpected, and people really didn’t expect to find this high variability of these endogenous retroviral insertions in dog genomes,” Wildschutte said. “Plus, they had the signature of being fairly new. It’s sort of like a new lineage and it is seems to be specific to the canidae lineage.”

Based on her recent findings, it’s possible they are, Wildschutte said.

Though never explored, there have been inklings over the years of possible endogenous retroviruses in dogs.

“There were a few reports, maybe 15 or 20 in all, of observations of retrovirus-like particles (not infectious) in some dog tumors and in tissues from dogs that had lymphoma or leukemia,” she said. “Other groups have reported either seeing the particles or having detected reverse transcriptase activity encoded in the virus and expressed. Once the virus infects, it’s the enzyme that converts the RNA genome to a double-stranded DNA copy. They reported having detected these signatures of a retrovirus. But it really wasn’t substantiated and observations were never strongly followed up.

“I think it’s possible that the expression people observed in those dogs and other signatures of a retrovirus having been present are from this group of endogenous retroviruses we’ve just characterized.”

In humans, this most recently infecting HERV-K is upregulated in several different types of cancers and diseases. It’s not entirely clear what consequence this has, Wildschutte said, but this is an active area of research.

“The regulation of the endogenous retroviruses in diseased tissues is very different that you would observed in otherwise normal cells,” Wildschutte said. “So a question is: Are the retroviral proteins contributing to that state, or is the expression just a consequence, or even if it is, does it still have an impact?”

“This dog group is very new, and while I wasn’t expecting to find so much variability of insertions in dogs, it’s there. What I’m interested in now is to investigate the prevalence and patterns of these elements and their expression in canine tissues.”

Wildschutte said she has a talented graduate student, Abigail Jarosz, in her lab, who will also be staying at BGSU for her Ph.D. Jarosz’s master’s degree project is looking at canine tumor tissue, extracting RNA and genomic DNA from the cell lines, genotyping the cell lines and cloning RNAs expressed from the new group of endogenous retroviruses, and starting to build phylogenies based on the genes that she’s cloning from these viruses. This will help identify and group similar gene sequences and help reveal which endogenous retroviruses are being expressed in which different types of tumors and in nonrelated tissues. “We have also begun examining the individual viral genes and what their functional potential is,” Wildschutte said.

Also on the project is undergraduate researcher Malika Day, who performed much of the sequencing and validation of results.

Wildschutte sees this as the beginning of a long line of research possibilities.

“It’s such an unexpected finding, and there’s so much that I expect will come out of this work from both a scientific view and from a biomedical view,” she said.