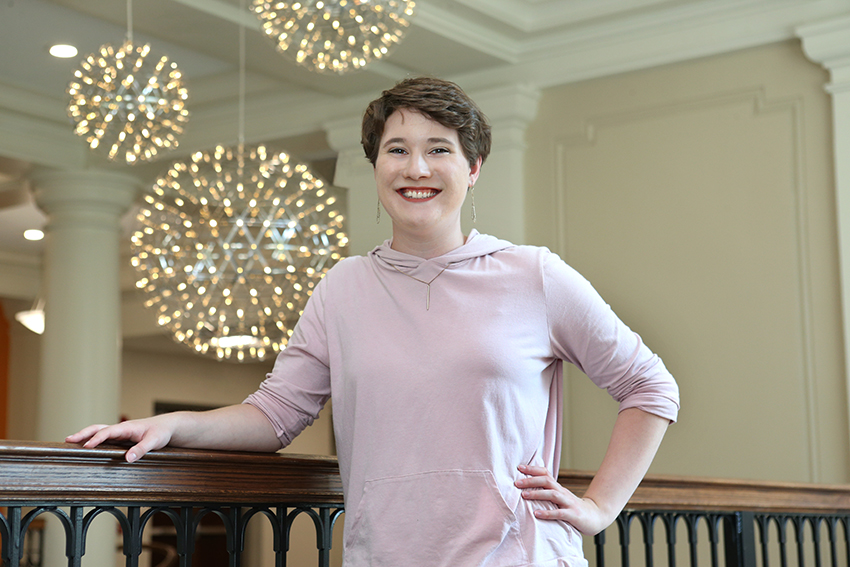 Christina Furia was homeschooled from the day she started her primary education until the day she graduated. Attending Bowling Green State University is the first chance she gets to spread her wings.

And what does she want to be? A teacher.

Furia, who grew up in West Chester, Ohio, near Cincinnati, is majoring in inclusive early childhood education.

“I want to be a teacher, and that stems from me volunteering at my church with the kids there and in child care,” she said. “I just realized that teaching seemed like the right profession for me because I was able to reach them. It’s just a really interesting experience seeing the kids learn and interact with each other.”

It was only recently, right about the time she became an 11th-grader, that Furia figured out she wanted to be a teacher. Before her epiphany, she thought she might want to do something in the arts or as an administrative assistant.

“I used to be big into artwork and drawing and then I was really into being an organized person,” she said. “I realized those are things I like and enjoy, but if I want to make something I enjoy my career then it has to be teaching because teaching kids and watching them learn and develop, that’s where my passion is.”

Furia is the youngest of five children, and three of her siblings — everyone except for her oldest brother, Dennis — attended BGSU: Rob, Douglas and Annie. Douglas lives in Toledo, which is an added benefit for Christina.

“Three of my siblings have gone to BGSU before me, and they all had just really positive experiences there, not only with the University itself but the community too,” she said. “Also, when I visited the campus, it just felt like this is the place I need to be and the University’s education program is amazing — so it really fit me and my needs.

“I toured BGSU with Van Wright (assistant to the vice president for strategic enrollment planning), and he’s awesome. He hooked me up with people in the community to speak with and learn from about the campus and everything that’s available there. I just found that the community was so welcoming and there was a lot for me there, so it felt like this could be my second home.”

Furia, who earned a 4.0 GPA in high school, also is a member of the Honors College. She relishes the challenge.

Even though she was homeschooled, the classroom experience won’t be a completely foreign concept to Furia.

“It’s going to be a new experience, for sure, but homeschooling isn’t all at home anymore,” she said. “I’ve gone to several co-ops up until I was about a junior and then I started doing College Credit Plus, so I already have some experience with college classes. I feel I am going to benefit a lot from that experience instead of going into something new with a blank slate and actually living on campus and being here fulltime. It will be a little bit scary, but once I find like-minded people I’ll have a community here and I won’t be so worried about it.”

Furia likes to do art projects now and then, and lately has developed a fondness for writing short stories and poems. She plans to implement some of her hobbies in the classroom.

“I hope to be able to tell my students stories and teach them to open their minds and be creative,” she said. “That’s something I really want to be able to use with the kids.”