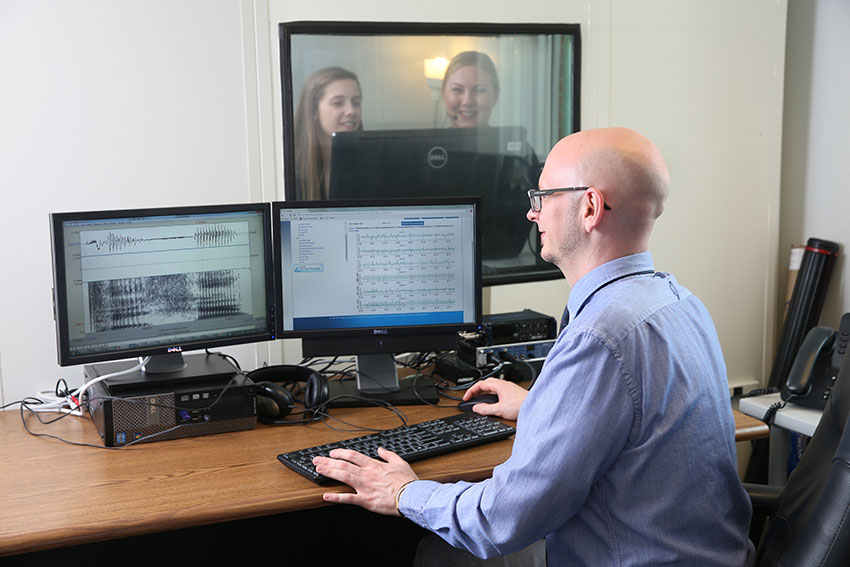 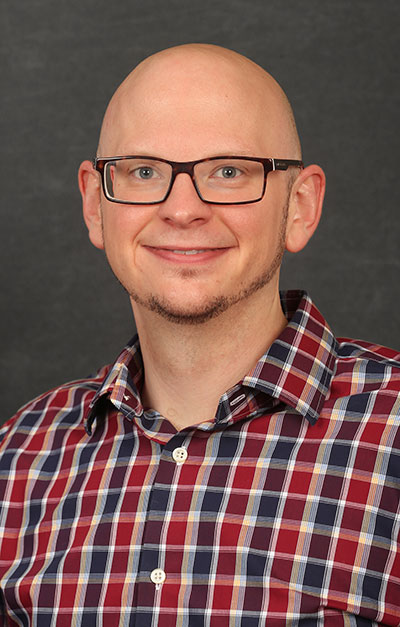 Parkinson’s disease (PD) is well known for producing tremors, muscle rigidity and a halting gait. But it can also affect speech, making it difficult to produce sounds and communicate clearly.

That is the aspect of the disease studied by Dr. Jason Whitfield, an assistant professor of communication sciences and disorders. He has presented and published widely on his research into how speech is impaired in PD, with the goal of improving rehabilitative techniques for individuals who experience communication difficulties.

“Parkinson’s disease varies widely among people, and, luckily, the effects on speech are usually fairly mild, but they can also be significant,” Whitfield said. “It can produce what we call disfluency, a stuttering-like disturbance in their speech. They can have trouble with initiation, or starting the movement to produce speech. My lab focus is on the juncture of speech motor control and cognition.”

Whitfield is the 2017-18 recipient of the Clyde R. Willis Faculty Development Award, presented annually to a College of Health and Human Services faculty member whose accomplishments best represent “a strong, balanced performance in the traditional areas of teaching, scholarship and service during the past calendar year, with particular emphasis on major accomplishments in research.”

Four of his journal articles have been published in 2017. This past year he also had nine, peer-reviewed presentations at national conferences, one of which was selected for a meritorious poster award, and the majority of which he co-authored with students, including undergraduates.

Including students in his research is extremely important to him, he said, based on his own valuable experiences as a student. His lab team includes two Ph.D. students, Anna Gravelin and Zoe Kriegel, and typically five to eight undergraduate researchers.

“As an instructor, Dr. Whitfield is highly respected by his students,” wrote department chair Dr. Lynn Hewitt in nominating him for the Willis Award. “His area of speech science and anatomy and physiology is one that some undergraduates find more daunting, and comments on his teaching from students indicate their high level of appreciation for his ability to break down complex material and make it understandable.”

In the Motor Speech Lab, Whitfield and his students study speech production and motor learning, which is what happens in the brain when practice or repetition of a movement enables the acquisition of a new motor skill. They also conduct acoustic analysis of normal and disordered speech, and have collaborated on this with Dr. Ronald Scherer, Distinguished Research Professor of communication sciences. Whitfield is in the process of developing and commercializing software for the acoustic measurement of speech.

He is in a new collaborating with Dr. Adam Fullenkamp, an assistant professor of exercise science, to examine lip and jaw movement using motion capture technology to see how speech movement and speech sound production are impaired in people with Parkinson’s.

This research resulted in Whitfield achieving the unusual distinction this year of having two manuscripts accepted on the same day to the most prestigious and selective journal in his field, the Journal of Speech-Language-Hearing Research. Both articles had to do with ideas on how motor learning and speech-motor learning is affected in Parkinson’s and how people with the disease are able to learn and retain novel speech utterances.

This second part of his research involves working with Parkinson’s subjects to see if practicing, or rehearsing, speaking clearly will help either maintain or improve their current level of speaking ability.

“Parkinson’s is known primarily as a ‘disease of aging,’” Whitfield said. “The average age of onset is 60-65 years. So, in Parkinson’s we’re not looking at speech development but at speech rehabilitation, helping people to relearn or alter their current patterns. It’s more about habit formation and changing the habitual bad productions to good productions.”

To test this, he is experimenting with having patients perform dual tasks of doing something with their hand while saying a phrase, and measuring their ability to do both things at once. Then they practice saying the phrase and making the hand motion again until it becomes comfortable and almost automatic for them. Next, Whitfield and his team again test their ability to perform the two tasks simultaneously.

“We’re asking, ‘How robust is the motor learning system in these patients? How can we expect gains to be retained? How robust it is to interfering demands?”

He and his students have published a paper on the effects of practice for people with speech impairment. “They do improve with rehearsal,” he said. “Everyone can get better with treatment, but no one can predict the progression of the disease.”

Whitfield joined the BGSU faculty in 2015 after teaching at Kent State University. He has two undergraduate degrees, in speech pathology and vocal music, from the University of North Texas; a clinical master’s in speech pathology, from BGSU, and a Ph.D. in communication sciences and disorders, also from BGSU. He has maintained a vigorous level of activity in addition to his teaching and research.

“Dr. Whitfield is performing excellent service to the department, university, and profession,” Hewitt wrote. “He regularly reviews for a wide range of rigorous journals in our field, to a degree exceeding that normally done by early career faculty.”